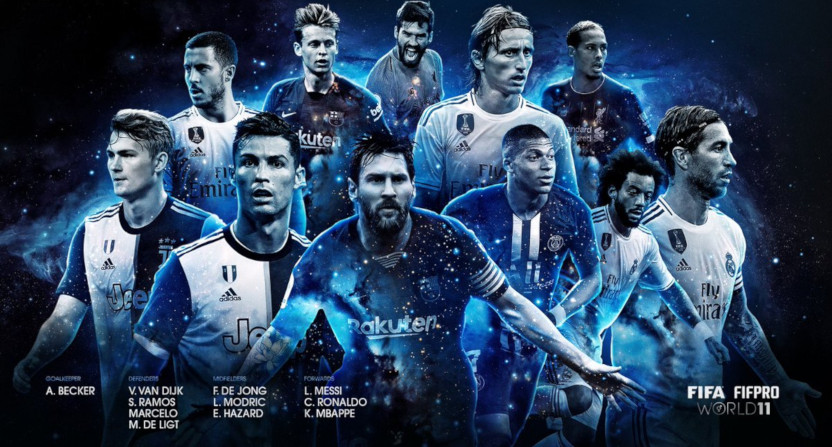 Voting for All-Star teams always has been and always will be a popularity contest. In a perfect world, every player would be treated equally no matter what team they play for or what kind of name recognition they may have, but this world isn’t perfect. And while it’s not like these made-up awards mean anything of any actual real value, they carry at least a little weight when it comes to evaluating the legacies and careers of athletes (and to helping boost those athletes’ contracts). How many times do you hear a player being mentioned as an “X-time All-Pro” or “X-time All-Star” in the first paragraph of their player bio?

All-Star or All-World teams are not exactly something that fans or athletes lose sleep over, but these votes do cause some reality-bending results.

We may chuckle at the results of All-Star fan votes or Hall of Fame ballots where the hometown sportswriter lodges a lonely vote for someone who has no chance. But the most bizarre All-Star vote may just be the FIFA World XI, which is voted on by thousands of players around the world.

FIFA announced their FIFPRO and it contained some head-scratchers. The entire team is as follows:

Congratulations to all! Well deserved! 👏🎉🎊

Much of those selections are deserved – Van Dijk and Alisson were the gamechangers that brought Liverpool back to its first Champions League title since 2005. De Jong and de Ligt were revelations for an Ajax team that made a Cinderella run through Europe. But there were a few choices that were puzzling.

Critics immediately jumped all over the selection of four choices from Real Madrid. Yes, Real Madrid is one of the most recognizable teams in the world and they’re just coming off of three straight Champions League titles. However, last season Real Madrid struggled mightily.

Real finished third in La Liga, 19 points behind Barcelona and 8 points behind Atletico Madrid. They were also embarrassed in the Champions League and knocked out in the Round of 16 by Ajax. In short, Real Madrid had a horrible season by their incredibly high standards. With Online Sports Betting this season, you could have won a lot of money betting against Real Madrid!

And yet, in spite of that, Real Madrid has more players in the World XI than any other team. Manchester City, who won the Premier League, FA Cup, and League Cup last season in the league that contained all the major European finalists, had zero representatives. Tottenham Hotspur, Champions League finalist, had zero representatives. It’s like the Knicks having the most NBA All-Pro selections while the Raptors and Warriors got shut out. (Ok, perhaps that’s an overreaction, but still the point remains.)

Particularly puzzling was the naming of Sergio Ramos and Marcelo to the World XI. Real Madrid shipped 46 goals in La Liga last season and saw Ajax put four on the board against them in the Champions League in the second leg in Madrid. As if the defensive numbers weren’t bad enough, Marcelo found himself on the bench for much of last season. He only appeared in 23/38 La Liga games and even admitted back in February that he was struggling with his own form.

“The level I have been showing is difficult to always maintain,” he added. “I am a little below that level at the moment, but my career has been like that, some little dips, and unfortunately this season I had three injuries in two months.

“I went through a difficult period in my football and within the club, but that phase is over now, I need to play to get back to my usual form and confidence.

Marcelo has been a great player for a long time, but the fact that he made the World XI over someone like Liverpool’s Andy Robertson (widely regarded as the world’s best left back at the moment) is preposterous. Imagine Eli Manning getting named to the Pro Bowl this season even after getting benched in Week 3 for Daniel Jones. That’s the kind of decision making we’re talking about here.

It’s September 2049, and the audience in Zurich give a round of applause to 61-year old Marcelo as he hobbles up onto the stage to collect his award for making the FIFA World XI yet again.

It’s almost tradition for the World XI vote to be widely panned as nothing more than a list of which players most people around the world have actually heard of before. But what else are you to really expect from a vote dependent upon soccer players around the world who are probably busy enough in their own professional lives? Soccer is actually pretty popular around the world and for anyone to have a grasp for who’s really “the best” when there is so much competition is almost impossible. Do we really expect a player in Finland’s second division to break down film and build a case for the inclusion of Bayern’s Joshua Kimmich or Napoli’s Kalidou Koulibaly?