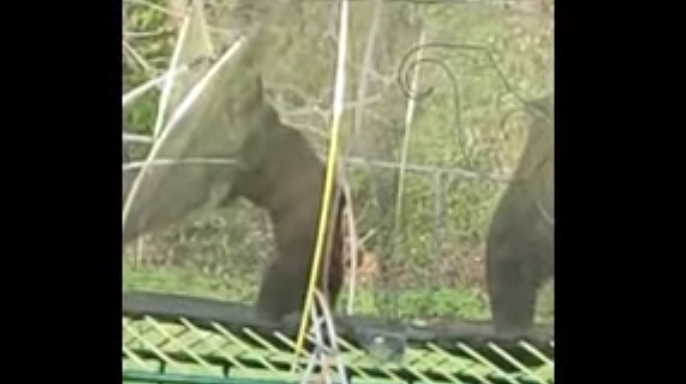 Trampoline wrestling has been a bit of a thing for a while, with current AEW wrestlers Matt and Jeff Hardy even starting the original Trampoline Wrestling Federation in the 1990s. And it’s seen a whole lot of unusual participants since then, but two of the strangest showed up recently on a backyard trampoline in Coquitlam, British Columbia. Here’s the video Rose Waldron took of two young black bears that entered her yard and wrestled on the trampoline on April 10:

Waldron’s husband Doug recently spoke to CBC News’ Akshay Kulkarni about this. He said they’re used to wildlife intruders, including bears, but these ones did leave a little bit of a mark on the trampoline.

Doug Waldron, Rose’s husband, says bears regularly visit the family’s backyard, which is located near a lake close to the Coquitlam River.

“That’s their bathing spot and their fishing hole. It’s their country,” he said. “They can come and go as they please. They don’t bother anybody.”

Waldron says bear visits have become so regular this spring that he leaves the gate open so any wandering bears don’t jump over his fences.

“We’ve been sitting around a picnic table, having coffee or whatever on an afternoon, and a mother and her cubs will come into the yard,” he said.

…The fibreglass rods that hold up the trampoline netting, however, cracked under the bears’ weight, with Waldron ruefully saying he’ll have to replace them.

“It’s good enough for somebody [weighing] 150 pounds or less, I’m sure,” he said, laughing. “But having 800 pounds of bear on your trampoline didn’t help things.”

As the CBC story notes, it’s important for those who see bears to avoid getting too close to them so the bears don’t get too comfortable around humans. It’s also important for homeowners in areas with bears to make sure their garbage cans and bird feeders are secured so the bears can’t access them. But there are still going to be bears that show up in yards even without food accessible. And these two decided to take advantage of the trampoline.