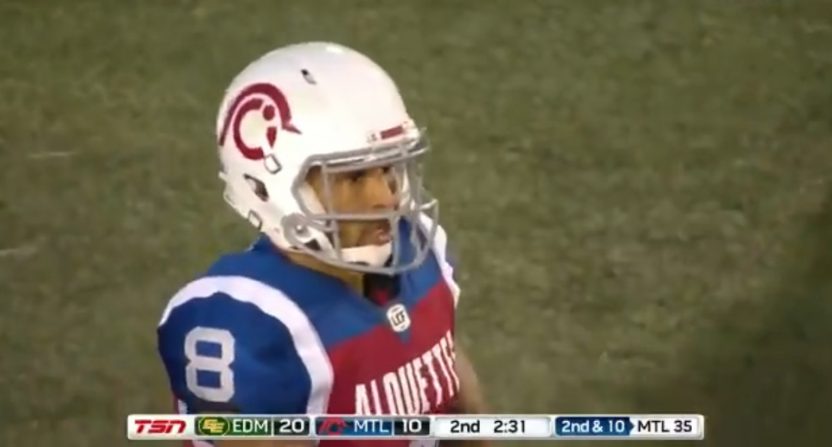 Last week’s CFL trade of Johnny Manziel from the Hamilton Tiger-Cats to the Montreal Alouettes has created a lot of excitement, especially with Montreal head coach Mike Sherman (who was also very briefly Manziel’s head coach at Texas A&M) announcing Tuesday that he will in fact start Manziel this week against Hamilton (Friday, 7:30 p.m. Eastern, TSN/ESPN2). But while many are excited to see what Manziel can do in his first regular-season CFL playing time, the man he’s replacing is not. In fact, Alouettes’ quarterback Vernon Adams Jr. (seen above; he had an impressive NCAA career in his own right with Eastern Washington and Oregon before coming to the CFL with Montreal in 2016) is not only upset at the coaches for benching him, he’s mad at the fans who chanted “We want Johnny!” during Montreal’s 44-23 loss to the Edmonton Eskimos last Thursday. Here’s a look at those chants:

And Adams’ remarks, as per 3 Down Nation’s translation of a La Presse article:

“Yes, it hurt me to hear that. I have nothing more to say or to give to the supporters of Montreal. Never again. Their behaviour was very disrespectful. It was not like I was playing badly. I do not want them to ask me anything, not even a small piece of equipment.”

…“I do not care what the situation is. It was a lack of respect and it affected me,” Adams said.

“But that’s fine, in the future, I’ll treat the fans as they treated me, that’s all. ”

Adams did apologize to Montreal fans Tuesday, saying he was just “emotional,” but those are still quite the remarks. And it’s interesting to hear those from a CFL quarterback, especially one who wasn’t lighting up the league with his own play; Adams completed just 15 of 28 passes (53.6 percent) Thursday for 217 yards with no touchdowns and an interception, so he doesn’t exactly have a whole lot of room to wonder why fans were chanting for his backup.

But this does perhaps go to show the larger impacts of Manziel on the CFL; chanting for the backup quarterback is a time-honored tradition, but that takes on extra importance when it’s a name like Manziel, especially considering how Montreal spent a lot to bring him in and presumably start him. And it’s understandable why Adams might be annoyed about that. That doesn’t mean he’s right, of course; if he wanted to retain his starting job and not have fans chant for his backup, he could perhaps have done that with a more impressive performance. And these kinds of comments raise questions about if Adams will be willing to serve as a backup to Manziel. But his frustration is notable, and it illustrates how the Manziel storylines are negatives for some.