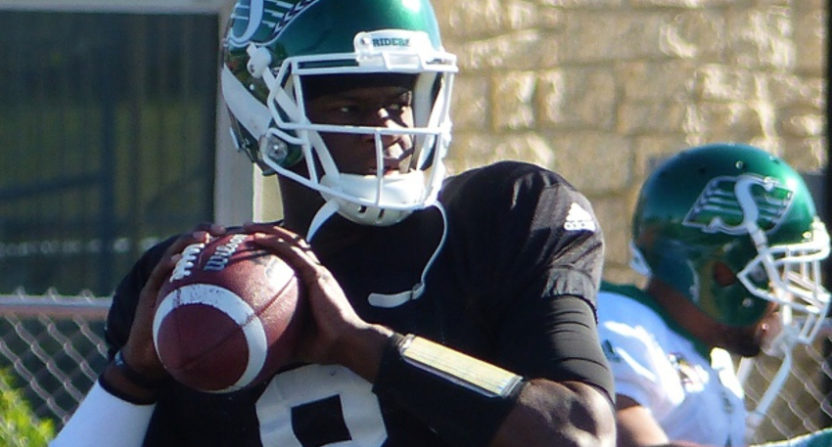 Former NCAA and NFL quarterback Vince Young’s time in the Canadian Football League hasn’t gone smoothly so far. Young hurt himself last week on a running play during training camp with the Saskatchewan Roughriders, and missed the team’s first preseason game Saturday against the Winnipeg Blue Bombers. On Monday, the team announced that Young’s injury is a torn hamstring, and that he’ll be out four to six weeks. That’s yet a further blow to his chances of making any sort of impact with this team this season.

Of course, it wasn’t a lock that Young would have done much in the CFL if he had remained healthy. He’s 34, after all, with his last real starting job coming in 2010 with the Tennessee Titans and his last real competition coming in 2011 with the Philadelphia Eagles (he then signed with Buffalo, Green Bay and Cleveland, but never made it out of training camp, and hasn’t even gotten that far since 2014).

And while Young’s running abilities were always impressive, there were big questions about if those would still be there at his age, and how his NFL career 57.9 per cent completion percentage and 46 to 51 touchdown to interception ratio would hold up in the passing-accuracy-focused CFL. Long before Young got hurt, most reporters covering the Riders’ camp pegged him as their third-string quarterback at best (behind long-time CFL veteran Kevin Glenn and promising 25-year-old Brandon Bridge).

The good news for Young is that the injury may actually make it easier to keep him around. With him out for four to six weeks, the Riders could put him on the six-week injured list, where he wouldn’t occupy a roster spot and his salary wouldn’t count against the cap. And as the CFL’s wealthiest team, they can more than afford to do that.

In fact, the Riders created a CFL firestorm last season by providing housing for players on a “pre-practice squad” which boosted their total to an estimated 95 or so players, well beyond the 46 allowed on the active roster. That led to them eventually being fined $60,000, so they probably won’t try it again. Still, they’ve shown that they’re willing to spend money on players who might possibly contribute, and they can certainly afford to pay Young to hang around if they feel his presence is worth it.

The other positive for Young is that quarterback Bryan Bennett, the Southeastern Louisiana alum and former Winnipeg backup who’s maybe Young’s chief competition for a spot, did not impress in that preseason game Saturday. As Joel Gasson wrote at 3 Down Nation, Bennett’s showing was anything but solid:

The former Blue Bomber practice roster quarterback was the talk of training camp heading into the game and when the lights came on, it didn’t translate. Bennett was seven for 15 for 82 yards. If that wasn’t enough, Bennett also had problems holding on to the football with three fumbles, losing two of them. Bennett will get another chance next week as there’s little point in bringing in another quarterback at this point in the pre-season. However, he will have to be much better.

It’s not just Bennett, of course, as the Riders also have former UNC quarterback Marquise Williams. But the 24-year-old Williams (who they just signed last month) is a much more impressive prospect at this point than the 34-year-old Young, and it would seem quite possible to keep both of them, perhaps with one on the practice squad.  The 25-year-old Bennett has a big age advantage over Young, too, but it’s conceivable to see the team eventually settle on one veteran (Glenn), two younger players (likely Bridge and Williams) and then Young. Bennett’s real competition for that spot for Young, though (if it even exists; CFL teams sometimes only keep three QBs, even if you count the practice roster), and so his struggles seem like a positive for Young’s chances of sticking around.

However, it’s going to be interesting to see where Saskatchewan goes from here. Young’s play in camp suggested to most observers that he wasn’t just going to instantly recapture his University of Texas magic, and it’s worth asking if it’s really worth it for the Riders to stick with him over younger quarterbacks. And that’s perhaps especially true now that they won’t even be able to see him in the rest of camp, or in their second preseason game. Once he does recover, it will be during the season, when games (and who gets reps in those games) have consequences.

If Young does manage to hang around and get healthy, there is a chance of him getting to play. The 38-year-old Glenn may have the most tenuous hold on a starting job of any CFL quarterback at the moment, as he hasn’t been overly impressive in the last few years. Still, the Riders might well choose to try their younger quarterbacks first. And it’s also possible that Saskatchewan won’t even wait for Young to heal, electing to move on with younger players first. We’ll see how it goes, but the severity of this injury certainly doesn’t seem to bode well for Young’s chances of doing anything notable in the CFL.