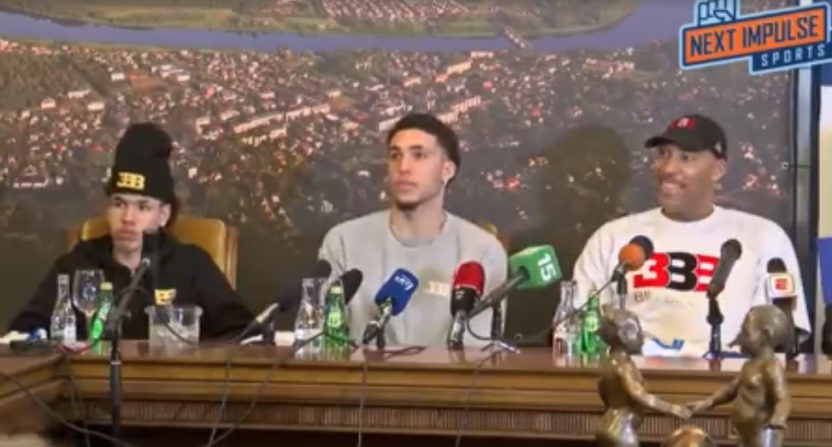 LiAngelo and LaMelo Ball’s arrival in Lithuania to play for Vytautas Prienai–Birštonas has been delightful so far, featuring father LaVar Ball promising that the sons will join older brother Lonzo on the Lakers in 2018 and a woman from a Lithuanian show hitting on LiAngelo during a press conference. And it’s getting even better.

In addition to competing domestically in the Lithuanian Basketball League, Vytautas has also regularly competed in the lower-level Baltic Basketball League against teams from other Baltic countries, and won the Elite Division there last year. But now that the Balls have arrived, Vytautas is pulling out of that competition for a five-game exhibition tournament called the “Big Baller Brand Challenge Games,” which will be aired on Facebook:

In another plot twist, Vytautas just withdrew from the Baltic Basketball League in the middle of the season and will organize the Big Baller Brand Challenge Games, a series of five friendly games, instead.

ESPN’s Jeff Goodman has more on the idea of the new tournament, which came about to give the Ball brothers some more playing time:

“We’re discussing a new tournament now to play five games here in Prienai in our arena,” the team’s general manager, Adomas Kubilius, told ESPN. “It would be with EuroLeague teams.

“We’re talking to teams like Zalgiris and CSKA Moscow about playing in it. It would be an opportunity for them to play more games, and play against players of similar age.”

The club officially announced (Lithuanian) the tournament’s creation Friday, but only with other teams from Lithuania instead of the EuroLeague teams the GM mused about. Here’s more on it from a release from Facebook:

Prienai-Birstonas “Vytautas” basketball club, the Lithuanian team LiAngelo and LaMelo Ball have signed with, announced today that they are creating the “Big Baller Brand Challenge Games” to tip off the professional careers of LiAngelo and LaMelo Ball and showcase some of the top young Lithuanian basketball talent to the world. The Big Baller Brand Challenge Games is a new series of five exhibition games played between Vytautas and professional clubs from across Lithuania.

The games tip off Tuesday, Jan. 9 at 1:30pm ET, as Vytautas plays Kauno Žalgiris-2. The full five-game broadcast schedule is as follows:

Withdrawing from a competition halfway through to play exhibition games is a bit curious, but it’s far from the strangest thing that’s shown up around the Ball family. And the Facebook partnership makes sense; there’s clearly a U.S. audience interested in watching how the Balls do, and maybe a global one, and the Balls already have had a successful partnership with the company thanks to their “Ball In The Family” reality show, which is currently in its second season. And filming in Lithuania, to the annoyance of some new teammates:

Not all "Vytautas" players like BigBallers reality show in Lithuania. Tomas Dimsa: "I don't like it. We are practising and there are hundred cameras. What for?"

But hey, it could be worse for those teammates. They could get a third Ball teammate:

*gets a personalized jersey made*

Relax, it's just a nice gesture from the club… Or is it? ?? pic.twitter.com/0dCfNJCTej

2 thoughts on “Vytautas withdraws from Baltic league for “Big Baller Brand Challenge Games” exhibitions, which will air on Facebook”