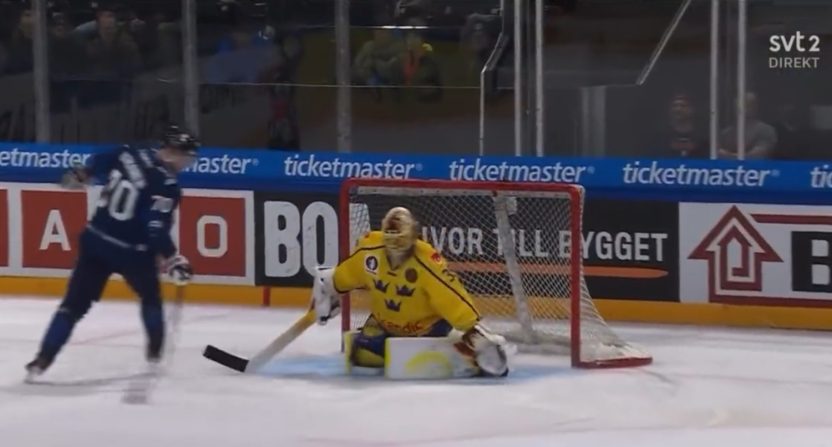 Hockey shootouts have produced a lot of memorable moments, in the NHL and elsewhere. The latest came in a Euro Hockey Tour matchup between Finland and Sweden this weekend, where Finnish forward Teemu Hartikainen tried an incredible one-handed move in the shootout. It didn’t go in, but his move still got people talking:

This is part of the larger ongoing Euro Hockey Tour competition between Finland, Sweden, the Czech Republic, and Switzerland. And Hartikainen certainly made this game memorable with his incredible one-handed move. The level of stick control he shows off there is remarkable. And that led to a lot of reaction:

It didn't go in but this is the nastiest move I've ever seen 😳🤯 pic.twitter.com/ioRI7EOcPH

Dear lord, Teemu Hartikainen, save some hands for the rest of us

Hope someone scores this some day https://t.co/iF93769UMQ

Talk about a blast from the past. I remember calling @TexasStars games against Teemu Hartikainen when he played for the Oklahoma City Barons (Oilers AHL affiliate). @CarterBaum @TheChrisWescott https://t.co/FIqnPb0Z8z

Hartikainen was the 163rd overall pick of the 2008 NHL draft by the Edmonton Oilers. He played some games with them and their AHL affiliate, the Oklahoma City Barons, over the years following that. He finished with six goals and seven assists in 52 NHL games and 35 goals and 66 assists in 164 AHL games. He’s also spent a lot of time in various European leagues. And he sure showed off some shootout creativity with this attempt. Yes, it didn’t wind up leading to a goal, and yes, Sweden wound up winning this shootout, but Hartikainen’s move here was still highly memorable.