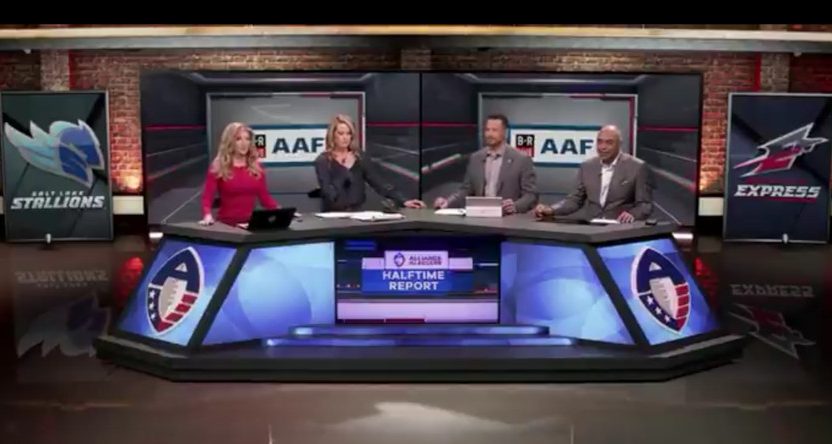 The Alliance of American Football’s third weekend has seen some remarkably empty stadiums, and that’s had plenty of people ragging on the league. And many figured that one of the league’s own broadcasters was criticizing it Saturday, when two separate audio clips circulating had Rod Woodson (working the halftime show for the Arizona Hotshots-Salt Lake Stallions game on B/R Live) saying some variation of “Nobody’s watching, nobody’s listening, nobody cares” twice on air, once on an open mic and once when the broadcast threw to the halftime show before they knew they were on the air. However, according to Alex Flanagan (who was on that halftime show with Woodson), this had nothing to do with the AAF at all, but rather with a story she’d previously told the panel about how a mentor used to help her get over her nerves with those comments:

In @TheAAF studios today telling Marvin Lewis a story of being young anchor at WSFA. To ease my nerves sports anchor Jeff Shearer would tell me “no one’s watching, no one cares, no one listens”. @RodWoodson26 laughed, said it back. that was aired & totally taken out of context.

Rod was laughing at the ridiculousness of me saying that, but I explained it helped me not get nervous if I didn’t worry what people watching might think. I feel horrible Rod is getting nasty tweets.

Woodson himself also commented on the Deadspin tweet of their story on this with a similar line:

Hot mics can sure miscapture a moment. A mantra. That’s what that was. @alex_flanagan & I both know viewership for AAF games is exceeding all expectations. I’m watching Memphis at Orlando right now. I hear Coach Spurrier is mic’d up, too!🎙 https://t.co/s55qZjt8Um

For the record, here are the clips in question:

Flanagan’s explanation there appears to make sense. Referencing a repeated mantra (and one that’s definitely been heard before in the TV ranks) seems more logical than Woodson repeatedly criticizing AAF viewership in an AAF halftime studio. (And for the record, the TV numbers were actually quite good in the first two weeks.) And what really makes it seem like this was more than just Woodson bashing the AAF was how he used almost the exact same mantra-style phrasing twice; it seems unlikely real criticism would have had that specific repetition.

However, those definitely aren’t remarks you want aired on the TV broadcast of a fledgling league, one that’s already facing a whole lot of financing questions. And this is at least the second time this week that a hot mic has gone horribly wrong. That’s a further reminder to be extremely careful when wearing a mic, even if you don’t think you’re on the air. At least Flanagan had a sense of humor about it, though.

One thing is fo’ sure folks….the @TheAAF is #ALLACCESS all the time! Just be happy you got the behind the scenes of @RodWoodson26 questioning me and not Marvin Lewis trying to imitate @aafhotshots Rashad Ross’ stanky dance.😂