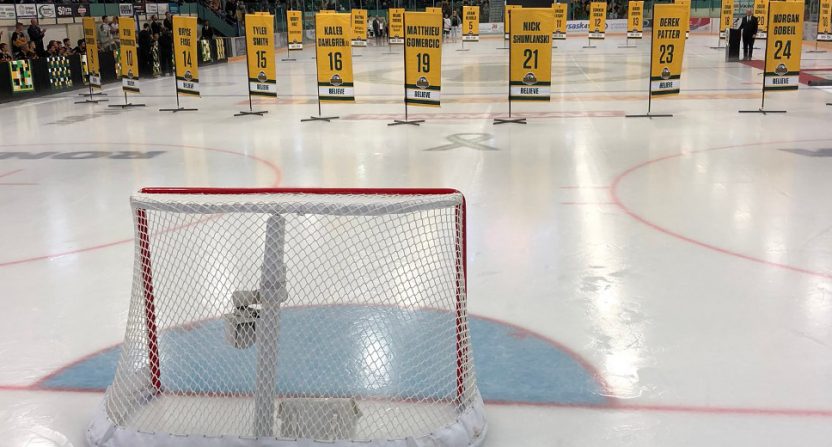 When tragedy strikes, it’s often also important to see how those affected rebuild. That was a focus of the TSN/NHL Network broadcast of the Humboldt Broncos’ Saskatchewan Junior Hockey League season opener Wednesday, which came just five months after the bus crash that killed 16: 10 players, two coaches, an athletic therapist, a volunteer statistician, a bus driver, and a broadcaster. It came after a whole lot of tributes, from the global “sticks out for Humboldt” to the GoFundMe that raised over $15 million,  to the CFL’s Saskatchewan Roughriders honoring victims at a game and putting #HumboldtStrong on their field for the whole season and Canadian NASCAR driver D.J. Kennington deploying a Humboldt paint scheme for a race. And the live-from-Humboldt broadcast brought a whole lot of emotions, as seen in some of these clips. First, here’s the ovation as the Broncos took the ice:

The @HumboldtBroncos get a nice ovation from the crowd as they take the ice.#HumboldtStrong pic.twitter.com/1lv8U7rdR9

That was followed by another ovation for players Derek Patter and Brayden Camrud, two of the crash survivors who returned to play for the Broncos for another year:

Patter and Camrud were then joined by injured former teammate Tyler Smith and other teammates for the ceremonial faceoff:

Derek Patter and Brayden Camrud were joined by Tyler Smith and their @HumboldtBroncos teammates for the ceremonial faceoff.

During the game, there were plenty of thoughtful tributes from TSN, including one to broadcaster Tyler Bieber that included clips of his calls:

There was also a nice tribute to volunteer statistician Brody Hinz:

And there was a great story from Christina Haugan, wife of late Broncos’ coach and GM Darcy Haugan:

During the game, the Broncos got the first goal, and the arena erupted:

The @HumboldtBroncos get the opening goal of the season, courtesy of Michael Clarke! #HumboldtStrong pic.twitter.com/iC1ez72VEl

They would lose 2-1 in the end, but that wasn’t all that important. The end of the game saw a salute from the whole team:

The @HumboldtBroncos salute the crowd following the conclusion of their season opener. #HumboldtStrong pic.twitter.com/6cxjnYZ8VH

And then Patter and Camrud gave their sticks away:

This ended with a post-game ceremony, and with 29 banners being placed on the ice for those who were on the bus:

It’s great to see an event like this documented this way, and kudos to TSN and NHL Network for covering it in such depth. Our thoughts are with all those affected by the tragedy as they continue to recover.