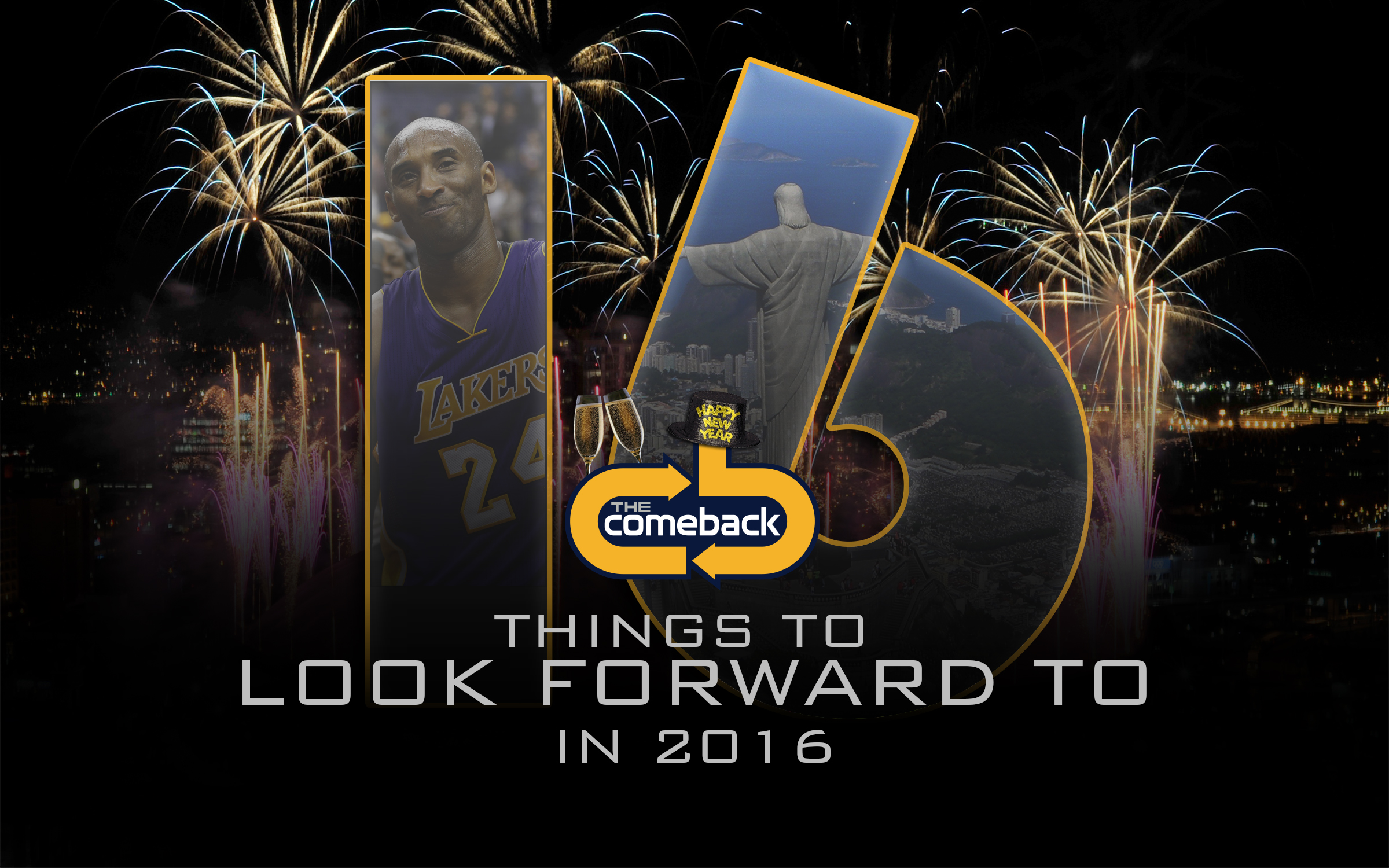 At The Comeback, we love sports and pop culture all year ’round, including December, and we spent much of the last week of 2015 sharing with you some of our bests.

Now it’s time to look ahead, not back, at 16 things we are most excited about heading into 2016.

If you’ve stepped outside your home over the last week you’ve no doubt been ran over by some millennial brat treating the sidewalk like the Audubon. The terrifying part
it’s only going to get worse.

Otherwise known as the Worst Day of the Year for those who have a friend with a leap day birthday.

He wants to populate Mars and turn self-driving cars into a thing. Also, there’s that whole Hyperloop contraption which seems like something that actually was on the Starship Enterprise.

The Sports Guy is now at HBO, where he’ll be permitted to do and say whatever he wants. That’s a good thing for sports fans and consumers of ESPN.

It’s OK to embrace your inner Neil deGrasse Tyson every now and again. So what’s on tap for 2016? How about the spacecraft Juno, which was sent into space five years ago, reaching Jupiter — and on July 4 no less. Take that, Russia.

10. Music worth paying for

Lots of artists/bands are going on tour this year. But the headliner no doubt will be Adele, who’s likely about to have like 43 Grammy wins added to her résumé. But enough about the Queen of the Greetings —Will Smith and DJ Jazzy Jeff are planning a world tour in the Summer of 2016!

You know what that means.

9. A year hearing how this is finally “the year” for the Cubs

Fans on the North Side will no doubt hate this (is there any way the Cubs aren’t featured on the cover of Sports Illustrated’s baseball preview?), but you can’t blame the media or baseball fans for thinking that 2016 is going to put an end to the Billy Goat curse. Not only did the Cubs win 97 games last year, and make the playoffs for the first time 2008, and defeat the rival Cardinals to earn their first postseason series victory since 2003, but they accomplished all that despite being a team built round a bunch of raw kids. Rizzo and Bryant and Schwarber and Arrieta and Lester are all back, and now Jason Heyward, Ben Zobrist, John Lackey and Trevor Cahill have been added to the mix. It seems like it’s just a matter of time before Theo Epstein repeats the magic he pulled off in Boston.

8. The debate over Peyton Manning’s legacy

At this point it’s too early to tell what’s true, what’s not and where this is going. Here’s what we do know, though a reputable (sorry, Ditka) news outlet has published a report stating that a 39-year-old professional athlete coming off multiple surgeries had a product that helps athletes heal shipped to his house. If you think there’s no chance Manning took anything illegal you’re being naïve.

That said, we’d probably all be better off if “should we actually care if athletes take HGH” was the topic we spent time debating.

7. The possible return of a certain important Game of Thrones character

Don’t worry, no spoilers here. Just know that the premier for season six of Game of Thrones might be the most anticipated season premier of a show since…Sopranos season 7? Mash? Making the upcoming season of Game of Thrones even more exciting: the show has now caught up to the books. No longer will you have to deal with trolls dropping spoilers on social media. Everyone is in this together now. And there’s so much to look forward to.

The NFL has, for some reason (#branding) decided to drop the letters and label the 50th Super Bowl in league history “Super Bowl 50.” This of course means that this year will always be remembered as the year where fans everywhere actually knew what number Super Bowl we were up to.

If you like your superheroes this will be the year for you. And even if you’re not a fan of Hollywood’s infatuation with the comic book universe, you still might enjoy what’s on tap for the coming year. There’s Batman v. Superman, which, admittedly, looks kind of off in the trailer (“tell me, do you bleed?”), but it should still be cool seeing the Caped Crusader and the Man of Steel duke it out on the big screen. And anyway, if that film does nothing more than serve as a lead in to Suicide Squad, well, it will pay for itself.

Marvel’s coming in strong, too. There’s Captain America: Civil War; X-Men Apocalypse, which will feature the surging Oscar Isaac playing a super villain; and Deadpool, which seems as if it will essentially be Ryan Reynolds playing Van Wilder as a superhero. Plus Magic Mike as Gambit and Sherlock Holmes as Dr. Strange. What’s not to like?

The best part about this year’s summer games being in Rio, at least for American viewers: no more watching tape delayed broadcast of events where we already know the result. Now that the Olympics have come back our time zone NBC will be able to show everything live. (Ed. Note: yeah, that’s not going to happen, but it’s fun to think it will.)

Most of the focus this summer will be on Michael Phelps. But there’s also the basketball tournament, which in recent years has been a blast, and there’s always a star that emerges as well, Katie Ledecky we look in your general direction.

And as if the spectacle that the games have become in recent years wasn’t infuriating enough to those of us who follow sports more than once every two years, there’s this: NBC has decided to sprinkle Ryan Seacrest into this year’s telecast.

In truth, the Olympics are a global event that, unlike say the Fifa World Cup, the United States usually has a chance to win. But more of what the Rio Games presents, and something to look forward to in 2016, is all the coverage of the event. The Brazil World Cup in 2014 was rife with scandal and controversy, and that was just for one sport, with a select few (great) countries visiting the country’s shores. Imagine now the entire world trying to navigate the airports of Brazil, the roads of Rio. Imagine all the corruption and back-room deals it must take to get any Olympics, but especially on in Rio, off the ground. If there’s one thing to look forward to the most in 2016, outside of the United States on the field, its how this Olympic Games will be covered in today’s media landscape.

3. The Warriors’ quest for 73 wins vs LeBron’s quest to make Cleveland fans feel better about living in Cleveland

Not to ignore the Spurs, but the NBA top storylines are in Cleveland and Golden State. For the Warriors, a team that has morphed into The Greatest Show on Earth, the question is can they surpass the ’96 Bulls and become the first team in NBA history to win 73 regular season games. There’s also their journey towards a repeat title. It’s obviously too early to make any sweeping statement, but IF Steph Curry and Co. do win another championship they’ll throw themselves into conversation of the greatest NBA teams of all time.

Over in the East it’s all about LeBron and the Cavs. James returned to Cleveland last year so that he could be the one to deliver the city a title. The Warriors and Spurs are stacked, but the road through the East and to the Finals will never be easier for him and the Cavs. At some point all the miles on LeBron’s odometer will catch up to him. His window with the Cavs isn’t about to close, but it will also never be as open as it is now.

Whether you love him or hate him, there’s no debating that he’s one of the greatest, and most interesting players to step foot on a hardwood. Kobe’s final game — which will be on Wednesday, April 13 against the Jazz — will be must watch TV. So will the run to that point.

Thankfully, Kobe has discovered his touch a bit since that disastrous start. He’s no longer embarrassing himself on a nightly basis and sometimes even looks dangerous on the court. Also, anyone who can get His Airness to come out of narcissistic shell and actually pay tribute to someone not named Michael Jordan is a person worth celebrating.

On Nov. 9 we will know whether the next president of the United States will be. Given the state of the current field, that might not be something “to look forward to” but so it goes.