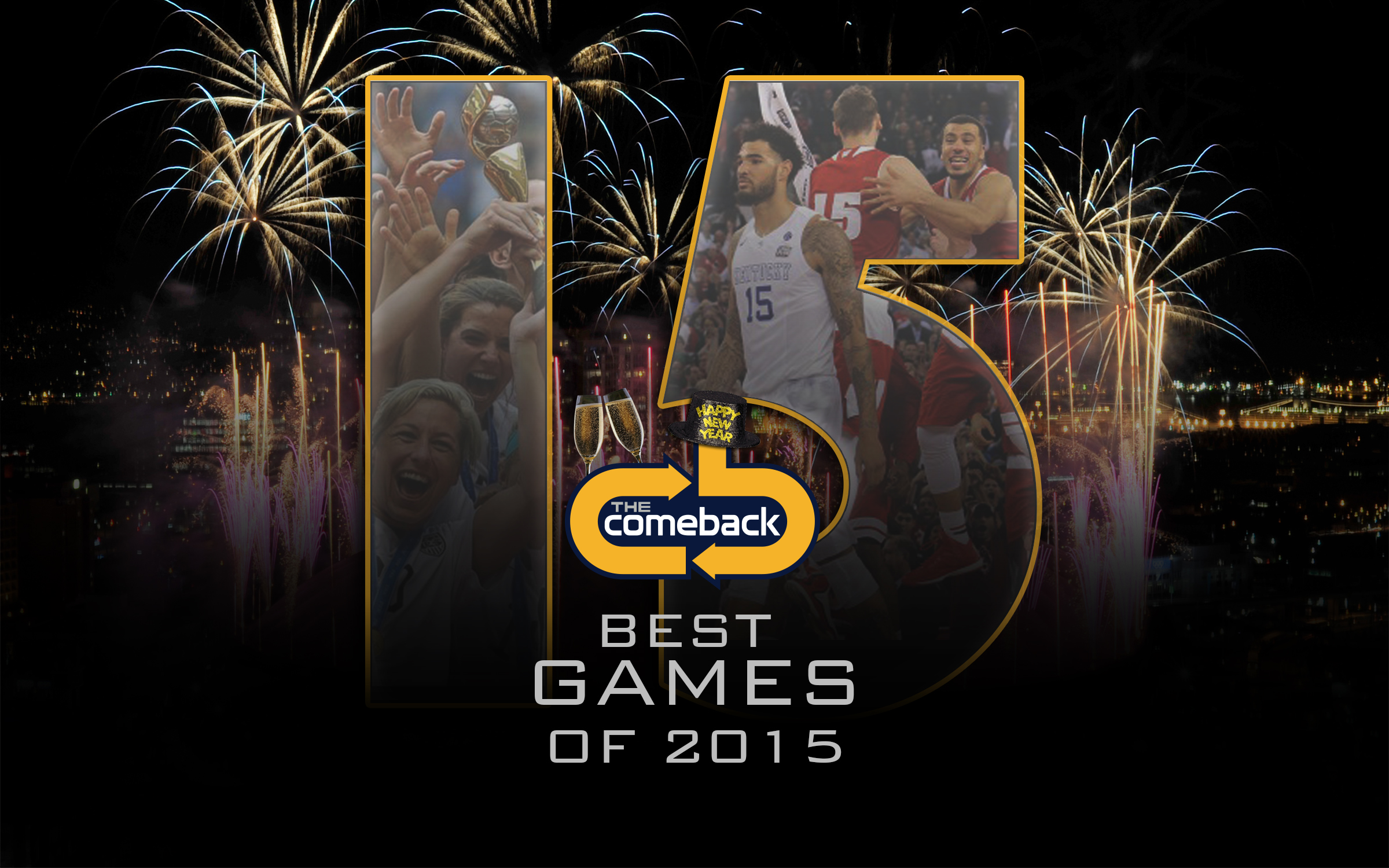 Up next, the 15 Best Games of 2015! From last-second victories to undefeated streaks coming to an end to overtime thrillers to World Cup blowouts, here are some of the best games of the last 12 months. 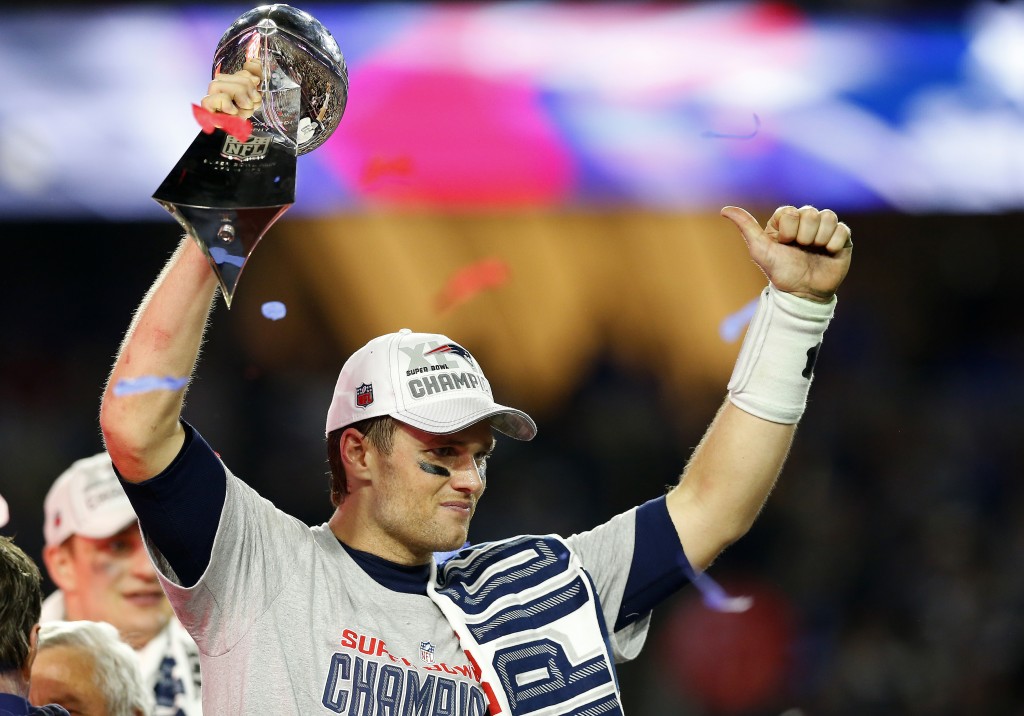 In what may be the craziest game of the year, the Giants and Saints collided in a shootout of epic proportions.  Eli Manning threw for 350 yards and 6 TDs and was somehow topped by Drew Brees, who threw for 505 yards and an NFL record-tying 7 TDs.  If the passing numbers weren’t enough, the ending was just as wild – a facemask penalty on Giants punter Brad Wing set up Kai Forbath for a 50 yard FG as time expired for the 52-49 victory.

Any list of great games is bound by American AND Canadian law to include a multiple-overtime game from the Stanley Cup Playoffs. Does it get any better when it comes to drama and excitement than overtime hockey? You can probably populate a lot of recent year-end lists with these kinds of games won by the Blackhawks. This year it was a triple OT win over the Ducks that helped propel them to their third Stanley Cup in five years.

Is a horse an athlete? Well… we can’t solve that debate today (or maybe ever), but we can definitively say this was one of the definitive events of 2015. American Pharoah was able to accomplish a feat no other horse had done for almost four decades – win the Triple Crown at the Belmont Stakes. At the top of the stretch, where so many hopefuls had faded, American Pharoah got stronger and those few seconds where the horse rode into the history books were truly magical.

The 2015 Sugar Bowl may be the one game that shifted the power dynamics in college football the most since… well… Ohio State’s shellacking at the hands of Florida started the SEC’s run of dominance.  The upstart Buckeyes led by Cardale Jones shocked top seed Alabama in the first ever College Football Playoff, winning 42-35.  OSU came back from a 21-6 first half deficit thanks to several highlight plays, capped by Ezekiel Elliott racing 85 yards through the heart of the south.

Before her semifinal matchup with top seed Serena Williams, Roberta Vinci was a 30-1 underdog.  Those odds may have been kind to the Italian, who was playing in her first grand slam semifinal and became the oldest debutant at that stage in the open era.  On the other side, Serena Williams was only looking to complete the calendar grand slam.  Vinci shocked the sports world in a 2-6, 6-4, 6-4 victory, one of the greatest upsets in the history of the sport.  Given Serena’s year of total dominance, it’s just a little ironic her mention on this list came in a loss.

Another run at history cruelly cut short.  Kentucky was looking to become the first team since the 1976 Indiana Hoosiers to complete a perfect season with winning it all.  And they came oh so close to doing so until going down to Frank Kaminsky, Sam Dekker and the Wisconsin Badgers in the Final Four.  The Badgers and Wildcats traded runs down the stretch until a Dekker three in the closing stages put Wisky up for good.

From a pure basketball perspective, this is one of the best games the NBA has seen in a long, long time.  It’s just a shame that the classic Clippers-Spurs series came so early in the postseason.  This was the ultimate example of a game and a series that nobody deserved to lose.  After a Game 7 that saw 16 ties and 31 lead changes, a hobbled Chris Paul hit the game winner over Tim Duncan with 1 second left for a 111-109 win.  The Clips’ victory nearly overshadowed the start of the Pacquaio-Mayweather fight that night, which had more buzz, but was nowhere near as good a contest. The Clippers would later exit the postseason largely thanks to another wild game that just missed our countdown.

The Royals’ historic championship would have never happened had it not been for a tremendous comeback in the first round of the postseason.  Facing elimination in Houston, KC was down 6-2 entering the Top of the 8th inning.  A furious rally and a five run inning turned the game, the series, and the Royals’ title hopes upside down.  And incredibly, they did it all on five singles, a fielder’s choice, an error, and an RBI groundout.

In most years, this would be the top NFL game on our list (so enjoy this while you can Seahawks fans).  Kicking off a year of remarkable comebacks in championship games, the Seahawks turned around a 16-0 halftime deficit to topple the Packers in an instant classic.  After an insane fourth quarter that featured a 12 point comeback, an onside kick, a cross-field miracle two-point conversion, and a game-tying field goal from Green Bay… Russell Wilson threw the game-winning TD to Jermaine Kearse in OT to send Seattle back to the Super Bowl.

The 2015 US Open was memorable for a lot of reasons.  Many of them good… many of them, well, not so good.  While the Chambers Bay track and Fox’s debut coverage of major championship golf left a lot to be desired by golf fans, the drama overcame the surroundings.  The final round started with a four-way tie for the lead and ended with an enthralling, nerve-wracking climax that only golf could produce.  Louis Oosthuizen birdied 6 of his final 7 holes to finish at -4.  Fresh off winning the Green Jacket, Jordan Spieth finished birdie-double bogey-birdie to best him at -5 in the clubhouse.  Stepping onto the 18th tee, Dustin Johnson also stood at -4, needing an eagle to win his elusive first major title and a birdie to force a playoff.  Johnson reached the Par 5 in two and had a 15 footer for the win.  Tragically, not only did he miss the eagle putt, he missed the short birdie putt for the tie as well – one of the most infamous three-putts in golf history.

We turn to international sport where one of the biggest upsets on record happened in the early stages of the Rugby World Cup.  Prior to their game against the Springboks, Japan had only won one game at the tournament – in 1991 against Zimbabwe.  Just four years earlier, they had lost to New Zealand by an 83-7 scoreline.  South Africa were a 5-1 shot to win the tournament while Japan were 2000-1 outsiders.  On the day, the Cherry Blossoms were the equivalent of a 44 point underdog.  Yet somehow, they won 34-32 in a great reminder of what is possible in sports, with Karne Hesketh diving over in the corner for the famous victory after the final horn had sounded.

The final four years earlier between the same two teams may have had more drama in being decided by penalty kicks, but the 2015 USA-Japan Women’s World Cup Final will be equally as memorable for the incredible culmination for a US Soccer team with all the pressure in the world on its collective shoulders.  The USA avenged their 2011 defeat with a breathtaking 5-2 victory highlighted by Carli Lloyd’s hat trick.  That hat trick included one of the moments of the year – an astonishing strike from halfway that’s one of the great goals of all-time.

Years from now, they will be writing books, and then make movies from said books, about the 7th inning in Game 5 of the Blue Jays-Rangers series.  Lead changes, errors, reviews, controversy, benches clearing, and one bat flip heard round the world.  Baseball has been played for 150 years and the game may have never seen an inning quite like it.  The Jays would win the inning 4-1 and the game 6-3 to advance to the ALCS.

We had to cheat just a little bit by including both of these classics in our countdown.  The Warriors-Cavs finals began with a bang as the teams split the first two games of the series with both going into overtime.  Golden State held on for a 108-100 victory in Game 1.  In Game 2, now down Kevin Love and Kyrie Irving, a LeBron James triple double led Cleveland to tie the series at a game a piece after a 95-93 triumph.  James averaged 41.5/12/8.5 in the two games putting the entire team on his back, but it wasn’t enough to win the series as the Warriors ultimately won the series in 6 games.

Could there be any other choice?  Even before the final sequence which will be debated and replayed and debated again until the earth is swallowed up by the sun, this was one to remember.  The Patriots had overcome a 10 point fourth quarter deficit to take a 4 point lead.  Jermaine Kearse made a circus catch that resembled David Tyree.  But then, Malcolm Butler etched his name into Super Bowl lore by intercepting Russell Wilson at the goalline with just 23 ticks left on the clock and preserving a 28-24 victory.  It was the best game of 2015, but the Patriots’ championship did lead us to months and months of mind-numbing DeflateGate drama… so you take the good with the bad.