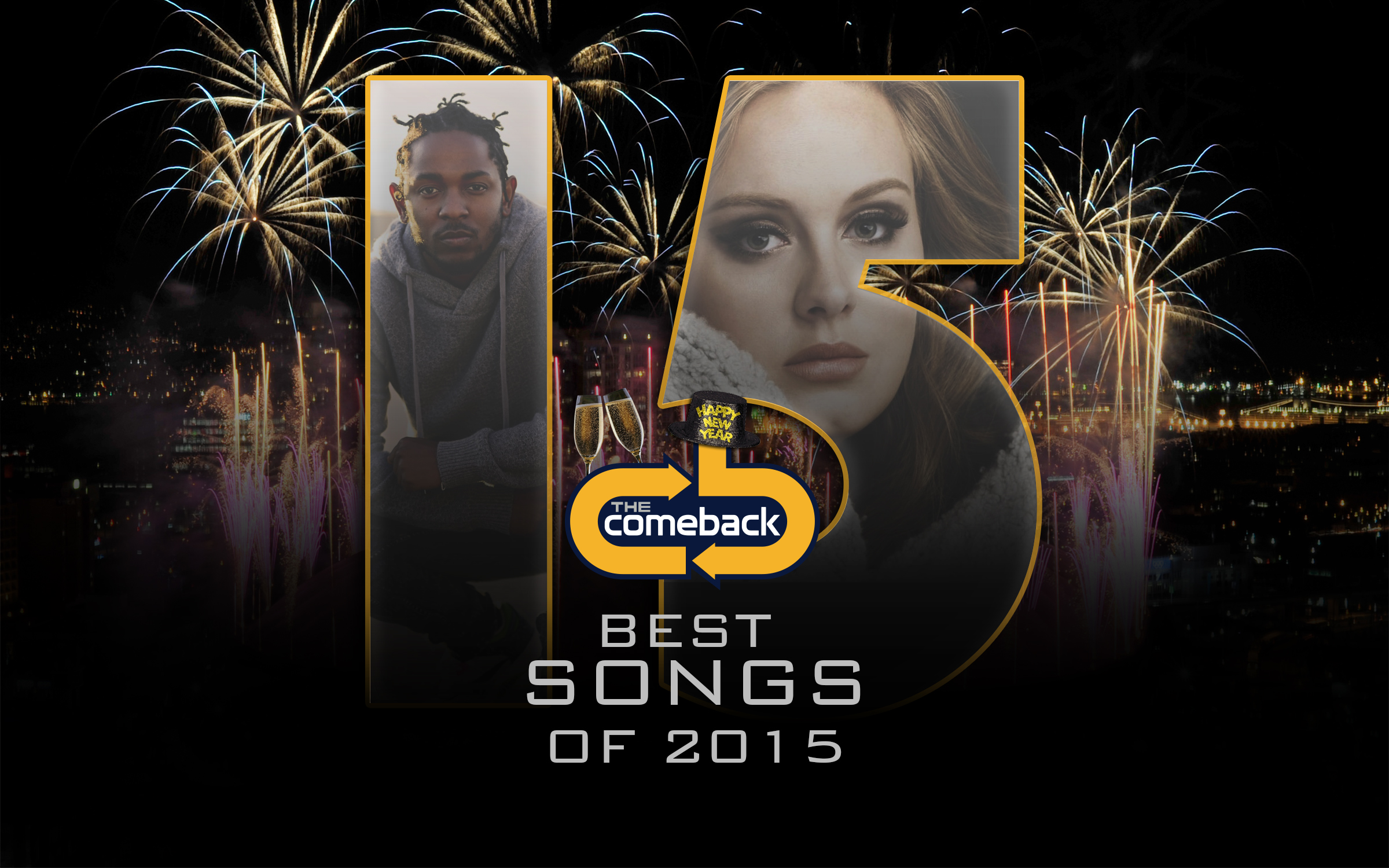 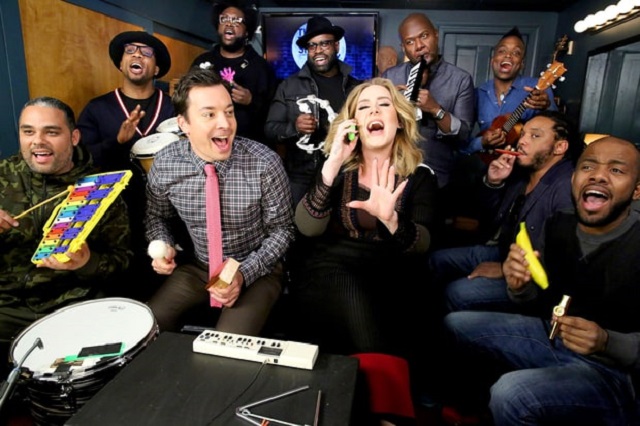 There was no shortage of notable singles in 2015, and as much as movies, television or any pop culture lists we do, some of this will be incredibly subjective. Here is our attempt at the best 15 songs of the year.

Radiohead confirmed rumors that they were originally tabbed to write the theme for the latest James Bond film when they released “Spectre” on Christmas Eve. The producers went with Sam Smith’s “Writing’s On The Wall” instead.

Following a bus accident two years ago that hospitalized all four members of the band, Baroness announced their return (with a new drummer and bassist) with this massive tune that culminates in a rousing group sing-a-long.

Chance the Rapper was the first independent artist to appear on Saturday Night Live a few weeks ago, and one of the songs he performed was this ode to his grandmother.

Critics of Best Coast tend to denounce the band for repeating themes (e.g. California and relationships). While on the surface this song focuses on both of those it might be one of the most mature songs in their catalog.

A hip-hop/R&B Broadway musical about founding father Alexander Hamilton probably shouldn’t work, but the lyrics by Lin-Manuel Miranda (In The Heights) intertwine history, Rodgers & Hammerstein, and New York hip-hop to create something magical.

After spending years as a critical darling of the Americana scene Jason Isbell finally broke through to the mainstream with this song, his first single off of Something More Than Free. Isbell is at his best when he writes about the real struggles of life, and “24 Frames” further raises his status as one of the country’s best songwriters.

The Weeknd (Abel Tesfaye) had a small but loyal following before 2015, but the release of Beauty Behind the Madness elevated the Canadian to pop superstardom with number one songs like “The Hills” and “Can’t Feel My Face.” The latter of which is a hip-shaking tune full of swagger, and not so hidden allusions to drug use, it’s a song Bizzaro Michael Jackson could have recorded.

It’s a shame that Kurt Vile hasn’t received more of audience outside of the indie rock circles that praise him because he really is a great songwriter. It could be the weird, slacker persona that radiates from Vile that turns off mainstream listeners, but songs like “Pretty Pimpin’” just add to a seemingly endless catalog of amazing songs that will hopefully be recognized for their greatness soon.

Technically, D’Angelo “pulled a Beyonce,” and released his latest album, Black Messiah, unannounced in 2014, but it was released in mid-December, so we’ll give him a pass and include “The Charade” on this list for 2015. Co-produced with Questlove, this protest anthem help guide D’Angelo back into the mainstream consciousness after a 14 year absence.

The end of the year global takeover by Adele started with this ballad that the singer has described as a song for everyone she loves, and not about anyone in particular as depicted in the Xavier Dolan directed video. “Hello” is the first song to sell over a million digital copies in one week, and helped propel 25 to sales of over 3 million physical copies during its first week in stores, the highest single-week sales since Soundscan began tracking sales in 1991.

To those who didn’t hear “Avant Gardener” in 2013, Australian Courtney Barnett was somewhat of a surprise this year with her stellar debut album, Sometimes I Sit and Think, and Sometimes I Just Sit, appearing on The Tonight Show, Conan, Ellen, and even receiving a Grammy nomination for Best New Artist.

While many critics like to compare the left-handed guitarist to Kurt Cobain, which may be due to the album’s rocking debut single “Pedestrian at Best,” she is probably more comparable (especially lyrically) to another indie band from the 1990’s, Pavement. “Depreston,” a quiet, somber song about house hunting in suburban Melbourne reminds the listener more of Pavement songs like “Range Life” and “Fin” than anything put out by Nirvana.

The extremely personal I Love You, Honeybear is the second album for Josh Tillman under the moniker, Father John Misty. Channeling Harry Nilsson, Tillman wrote and recorded an entire detailing all of his own foibles, along with his relationship and eventual marriage to his wife, Emma.

Choosing just one song from I Love You, Honeybear is tough, but “I Went to the Store One Day” is a beautiful ending to an absolutely brutal album. The song recalls his courtship, potential future, and the first day he met his future wife in a Laurel Canyon store, and ends with the line “I’ve seen you around, what’s your name?” which were the first words Tillman ever said to Emma.

Everything surrounding the third album from Florence + The Machine, How Big How Blue How Beautiful, could be viewed as a therapy session for the band’s leader, Florence Welch. Spiraling out of control, Welch refocused the energy she spent on partying into a reflective album that included some of the band’s best songs.

Sonically “Ship to Wreck” is one of the danciest pop songs of the year, but lyrically it details the self-destructive tendencies of Welch. Upon the release of the song she told the BBC, “When you’re in that whirlwind, you often end up breaking the thing you love the most.”

Drake released two number one albums, If You’re Reading This It’s Too Late and What A Time to Be Alive (a mixtape with Future), in 2015, and neither of them featured his biggest song of the year, “Hotline Bling.” Released in July, a lot was written about the minimalist video for “Hotline Bling” due to the unusual dance moves of Drake.

The video led to memes, parodies, and even a Saturday Night Live sketch featuring Donald Trump, but those who critiqued Drake for his dancing missed out on one of the catchiest songs of the year. With a simple beat sampled from Timmy Thomas’ “Why Can’t We Get Together,” and lyrics depicting either a heartbroken or self-centered Drake, the song quickly climbed the charts becoming Drake’s first top 10 song in two years.

Outside of the commercial success of Adele, the biggest music story of 2015 is Kendrick Lamar’s third album, To Pimp A Butterfly. Relevant in a time of racial and social protest the album is Lamar’s most complete to date, and topped many year-end lists including The New York Times, Rolling Stone, and Pitchfork.

Earlier this month, Lamar received 11 Grammy nominations for To Pimp A Butterfly, the most ever for a rapper, and second only behind Michael Jackson’s Thriller all-time. “Alright” received four of those nominations including Song of the Year and Best Rap Song.

The song and subsequent video received almost universal acclaim with Lamar describing the lyrics as ones of hope, “The message, the overall message is, ‘We gon’ be alright.’ It’s not a message of ‘I want to kill people.’” This message has made “Alright” one of the anthems of the Black Lives Matter movement, and the most important song of the year.