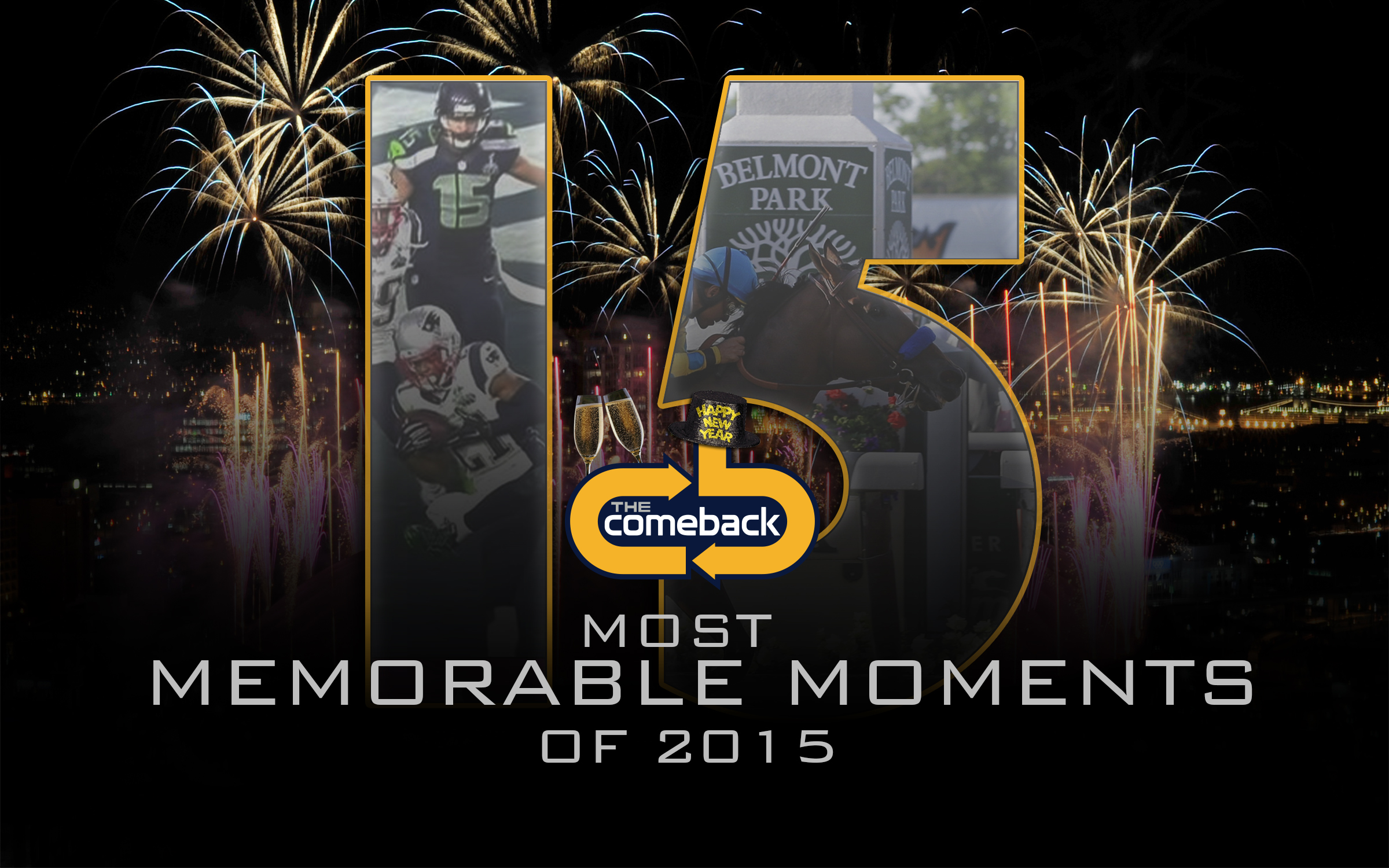 Next up, the most memorable moments of 2015.

We’ve done list for the best games and biggest storylines, so yes, there is some crossover here, but those storylines—at least those on the field—and certainly the games wouldn’t be as memorable in 2015 without that signature moment. The list of memorable moments is so long this year that these didn’t make the cut: The DeMar DeRozan dunk on Rudy Gobert, Mike Trout robbing a home run from the Mariners, LJ Scott reach across the goal line in Big Ten Championship Game, Conor McGregor knocking out Jose Aldo in 13 seconds (above) and Seth Rollins cashing in at Wrestlemania. But from Super Bowl-securing picks to face-rattling kicks, here are some of the biggest and most memorable moments of 2105.

Unreal. Lewandowski made Wolfsburg look like a youth side. Oh, and the fifth goal was an absolute wonderstrike.

14. Maya Moore buzzer beater in Game 3 of the WNBA Finals

The Dunk Contest had been on its deathbed for a while, but Zach LaVine brought it back to life with an electrifying performance.

The NCAA Tournament always gives us at least one moment to remember it by. This year, it happened early on the first day. Straight cash, homie.

We’d been waiting years for Mayweather and Pacquio to meet in the ring, and as a sporting spectacle, it lived up to the hype. (Even if the boxing itself was rather forgettable.)

Okay, so maybe it’s cheating to lump all of these together, but there’s only 15 spots on this list, and one wasn’t so much better that it deserved its own spot, so here we are. From Chris Paul finally elevating the Clippers over the Spurs, to Paul Pierce calling game, to LeBron reminding everyone why he’s The King, last year’s playoffs featured some truly incredible moments.

Michigan vs. Michigan State is always a big game, and even more so when the two are both ranked in the top 12. But most meetings don’t end the way this year’s version did. Actually, no previous meetings ended like this year’s, because this year’s ending was one of the most preposterous endings to a college football game we’ve ever seen.

Type “Dez” into the YouTube search bar and do you know what immediately pops up? “Dez Bryant catch vs. Packers.” That’s right, “catch.” Because it was a catch, and that should have been a touchdown. It’s been almost a year since that play, and people still bring it up all the time, because one, it was absurd, and two, everyone is still yet to figure out what exactly counts as a catch.

There is a 100 percent chance we get a 30 for 30 called “One Inning in Toronto” sometime in the next decade, and Jose Bautista’s home run and bat flip will be the defining moment. In fact, even though the Blue Jays lost the next series to the Royals, Bautista’s bomb and flip over the Texas Rangers was the defining moment of this year’s MLB Playoffs.

Jordan Speith has been on the minds of golf fans for a few years, but this summer he put his name on the front page and established himself as a dominant force on the PGA Tour. First he won the Masters, then he came through and became the youngest U.S. Open Champion since Bobby Jones in 1923. But the moment of the PGA season came from someone else’s stick, when Dustin Johnson could not sink a putt on the 18th green at Chambers Bay, giving Spieth his second major of the year in the most dramatic and gut-punching moment in golf in 2015.

This summer, Serena Williams put together one of the most remarkable tennis displays of all time. By their mid-30s, most women’s tennis stars are fading, but Williams submitted the best season of her career, winning the Australian Open, the French Open, and Wimbledon. Then she cruised into the Final of the U.S. Open, and only unheralded Roberta Vinci stood between her and a Grand Slam.

After claiming the first set 6-2, Serena seemed to have it in the bag. But then…Roberta Vinci decided not so fast. Yet even after the Italian took the second set 6-4, no one had real doubts about Serena losing. How could she? Or rather, how could this Itlian woman no one had heard of keep winning points off the greatest tennis player of this generation? It wasn’t until Vinci won an exceptional rally mid-way through the third set, gesturing wildly to the crowd afterwards, that the upset become a legitamate possibility.

A few games later, Vinci took match point on a brilliant half-volley that looped just up and over the net. Serena had been defeated. And not by Maria Sharapova or Caroline Wozniacki or Simona Halep, but by Roberta Vinci, who then went on to give a post-match interview perhaps even greater than her on-court performance.

4. American Pharoah winning the Triple Crown at the Belmont

Even though American Pharoah lost out on Sportsperson of the Year because, well, he’s a horse, he still gave us a most historic and memorable moment this summer. After coming from behind on the final turn at the Kentucky Derby, to winning the Preakness Stakes in the pouring rain, American Pharoah came to the Belmont Stakes with a chance to claim the first Triple Crown since Secretariat in 1973.

Most years the Belmont is the least important of the Triple Crown races, the one everyone forgets is actually happening until the winner is announced. Once in a while, however it becomes the most important horse race of the year. American Pharoah made that happen this year, as he singlehoofedly turned Belmont Park in Elmont, New York into the most happening place in sports.

Then, he won it all. And it wasn’t even close.

15 minutes into the Women’s World Cup Final this summer, the U.S.A was already up 3-0 on Japan. And yet, the most incredible moment was still to come. With two goals already to her name, Carli Lloyd decided she wasn’t done getting revenge on Japan.

So with the Japanese keeper off her line, Lloyd went for the jugular. Blasting one from midfield, Lloyd sent the ball just over the goalie’s outstretched hand and tumbling into the net. A hat trick for Lloyd in less than 16 minutes. A World Cup victory for the U.S.A.

U.S. Soccer winning the match wasn’t shocking, but the manner in which they went about their business most definitely was. And so too was this golazo from Lloyd, who put herself in the history books with the hat trick, and on highlight reels forever with the midfield strike.

Ronda Rousey is one of the rare athletes who has been able to transcend sports and become a cultural icon. There’s no qualifier of, “that’s Ronda Rousey, the fighter.” It’s just “that’s Ronda Rousey. It’s like LeBron James or Tom Brady; no one has to add in their job title after their name. It’s just assumed you know it, and even if you don’t, it doesn’t really matter anyway, because they’re bigger than sports.

It didn’t even seem possible that she could lose. Holly Holm? Please, Rousey knocked out her last opponent in like 40 seconds. There’s no way she’s losing. Sure, 99 percent of the people following the fight had no idea who Holm was, but it that’s the thing. It didn’t matter who Rousey was fighting. She was the undefeated champ. She was a dominant force unlike women’s fighting had ever seen. It was too easy for her.

Holm had been causing problems for Rousey with her punching, but it was a devastating kick that shocked the world. Looking back, there’s some people will tell you it wasn’t really that much of an upset, but at the time, it was unfathomable.

The Super Bowl is always one of the biggest sporting events in the world, and certainly the most important in America. Between the parties, the gambling, and the hundred million plus people that tune in to watch the game, it’s almost as if America grinds to a halt for five hours on Super Bowl Sunday.

And even before one of the most memorable moments in the history of sports, the game was already a classic. Down 10 points in the fourth quarter, Tom Brady had lead an impressive comeback to give the Patriots a 28-24 lead with just over two minutes left.

But after Jermaine Kearse made a bizarre and unbelievable catch that surely would have had a spot on this list if not for what would happen later, the Seahawks had the ball inside the Patriots’ five yard line with still a minute to go.

Even to this day people will tell you how the Seahawks made the wrong decision in the following moments, but that does little to diminish the impressivness of Malcolm Butler’s feat. The undrafted rookie cornerback from tiny little West Alabama soon became a household name as he did his job, intercepting Russell Wilson at the goal line to stun the Seahawks, his fellow Patriots, and everyone watching across the globe.