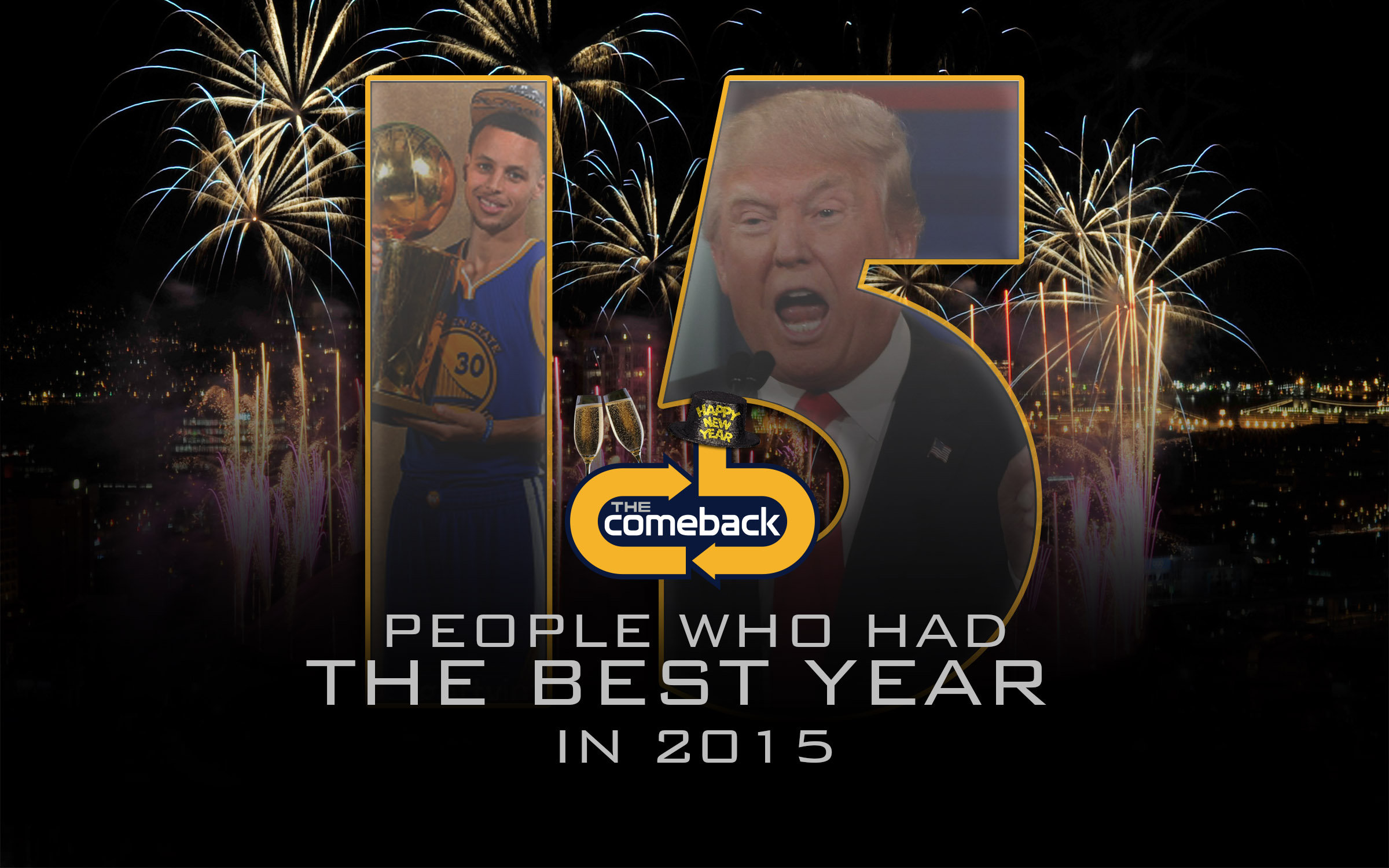 Next on our list of lists is the list of people who had the best year of anyone on the planet in 2015. (Note: this is not a complete list.)

The human population of planet Earth is currently hovering somewhere around 7.4 million. So it can be hard to single out fifteen of us when trying to figure out which ones had the very best year out of everyone, let alone determine what factors say one person had it better than another. To be honest, we’re a sports and pop culture site, so we’re not going to claim to be up to speed on matters of world politics and global impact. As such we’ve decided to zero our focus in on people who have had an impact on the American viewpoint in 2015. It’s a bit of an eyeball test based on what these people did over the course of the year and the legacy they leave behind. You may not agree with all of them but you cannot deny the impact these people have had on at least some of the other 7,399,999,985 humans out around them.

J.J. gets in right under the wire for not only making us all fall in love with Star Wars again but also making a crap-ton of money while doing it.

Pratt only appeared in one blockbuster this year but what a blockbuster it was. Jurassic World earned over $1.6 billion in box office revenue and cemented his recent status as one of the most bankable stars out there right now.

The endless wait for Mayweather vs. Pacquiao finally ended in May when Mayweather won via unanimous decision. The fight was a windfall for the undefeated Mayweather, who made between $220 million and $230 million for one night’s work. Sure there was controversy afterward but Mayweather backed it up by winning another bout, against Andre Berto, and announcing his retirement, unbeaten and as boastful as ever.

Swift’s 1989 album debuted in 2014 but it really hit it’s stride in 2015, eventually selling over 9 million copies worldwide. Along the way she received the ACM Milestone Award, invited just about celebrity on her world tour and appeared on every magazine cover you can think of.

A respected author in his own right before 2015, Coates skyrocketed into a new literary stratosphere with the release of his 2nd book, Between The World And Me, which won the 2015 National Book Award for nonfiction, and helped earn him a fellowship with the prestigious American Library in Paris. His writing spawned a million arguments from cable news to podcasts to your local coffee shop.

The rap group as we know it was finished back in 1991 but the stars aligned to demonstrate just how powerful the legacy left behind by Dr. Dre, Ice Cube and Eazy-E truly is. First, their biopic, Straight Outta Compton, opened to stellar reviews and earned over $200 million worldwide. An accompanying soundtrack to the film debuted at No. 2 on the US Billboard 200 charts. To top it all off, the group was voted into the Rock & Roll Hall of Fame this December.

Curry not only led the Golden State Warriors to the NBA title, defeating LeBron James and the Cleveland Cavaliers in the finals, but he also ascended to the rarified air of A-list, bankable NBA players and American athletes. His face is everywhere now (and so is his daughter’s). Plus, he picked up right where he left off and has the Warriors on pace to repeat as champs.

Say what you want about her politics and her scandals but Clinton had one job in 2015, to remain the frontrunner for the Democratic nomination for the President of the United States. By all accounts she succeeded in that goal and 2016 is either going to be the best or worst year of her career.

The four-time winner of FIFA’s Ballon d’Or is the odds-on favorite to win it again after yet another stellar season in a career full of them. He led Barcelona to a La Liga, Champions League and Copa del Rey treble and scored 28 goals in the second half of the campaign alone. They also just won the Club World Cup thanks to a quick goal by Messi in the final. Sure, he was hurt for much of 2015, and yes, he did just have a bout of kidney stones, but this year was as good as it gets on the field. In play for Argentina, he earned his hundredth cap during the 2015 Copa América, becoming only the fifth Argentine to reach that milestone, leading his country to the final.

In a year when many billionaires across the world saw their pockets get fatter, only Amazon’s CEO Jeff Bezos ranked among those who made the most money in 2015 and have the most money in 2015. The fourth-richest person on Earth watched his empire grow, figuratively (Amazon’s got an arm in so many industries it’s hard to keep track) and literally (Amazon is basically re-making Downtown Seattle in it’s image). Whether you’re buying a book, listening to music, watching a movie, buying groceries, reading news or flying a drone, Bezos probably has a stake in it.

Coming into 2015, most Americans probably didn’t know who Bernie Sanders was. By April, they got to know the Vermont senator who wanted to be President. For a brief while there in the fall, it seemed like he might have a shot. As 2015 ends, the chances that he’ll actually become President seem slim to none but he’s reinvigorated a part of the populace and forced conversations about class and wealth to the forefront of the debate. Some would say he doesn’t seem Presidential but there are enough people out there who love him. There’s a reason won Time’s 2015 Person of the Year readers’ poll with 10.2% of the vote.

Here’s how good Adele is. She was relatively MIA for most of the year, having been three years removed from her last album. Concerns about whether or not the follow-up would be good and if we’d even get to hear it in 2015 were loud. She silenced all of them with the release of 25 in November. Not only the fast-selling album in UK history with 800K sold in its first week, it also broke U.S. records with 3.8 million copies sold in one week, the largest number since they started keeping track in 1991. It broke opening week records around the world as well.

She followed that up by announcing her 2016 American Tour and putting roughly 750,000 tickets on sale. According to Vulture, 10 million people attempted to buy them. Ticketmaster claims that 2 million people tried to buy the 120,000 tickets just for Adele’s New York show. In an industry running out of big deals, she’s a big deal.

Oliver’s career kicked into high-gear when he left The Daily Show to take over his own show, HBO’s Last Week Tonight, in 2014. It was a runaway smash but 2015 was the year Oliver confirmed he was here to stay as one of the country’s premiere commentators.

When he wasn’t doing insightfully-funny interviews with Edward Snowden or hard-hitting opinion pieces on the American criminal justice system, he was creating a new religion. All in the name of highlighting the issues that were truly important and shining a light on the dirty not-so-secret secrets that help keep certain people in charge and many others in trouble. He may be cracking jokes most of the time, but Oliver is one of the few late night commentators actually making a difference in the world.

Amy Schumer so thoroughly dominated 2015 we’re already at the point where we can’t remember what was happening in comedy before she got here. While the show Inside Amy Schumer was already doing well for Comedy Central, this latest season truly broke out to the masses. That was coupled with her hosting of the 2015 MTV Movie Awards as well as her first leading film role in Trainwreck. By then, she was ubiquitous enough to appear on whatever TV show or YouTube video you happened to be watching.

Schumer’s impact goes beyond fame, however, as her style of subversive feminism seemed to hit at exactly the right moment in our culture. Her takes on body image, race, sexism and other topics were analyzed, scrutinized and debated at-will. She also inadvertently became a voice in the gun control debate as well. Not big surprise she was one of Time magazine’s 100 most influential people of the year.

Okay, hear us out.

Yes, Donald Trump has said and done some truly awful things in 2015. His opinions on matters of race and immigration and women and the disabled are, at best, tone-deaf, and at worst, vile. Comparisons to Hitler in politics are nothing new but Trump has been one of the few recent American politicians to actually earn them.

But take a step back for a moment. Forget about the specifics. Forget about what he said. Then, take notice of the fact that a lifelong businessman with no political experience whatsoever is currently the favorite win the Republican nomination for President of the United States. That’s…impressive? Unthinkable? Amazing? Scary? All of those things?

When he began this year, Trump’s aspirations were an afterthought. A joke. No one’s laughing anymore, and in the end that’s the most shocking development to come out of 2015.