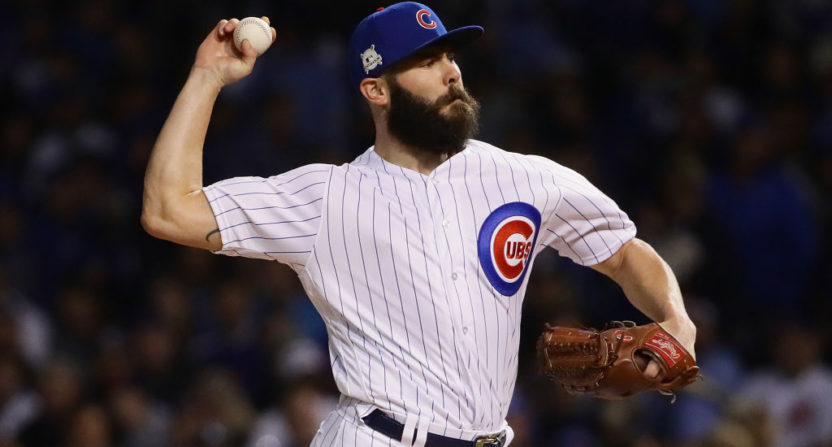 The MLB hot stove action should intensify after Thanksgiving, and will really kick into gear when the Winter Meetings arrive on Dec. 10. We’ve taken a look at the top free agents in this class, some potential great bargain buys, and now will examine some free agent contracts that teams should avoid handing out.

Let’s get to it, and happy hot stove season.

MLB Trade Rumors predicts Jay Bruce gets three years, $39 million, and that type of contract seems borderline insane (not saying they’re insane; this type of contract for Bruce has been floated by several outlets).

Bruce is a proven veteran slugger that hit 36 homers in 2017 and has hit at least 25 homers in seven of the last eight seasons. But hitting dingers is really all Bruce brings to the table, and everybody hits home runs now (juiced balls!). He hasn’t had an on-base percentage of at least .330 since 2011, and he’s just a career .712 OPS hitter vs lefties. Oh, and he’s a train wreck defensively, which certainly isn’t going to get better in his 30s.

So what you have is a lefty that hits a lot of home runs vs right-handed pitching, does really nothing else on offense, and will either hurt you defensively or be forced to DH. There’s a reason he was worth less than 1-WAR in three of the last four years. Paying this kind of player double-digit millions annually (and over three years potentially, it seems) is just such a stupid use of resources. You can get these guys every trade deadline without giving up top prospects. Like, when the Indians did this to acquire Bruce from the Mets in August!

Over the last three seasons, Carlos Gonzalez has a .278/.338/.493 slash line. Hey, that’s pretty damn good, right? Or, at least it seems that way until you see how much it was boosted by the arcade baseball ways of Coors Field.

On the road over the last three years, Gonzalez was a .708 OPS hitter (and .606 in 2017), compared to a .956 OPS hitter at Coors Field. And, like Jay Bruce, Gonzalez is bad vs left-handed pitching and a bad defensive outfielder at this stage of his career (he’s now 32).

CarGo did rebound to post a .921 OPS in the second half of 2017 after a brutal .637 OPS, 51 wRC+ showing in the first half, but there’s just too much risk here to feel good about anything but a one-year, prove-it deal at under $10 million.

Some team will probably fall in love with his overall stats over the last few years — “Maybe he’s just that much better at home regardless of park!” — and his second-half bounceback, and pay him $12 million+. Don’t be that team.

Greg Holland is a good relief pitcher and probably a top-20 free agent in this class. But he’s not as good what he’ll ultimately sign for with how much people are still in love with saves. There’s no doubt the ninth inning is a different animal, but it’s very possible there are more than a few relievers in this class that can do the same job or better if given the chance, and at a much cheaper price.

Holland also had a brutal second half in 2017, with a 6.38 ERA and 4.99 FIP. Even excluding Wade Davis, 11 of these free agent relievers had a higher fWAR than Holland did. You could sign two of the relievers for the same overall average annual value (AAV) as Holland without the four years of commitment (for a guy that missed all of 2016 with Tommy John Surgery and is a max effort pitcher who throws sliders 49% of the time).

If July comes along and you still feel you need a Greg Holland (a second to third-tier closer), they can be rented without giving up top-100 prospects.

Okay, so this one probably isn’t going to end up actually happening, and is classic Scott Boras (who is great at his job if we’re being honest). Odds are that Martinez signs closer to the seven-year, $161 million mark we suggested, rather than Boras’ $210 million asking price over seven years for Martinez. And if so, that deal isn’t too bad for one of the best hitters in baseball, especially if it’s an AL team signing him.

But let’s just imagine Martinez really does sign anywhere close to the $200 million+ mark, and, well, that would be a bit much.

Martinez, 30, is an even worse outfielder than Jay Bruce, and hasn’t played a game at first base in the majors. Maybe he can handle first base well enough given the elite bat, but no team can confidently plan on that. He should be a DH right now and especially as the contract gets into the later years.

The value is all the bat, so paying him $30 million a year into his late 30s to keep hitting would be incredibly risky, and is quite unlikely to have the production match the contract. Even in this amazing 2017 season (45 homers, 1.066 OPS), Martinez “only” had a 3.8 fWAR in 119 games because he brings negative value with the defense.

Don’t give more than 1 year

Logan Morrison was a fantastic story in the first half of 2017, putting up an out-of-nowhere .931 OPS and 143 wRC+ for the Rays. He was still a decent hitter in the second half (.786 OPS) and finished the season with 38 homers. But we’re also left wondering which hitter the 30-year-old really is, and at a position everyone mashes.

LoMo is definitely worth taking a chance on with a one-year deal (an AL team or a team like the Rockies makes a lot of sense), but committing to him as an everyday first baseman/DH for two seasons isn’t the best call, unless it’s a cheap deal. MLB Trade Rumors predicts three years, $36 million for him which would seem like a full-on gamble.

Anthony Swarzak, 32, may have been the most surprising reliever in baseball in 2017. His 2.2 fWAR ranked seventh among relievers, and he was a terrific trade deadline acquisition by the Brewers in a deal with the White Sox. His strikeout (10.59/9) and walk (2.56/9) rates were very good, and he showed off a solid fastball-slider combo.

However, it sure seemed he overachieved, and he’d never had a season anything like this. He did see a big velocity jump, so maybe he’s just a totally different pitcher now. But with so many other solid relievers on the market, it wouldn’t seem wise to hand Swarzak a multi-year deal with the uncertainty of what he really is.

But Vargas followed that up with a second half ERA of 6.38, the second-worst mark of pitchers with at least 70 innings over that time.

He still finished the season with a rock-solid 3.8 bWAR, and led the AL in wins (18), which will probably appeal to some organization far more than it should. You could do much worse for a back-of-the-rotation guy on a one-year deal, but with how desperate teams are for starting pitching, he may be overpriced and/or get multi-year offers.

Don’t give more than 2 years

Todd Frazier has put together six straight 2.5+ fWAR seasons with his ability to hit the ball out of the ballpark (averaged 33 homers over the last four years) and play a steady third base. The 32-year-old (in February) is currently a fine player, but if he starts to see a dip in power production or loses some of his reflexes on the hot corner, his value could take a big hit.

Short term, he’s a solid stopgap option, but committing to him as your everyday third baseman for more than two seasons would seem a bit desperate and boring. This is another type of player that can be found at the trade deadline every year without having to give up premium assets.

Don’t give more than 3 years

Lorenzo Cain has been one of baseball’s best centerfielders for years and has turned into a good all-around hitter. The concern here is that he turns 32 in April, so a deal longer than three years is taking him into his age-35 season. That’s scary when we’re talking about a player whose value is largely based on range and athleticism, and the metrics already feel his defense has been declining quite a bit over the last few years.

If he keeps being a .775+ OPS hitter, he doesn’t need to be an elite centerfielder throughout the deal to make it tolerable. But there is a lot of risk here and you’re basically just hoping to at least get 2-3 really good years out of him before the decline comes.

Jake Arrieta is expected to get a four or five-year deal with an AAV around $25 million. So, there’s a great chance his dollar amount will reach triple figures. Contracts in triple figures are scary when it comes to any pitcher (they all break!), but it would especially be a big gamble going forward when it comes to Arrieta.

But Arrieta has really had some issues with his command over the last two seasons (his complicated crossfire delivery is difficult to repeat, and sometimes his stuff just moves too much), something that was always a problem in his Orioles days. He’s been able to get away with it at times because of how good his stuff is, but it’s a concern going forward if the stuff starts to decline. And we saw this in the first half of 2017, when Arrieta had a sizable velocity drop.

The right-hander didn’t have a fastball velocity average (both with his four seamer and sinker) of at least 93 MPH in a single month until August, and the velocity of his cutter/slider was down as well. Just with the eye test, he looked much more hittable, and it didn’t seem all that fluky that his ERA in the first half was 4.35. In the second half, we saw the velocity get back up to 93+ regularly, and he had an outstanding 2.28 ERA.

Still, even when the velocity was higher in the second half, it was still down about two MPH from where it was in 2015. Arrieta keeps himself in insane shape, but he’ll be 32 when the 2018 season starts and — despite what Justin Verlander is showing us — usually velocity declines when we get into these years.

Arrieta is a full-on “stuff” pitcher. He needs the velocity and bite of his pitches. He needs the whiffs and weak contact. So, if the velocity continues to decline and his command issues remain, that’s very concerning over a long term deal. He probably has at least a couple very good seasons left, but betting on him to give production better than a No. 3 starter over the next four+ years would be ill-advised.