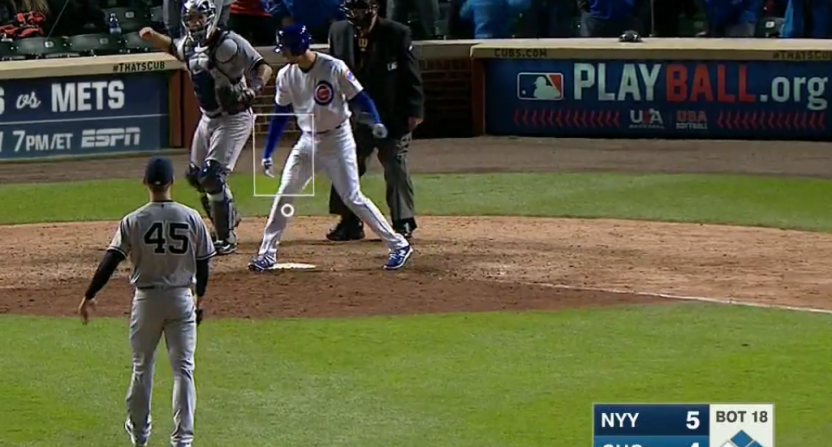 The Chicago Cubs and the New York Yankees made some history Sunday night. They produced an 18-inning, six-hour-and-five-minute game, the longest interleague game in MLB history and the longest Sunday Night Baseball game ever. Even more notably, the game had the most strikeouts in MLB history, a combined 48 (26 by Yankees’ pitchers and 22 by Cubs’ pitchers). That’s more strikeouts than any single player has this season. In the end, the Yankees came away with a 5-4 win after 2 a.m. Eastern, and fans everywhere were probably relieved to have this one end.

The game was proceeding reasonably normally until the bottom of the ninth, when the Yankees brought in former Cubs’ reliever Aroldis Chapman to protect a 4-1 lead. Addison Russell started the inning with a walk, then Jon Jay singled to center before Willson Contreras struck out. Pinch-hitter Albert Amora Jr. then singled, scoring Russell, and Javier Baez singled, scoring Jay.

After a whole lot of extra-innings futility, the Yankees then took the lead in the 18th, two hours and 44 minutes after the Cubs tied the game. Aaron Hicks (who infamously misjudged a Baez home run earlier in this game) led off and bunted for a hit, and Contreras threw the ball away, allowing Hicks to take second base. Ronald Torreyes then bunted Hicks over to second, and he scored on a fielder’s choice when Starlin Castro hit a ball to short and Russell’s throw home went wide of the plate. The Yankees weren’t able to add any further runs, but that would prove to be enough.

The Cubs threatened with two outs in the bottom of the 18th, with Bryant walking and Yankees’ pitcher Chasen Shreve then intentionally walking Rizzo to pitch to pinch-hitting pitcher Kyle Hendricks. Shreve then struck out Hendricks to end the game. Here’s that final strike:

That ended this one, six hours and 18 innings after it began. But the history made here is something never before done in Major League Baseball. We’ll see if anyone ever surpasses this strikeout total, but it’s going to be awfully hard to do.