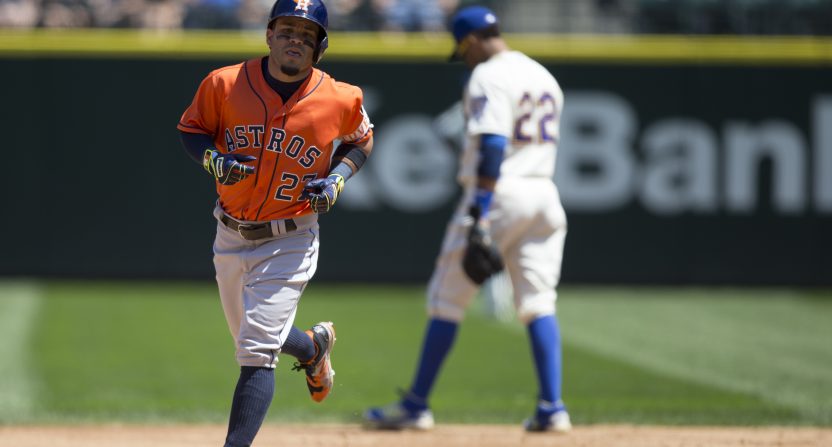 Welcome to the fifth edition of The Comeback’s MLB preview series, in which we ask our writers to banter by email about a given division, then publish the results here.

In every other division preview we’ve previewed, I’ve started with some version of the question, “How good is [insert overwhelming favorite]?” But thanks to a Rangers team that won 95 games last year (albeit with a mediocre run differential), an Astros team beloved by projections and a good Mariners team looking to end a playoff drought, this time I can ask you a more essential question: Who is the best team in this division?

Ian Casselberry: The easy answer is the Astros, right? Sports Illustrated already called this three years ago. That seemed like a savvy pick, given the loads of talent that Jeff Luhnow had hoarded for the past couple of years. Sure enough, they’re in the mix to win the AL West, as you mentioned. But their starting rotation bugs me, and I don’t think it’s good enough to win the division.

Looking over the rosters, I think the Mariners are the AL West’s best team. I realize preseason projections don’t quite agree with that. But the lineup has speed and power, and should play strong defense. The rotation looks good to me, especially in bolstering the back end with Yovani Gallardo and Drew Smyly. And I like the depth of their bullpen. But Seattle’s bench isn’t as deep as what Texas and Houston have, so this might be a team that can’t afford to have any big injuries (as if any team really can). The Mariners might also need some help in the outfield or at catcher as the season progresses, but going into the season, this looks like a roster that can win games in different ways, especially in close games.

I’m taking the easy way out and trusting the projections. The Astros were supposed to win his division last year, but the pitching staff didn’t come through and the bullpen wasn’t as tough as expected. Even Houston’s strength, its offense, didn’t quite meeting expectations, with Carlos Correa failing to live up to his rookie year and other regulars underachieving or getting hurt. Did you know this team gave 518 plate appearances to Marwin Gonzalez?

This year the Astros’ pitching staff still looks a little shaky, but, as I wrote yesterday, Dallas Keuchel and Ken Giles are prime candidates for bounce-back years, and Colin McHugh and Lance McCullers can be strong mid-rotation starters if things break right. Meanwhile, thanks in part to some offseason additions, their offense will be so, so good. Correa, Jose Altuve, George Springer, Carlos Beltan, Brian McCann, Josh Reddick, Alex Bregman. Houston could potentially have an above-average hitter at every single position.

I also like the Mariners, but they’re asking a lot of 30-something starting pitchers (Felix Hernandez, Hisashi Iwakuma, Gallardo). I see Seattle as an 86-88 win team, and that probably won’t be enough to take the division.

Let’s talk about the Rangers. As I alluded to before, last year this was a 95-win team with the run differential of an 82-win team. The projections have them in the low-to-mid 80s in 2017. Is there any chance last season was repeatable?

IC: To me, the Rangers were the most frustrating team of the offseason. I kept waiting for them to make a big move. Edwin Encarnacion was perfect for this team and was just waiting to be signed. Jose Bautista was another good fit, though I could see why Texas might have been a bit more reluctant there, given their history with Shin-Soo Choo. What about getting another starting pitcher? They couldn’t get Chris Sale or Chris Archer, and that’s a big hole that didn’t get filled.

Clearly, Jon Daniels didn’t think he needed to make such a move. Maybe he still feels burned by that Prince Fielder trade. Plus, Joey Gallo is a call away.

I don’t know if the Rangers have the pitching to compete with the Mariners and Astros, though. You mentioned their run differential last season, and that starting rotation was a mess. It looks good at the top going into the season with Cole Hamels and Yu Darvish, but what’s behind those guys? Is Martin Perez a No. 3 starter or better suited for a 4 or 5 spot? This is something Daniels will almost certainly have to address by the trade deadline. I do like the back end of their bullpen, though.

AP: Yeah, I think you nailed it. The Rangers could have used another piece, and they sat on their hands. The starting rotation in particular appears to be built on a house of cards.

Unlike last year, there might be a fourth contender in the AL West in 2016. The Angels made some incremental improvements with a mind toward defense, they’ll have Garrett Richards healthy and, oh by the way, they’ve got that Mike Trout fellow.

Do you buy the Angels’ sleeper potential?

IC: The Angels are definitely an intriguing team, especially with the defensive emphasis you mentioned. I think their lineup looks pretty good, and they filled in some holes nicely with Ben Revere and Luis Valbuena. Maybe I’m underestimating this team because of their performance the past two seasons and the fact that the front office has clearly gotten away from making the big move in favor of smaller moves that plug holes and improve the overall roster. But I’m having trouble seeing the Angels overtake the three teams we’ve already talked about.

What am I missing, Alex? Are you buying into the Angels?

AP: I won’t be picking the Angels to make the playoffs, but I can imagine them being that team that’s a few games above .500 at the All-Star Break and hangs around the fringes of the playoff race before winding up at 83 wins.

They’ve got a pitch-to-contact rotation that now has a defense behind it that will turn balls in play into outs. And if Richards is healthy, that’s a legitimate starter to head a sneaky-good rotation. And thanks to the off-season move, there won’t be quite as many at-bats going to replacement-level players in 2017. At the very least, you can now kind of see a path to contention before Trout becomes a free agent.

In other words, they’re in better shape than the A’s, who might be the most directionless team in baseball. Oakland is a bad team devoid of exciting young players or a promising farm system.

Can you find any silver lining to the Athletics’ current position?

IC: The A’s might be the one team in MLB whose pre- and post-game studio shows could be more interesting than the games, now that Jose Canseco has been hired as a studio analyst. He could potentially be a lot of fun to watch, covering a bad baseball team rather than a good one. How many teams can boast that going into the season?

Oakland potentially has a good lineup. To me, they look pretty strong one-through-seven in the batting order, highlighted by 42-home-run slugger Khris Davis batting cleanup. Even at the bottom, Yonder Alonso has never lived up to his billing, but he could get a lot of line-drive hits in that spacious O.Co Coliseum outfield. And Jed Lowrie strikes me as a pretty good bat in that No. 9 spot. The A’s scored the fewest runs (653) in the AL last season, but I don’t think they’ll repeat that performance.

And what about the starting rotation? Sure, Sonny Gray is at the top, but one of this season’s recurring storylines will be when he gets traded. And he’s coming off an awful season (5-11, 5.69 ERA). There are some intriguing arms in the mix with Sean Manaea, Jharel Cotton and Andrew Triggs. All three pitched well in short stints last season. The question will be if that can continue with an increased workload and opponents becoming more familiar with them.

However, I really like the A’s bullpen. They appear to go six deep into that relief corps, a luxury that plenty of other MLB teams would love to enjoy. (Interestingly, it’s closer Ryan Madson who might have the least imposing strikeout stuff.) That might lessen the burden on the starting rotation, in addition to giving David Forst and Billy Beane quite a few pieces to deal away when contenders are looking for relief help. I wonder if this team will win more games than expected because their bullpen holds onto leads or gives the offense a chance to rally.

AP: Anyone who lets Jose Canseco anywhere near a microphone seems to be asking for trouble, but we’ll see how that works out.

So let’s get to predictions. Give me an order of finish for the AL West, plus a Player of the Year (hmmm who to pick?), a Pitcher of the Year and an under-the-radar player to watch.

IC: As we’ve gone through the division, I think I’ve talked myself into the A’s over the Angels. I got yer sleeper RIGHT HERE. Can we still be friends, Halos fans?

AP: Ouch, no love for the Angels, whom FanGraphs actually project to finish SECOND in this division.

Here are my picks: