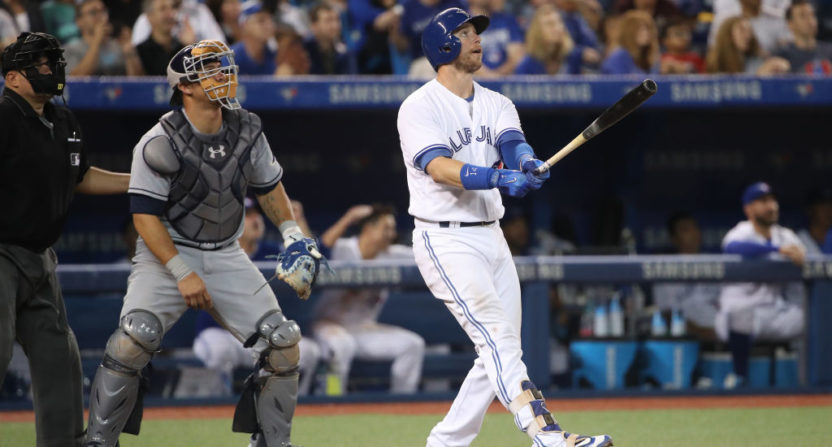 There have been plenty of surprising players and events during the 2017 MLB season, most notably the absurd surge in home runs across the league (especially from players that haven’t been known for their power in the past). Putting together a full starting nine (along with a bonus reliever to make it an even ten) of surprising players isn’t easy, but this was our best effort to create an all-surprise team for the 2017 MLB season.

Catcher: Kurt Suzuki.
Suzuki was one of many beneficiaries of the 2017 MLB power spike. This year, half of Atlanta’s backstop platoon launched 18 dingers in just 78 games, a new career-high. That number is even more surprising when you consider that in his prior three seasons with the Twins, Suzuki homered a total of 16 times in 368 games. Throw in an improved triple slash (.278/.347/.529, compared to just .257/.313/.381 for his career), and it’s no wonder the Braves already gave him a new contract for the 2018 season (at the bargain price of just $3.5 million).

First Base: Justin Smoak.
Smoak has hit 38 home runs this year, nearly double his previous career high of 20. He was once a top prospect in the Rangers organization, but was dealt to the Mariners in the Cliff Lee trade and his career stagnated. In his third season with the Blue Jays, Smoak has finally put it all together, reaching career-highs in not only homers, but also batting average, OBP, and slugging, not to mention a career-best strikeout rate and a walk rate better than his career average.

Smoak is signed cheaply next season at $4.125 million, and the Jays hold a club option on him for $6 million that could rise as high as $8 million depending on how many plate appearances he records in 2018. Maybe now would be the best time for Toronto to cash in on his value, given that Smoak has never come close to matching the .372 wOBA and 133 wRC+ he’s posted this season.

Second Base: Scooter Gennett.
Earlier this year, Gennett had the most improbable four homer game in MLB history. He’s gone on to smack 27 longballs this season, quite a feat for a player that came into 2017 with just 35 homers in four career seasons with the Brewers. Gennett has actually shown signs of being a competent major leaguer before, slashing .324/.356/.479 over 69 games during a very nice rookie year in 2013. But I don’t think anyone, not the Reds and certainly not the Brewers, expected Gennett to hit .297/.344/.543 this season. Not bad for an end of Spring Training waiver claim, right?

Shortstop: Zack Cozart.
Cozart was voted into the All-Star Game as a starter this summer, which is pretty incredible given that he’s Zack Cozart and had just one MLB season with at least a 100 wRC+ coming into 2017 (and that was a 53 game stint in 2015). Like his Reds teammate Gennett, Cozart has been fantastic this year, homering 23 times while hitting .302/.388/.557 with a double digit walk rate and his typical strong defense at shortstop. Cozart will be a free agent this winter and is poised to cash in on his strong 2017, but will teams really be lining up to give the 32-year old a sizable contract? Even if not, he’ll get a nice raise on the $5.3 million he’s making this year.

Third Base: Travis Shaw.
The Red Sox traded Shaw (*and* three other players!) to Milwaukee for Tyler Thornburg. Thornburg hasn’t thrown a pitch this season following thoracic outlet syndrome surgery. Shaw, meanwhile, has slashed .273/.347/.519 in 140 games with 31 homers, a strong season after he took a substantial step back in 2016 with the Red Sox (.242/.306/.421, 16 homers). Boston can’t be too upset with the trade, given the strong performance of rookie Rafael Devers at the hot corner, but Shaw’s success has been a huge part of the Brewers’ great 2017 season.

Left Field: Tommy Pham.
Pham spent the first month of 2017 in AAA for the Cardinals after an underwhelming half season in the majors in 2016. The 29-year old has made the most of his chance since getting called up in early May however, stealing 23 bases and homering 23 times while hitting an outstanding .310/.411/.530. At 29, it’s unlikely that there will be much room for Pham to grow, but what looked like it could have been a lost season for St. Louis was rescued by the strong performance of Pham.

Center Field: Michael Taylor.
Taylor was given a crack at the Nationals’ center field job in 2015 when Denard Span was hurt, and couldn’t seize the opportunity, hitting a poor .229/.282/.358 with 14 homers and 16 steals. He was relegated to bench duty in 2016 in favor of Trea Turner the even more poor Ben Revere. But he got another shot in 2017 thanks to Turner shifting to shortstop and Adam Eaton’s unfortunate knee injury early in the season. Over 122 games, Taylor has homered 17 times and stolen 16 bases, but has bumped his triple slash all the way up to .270/.316/.476, notching career highs in both doubles (22) and triples (three) along the way.

The Nationals aren’t going to relegate Eaton or Bryce Harper to the bench in 2018 in favor of Taylor, but with Jayson Werth’s mammoth contract finally expiring, maybe Washington has an in-house replacement for him until uber-prospect Victor Robles is ready to go at the major league level.

Right Field: Avisail Garcia.
Garcia has never really been a good MLB player, spending his entire career in the AL Central following a 2013 three-team trade that sent him from the Tigers to the White Sox. In his parts of five MLB seasons prior to 2017, he had logged a 100 wRC+ just once (101, in 46 games in 2014) and never flirted with an above average triple slash across the board. That all ended this year, however, when Garcia broke out in a big way (thanks in large part to an incredible .392 BABIP). Over 132 games, Garcia has hit a career-high (gee, that seems to be a common theme today) 18 homers while slashing .330/.379/.507.

Sure, he’s still barely walking and striking out too much, but he’s actually playable now! I think that alone should be considered a success. And based on that success this year, he’s gone from a guy that could have been nontendered by the White Sox to someone they could receive actual value for in the offseason.

Starting Pitcher: Jimmy Nelson.
Nelson is one of the biggest reasons that the Brewers have stayed in the hunt for a playoff spot as long as they have. Over 175 1/3 innings, Nelson has struck out 199 hitters, walked only 48, and pitched to a 3.49 ERA. Nelson was within spitting distance of his career high in innings pitched (179 1/3, set in 2016) while notching career bests in strikeout rate, walk rate, and ERA. Nelson was arguably a top five pitcher in the National League this season (in fact, he ranks fourth in fWAR among NL pitchers, just ahead of Clayton Kershaw and just behind Zack Greinke).

Unfortunately, Nelson’s story doesn’t have a great ending – he was injured sliding on the basepaths earlier this month and required shoulder surgery that is expected to sideline him into 2018.  It’s a terrible outcome for a season that was encouraging for so many reasons.

Relief Pitcher: Anthony Swarzak.
Reliever performance is notoriously volatile. But I don’t think anyone would have expected Anthony Swarzak to be one of the best relievers in baseball in 2017. Swarzak was signed by the White Sox this January as a minor league free agent, made the Opening Day roster, and was traded to the Brewers four months later. All he’s done over the course of the year is pitch to a 2.17 ERA over 74 2/3 innings, strike out 89 hitters, and walk 17. His 2.3 fWAR on the season ranks sixth-best in baseball, ahead of every reliever from both the Yankees and Indians, Wade Davis, and Ken Giles, among many others.