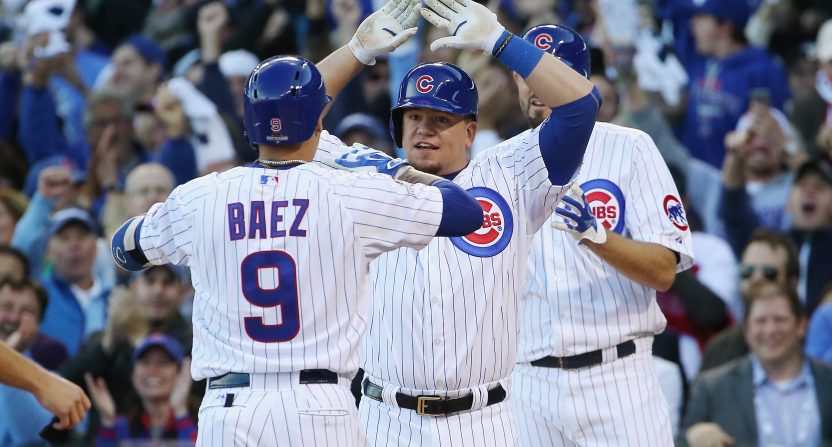 Welcome to the fourth edition of The Comeback’s MLB preview series, in which we ask our writers to banter by email about a given division, then publish the results here.

Alex Putterman: We have every reason to think the Chicago Cubs are by far the best team in baseball. They won 103 games last year—by far the most in the league—and their Pythagorean win-loss record suggested they should have won even more. They dispatched three very tough playoff opponents to capture the World Series title. Now almost the entire team is back and all its young stars are a year older. Once again, the Cubs appear unstoppable.

And yet… FanGraphs projects the North Siders to drop from 103 wins to 94 and has them tied with the Dodgers as baseball’s best team. Baseball Prospectus is even less optimistic, projecting 92 wins, four fewer than L.A. and one behind the Houston Astros.

Matt, you follow the Cubs extremely closely. Do you see this as a dominant roster in line with last season’s juggernaut? Or is it just another top-tier team? Is there separation between the Cubs and baseball’s other top contenders?

Matt Clapp: Well, it would be pretty damn difficult to win 103 games again, at least. That took so much good fortune—health mainly, of course—and included run prevention unlike anything we’ve ever seen really. So it would be unreasonable to expect these things to happen again, but from a roster standpoint, I don’t see how the Cubs are any worse on paper.

Yes, they lost Dexter Fowler and Aroldis Chapman. But they also get a full season of Kyle Schwarber, a full season of Willson Contreras (I think he’s the most underrated guy when people talk Cubs right now), and they replaced Chapman with Wade Davis (who’s been about as good as any closer in baseball over the last few years). Jon Jay is a perfectly fine veteran placeholder in center field, and Albert Almora can be a 2-win center fielder already with his terrific glove and good-enough bat (he hit two homers and a double on Sunday, for example).

So, I think the Cubs should still be viewed as the team to beat heading into 2017. Then again, the gap isn’t large at all either. In the National League, the Dodgers could easily finish with a better record, and the Nationals aren’t far off either. And in the American League, the Red Sox and Indians are in the same conversation roster-wise as the Cubs. The Indians’ roster is better on paper than the one that just took the Cubs to Game 7 of the World Series.

AP: The pattern we’ve really seen throughout this season preview series is one team that’s expected to dominate the division and four others fighting for scraps, and the NL Central looks no different.

But a lot can happen over a long season, and the Pirates and Cardinals again look like competent—though very flawed—playoff contenders. If anyone was going to make the Cubs sweat a little, who would it be?

MC: The Cardinals are the better team right now in my opinion, and have the higher floor. I think that—health provided—they’re safely in the 82-89 win range. But I have a hard time seeing their path to anything higher than that, especially after the loss of stud pitching prospect Alex Reyes to Tommy John surgery. It would take a few career years and for players like Adam Wainwright and Yadier Molina to turn back the clock. I’d never count the Cardinals out, but they would really need a lot to go right.

The Pirates seem to have one of the widest ranges of possible record in the majors. A few things go wrong, and they could be below .500. But I could also see them entering the 90+ win range if some things were to go right. What if Andrew McCutchen turns into a 6+ WAR player again after a disappointing 2016? What if Gregory Polanco—we saw his terrific skills in the WBC— puts it all together for a full season and is the superstar everyone knows he can be? What if Jameson Taillon makes the jump from pretty good young pitcher to ace-level pitcher?

So, I think the Cardinals are the better bet to finish second place, but the Pirates may have the higher potential to make a run at the Cubs. Still, even if all of those things were to go right for the Pirates, it would likely take the Cubs disappointing or dealing with a few key injuries for anyone but Chicago to have a realistic shot at winning the NL Central.

AP: You’re right about the Pirates having a higher variance than St. Louis, but I still think Pittsburgh is the better team. Both the Cards and Pirates have tons of question marks in their starting rotations, and though St. Louis has more pitching depth, I’d take Gerrit Cole and Jameson Taillon over Carlos Martinez and whomever is St. Louis’ No. 2 starter. Offensively, I prefer Pittsburgh. Even without Jung Ho Kang (who is stuck in Korea without a visa), the Pirates’ lineup is deeper and stronger than the Cardinals’.

As you mentioned, the Pirates also have more upside, with budding stars like Polanco, Taillon and Starling Marte, plus prospects like Josh Bell, Tyler Glasnow and Austin Meadows who could contribute in 2017. The Cardinals remain excellent at turning unheralded prospects into good players, but that magic was more useful when those guys were complementing the team’s stars. Now, there are no true stars on this roster (sorry, Yadi) and the Cards are relying heavily on average or slightly above-average players with low ceiling. I think if anyone can challenge the Cubs, it’s the Pirates.

But speaking of teams with some upside, here’s a sentence I haven’t been able to write for a while: A lot of people are excited about the Brewers this season. Last season, Milwaukee far and away led the Majors in stolen bases, and behind Jonathan Villar, Keon Broxton and others, the Brewers earned a reputation as one of baseball’s most watchable bad teams.

As someone who watches a lot of NL Central baseball, how do you feel about the Brewers? Can they be goodish? Will they at least be fun?

MC: The Brewers will be watchable and fun, yes. They could be very bad and still be more interesting than some teams above .500. But the FanGraphs projection I disagree with the most is actually where the Brewers are slotted, tied with the Reds for 70 wins, with only two teams (White Sox and Padres) projected to be worse. The Brewers feel more like a 75-win kind of team to me, and one that will show glimpses of an eventual contender.

We talk about the Cardinals and Pirates, but if the Cubs keep being as good as their roster says they should for the next few years, Milwaukee may actually be the team that unseats them first in the NL Central. Obviously not this year, but their farm system is loaded and there is already some very impressive young talent at the big league level.

You alluded to Villar and Broxton; they may be the two most interesting guys in the division that the average baseball fan has probably never even heard of.

I’ve never described a player like this because it’s a ridiculously high standard, but Villar is kind of a Rickey Henderson lite. He’s the rare leadoff hitter that hits for power (19 homers last year), gets on base (.369 OBP last year), and and steals bases (62 stolen bases last year).

And Keon Broxton is so damn interesting. He was worth two wins over just 75 games last year while striking out 36% of the time. That’s what happens when you also walk 15% of the time, hit for some power, make an impact on the base paths, and play great defense. He’s a terrific athlete that does everything well… except make contact! He literally struck out or walked in over half of his plate appearances last year. But his upside seems quite large, especially if he can start putting the bat on the ball a little more.

AP: So basically Jonathan Villar is Rickey Henderson and Keon Broxton is Reggie Jackson with more speed. Got it.

Before we go, I suppose we should acknowledge the existence of the Reds, who figure to be both bad and boring this year. Cincinnati is stuck between the Votto/Phillips/Cueto/Bruce era and whatever era comes next, only Votto is still around clogging the team’s balance sheet and preventing them from fully tanking for draft picks. Aside from Billy Hamilton, it’s hard to find many reasons to be excited about this team.

So here’s the hardest question I’ve posed to you today: Why should I care about the Reds?

I brought up how I disagreed with the FanGraphs’ projections for the Brewers earlier, and the bigger thing to me was that the projections consider Milwaukee to be as bad as the Reds, and I just don’t see it. I think the Reds are on another level of bad. If they end up being the worst team in baseball this year, no one should be surprised. Scott Feldman is their Opening Day starter. Scott Feldman! Did you know they have Bronson Arroyo? Yes, Bronson Arroyo, in 2017! He’s 40 and last threw a major-league pitch three years ago.

Billy Hamilton is neat and Joey Votto is still one of the most amazing hitters alive, sure. But Cincinnati’s only legitimately good pitcher is Raisel Iglesias… a guy who is currently out with injuries after falling in the shower. And there’s a good chance that story is the most interesting thing involving the Reds for the rest of 2017.

AP: All right, let’s get some predictions. Give me a predicted order of finish, plus a Player of the Year, Pitcher of the Year and under-the-radar player to watch.

I assume you’ve got the Reds in first place?

MC: Ya know, I considered it, but just feel like this may not be their year.

And yeah I basically flipped a coin between Lester and Arrieta. Jake’s command was such crap in the second half but I think some time off was good for him and it’s a contract year, so I could see him having a huge year.

AP: Yeah, I had Oh on two fantasy teams last year and was very glad I did.

To be honest, if you’d picked Arrieta, I might have gone with Lester. You can’t go wrong there.

1 thought on “2017 NL Central preview: The Cubs are better than everyone else… but by how much?”