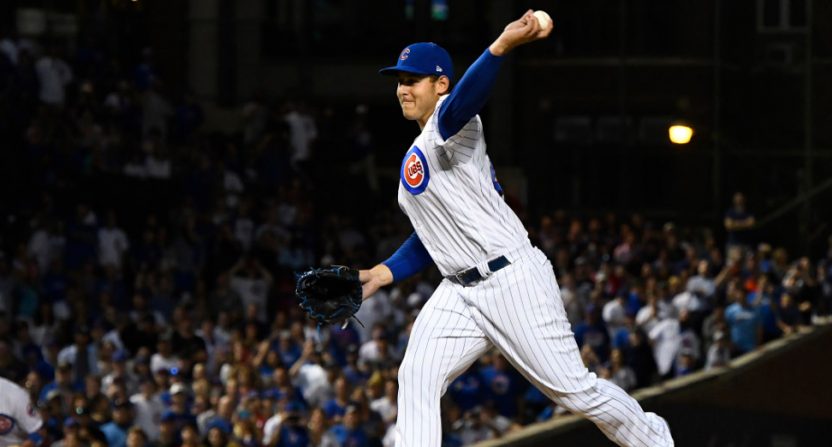 Position players pitching in Major League Baseball is going from a rare occurrence to something that seems to be happening at least once a week. Last year, Fangraphs’ Jeff Sullivan (in July) and MLB.com’s Anthony Castrovince (in September) both touched on how much that had changed over the years, how the trend was rising, and how 2017 was set to break records. And it did, with at least 35 appearances by the end of the year. (There were 35 as per Castrovince’s Sept. 12 piece.) But 2018 is set to smash numerous records on that front, with 25 different players posting 27 appearances covering 25 innings through July 12 (as per Max Rieper of Royals Review; note that that number doesn’t count legitimate two-way players like Shohei Ohtani, and that you can see Rieper’s list here), and numerous others following suit since.

The list of players following since includes three from the Chicago Cubs ( Tommy La Stella, Victor Carantini and Ian Happ) on Friday and two from the Brewers (Hernan Perez and Erik Kratz) on Sunday. And on Monday, two teams used two position players, with Carantini and Anthony Rizzo (in his MLB pitching debut) toeing the mound for the Cubs (in a 7-1 loss to the Diamondbacks) and Carlos Tocci and Ryan Rua stepping up for the Rangers (in a 15-3 loss to the A’s). And Rizzo, who’s been lobbying for this chance for a while (and was faked out by Maddon in favor of Carantini earlier in this game before finally getting to take the mound), got A.J. Pollock to fly out on just two pitches:

Yes, you read that right. pic.twitter.com/jUvUCb26J3

He brought the extra velocity on that second one, too:

Anthony Rizzo's first pitch was 53.6 mph but he ramped it up to 62 mph to retire AJ Pollock.

Love seeing pitchers reach back for a little extra in a big spot.

And Rizzo had some great quotes afterwards:

“The end. That’s it. It was awesome. I promised Joe [Maddon] I wouldn’t blow out [my arm],” Rizzo added. “I’ve been working on that for six or seven years now with [Mike Borzello] every day during BP. It was pretty crazy standing on that mound.”

And on only having to throw two pitches:

“I got to do what I wanted to do. A lot of fun and a career zero ERA now.”

Meanwhile, Rua pitched a scoreless inning and recorded a strikeout:

This is just part of a much larger trend, though, and a huge change from how this has looked historically. For the big picture, consider Sullivan’s graph from last July, showing position player pitching appearances from 1967 through mid-2017: 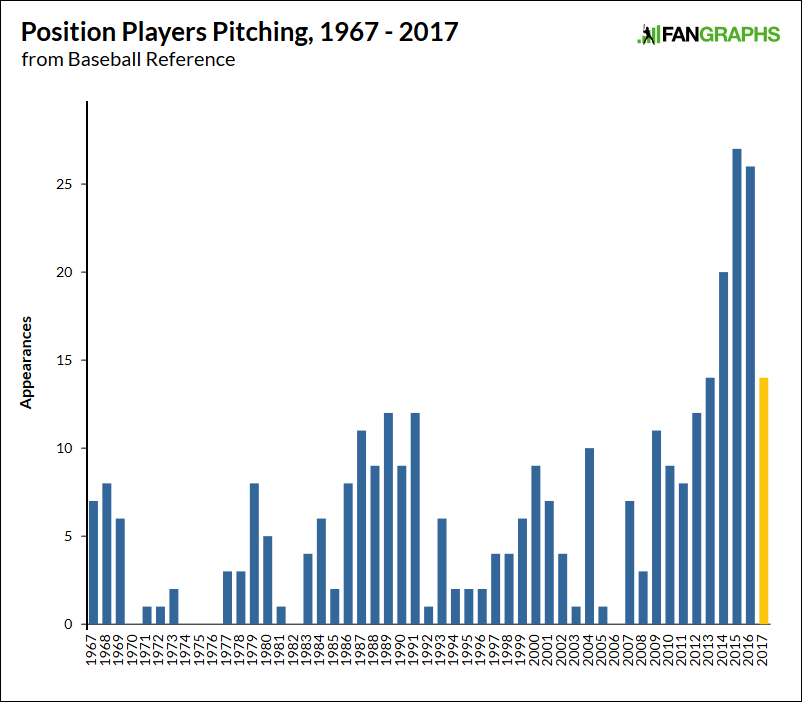 And for the more localized picture, consider Castrovince’s graph of the years since 2000 from last September 12, at which point there had been 35 separate appearances from position players: 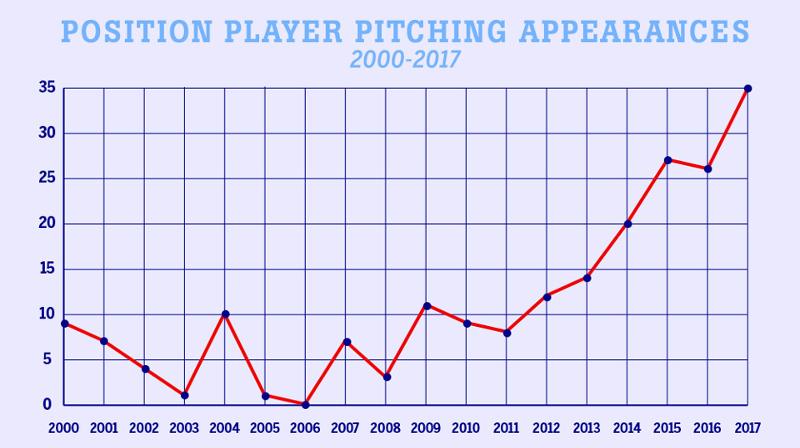 But 2018’s set to shoot even higher, and the extensive list of non-pitchers with pitching appearances will only keep growing. Why is that? Well, some of it’s that there are more blowouts (Rieper defines those as a run diffential of eight or more, and wrote that there were 253 last year and a pace for 230 this year, a far cry from 1988’s 146. And as per quotes in Castrovince’s article from Twins’ backup catcher Chris Gimenez (one of the players who’s done this more than many) and  Indians’ manager Terry Francona, some key factors involve smaller bullpens, shorter starter outings, and managers realizing that some games are truly out of hand and the bullpen could use a rest:

“I think the way teams are built now, bullpens are more specialized, and guys are getting used a lot more out of the bullpen for certain reasons,” Twins backup catcher Chris Gimenez said. “Starters aren’t necessarily going eight or nine innings now. It’s five innings, then the bullpen comes in and closes down rest of the game. When you do that so many times, you’ve got to get those guys rest at some point. I think it’s just easier to throw the backup catcher or infielder or outfielder or whatever it may be.”

…”Teams are trying not to carry the eight-man bullpens,” Indians manager Terry Francona said. “I love [the eight-man ‘pen], but Chris [Antonetti] and a lot of GMs are like, ‘You don’t get the bang for your buck.’ So you go with seven men. And if you have a blowout, who cares if you lose by 12 or 13?”

That makes some sense; why expend a valuable resource (reliever arms) in a game where your chances of winning are next to nil? And why carry eight relievers if you can get better production from using that slot on another situationally-useful position player, and if you can give your shorter bullpen the occasional break in favor of a position player in a blowout loss? But it does mean that the once-rare sight of a position player pitching is becoming a reasonably-regular occurrence. And if the trend keeps going this way, we’ll see it more and more.