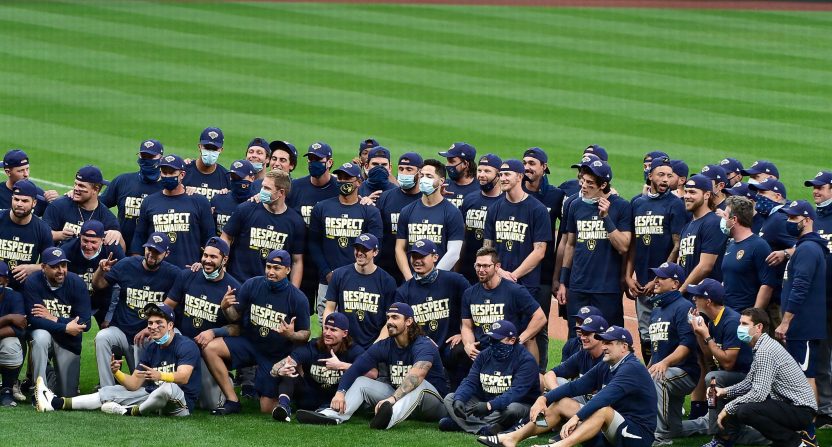 At the start of MLB action on Sunday, there was potential for a truly chaotic day. In the American League, all eight playoff spots had been clinched, but only two of the eight seeds had been locked in. Over in the National League, six spots were clinched and four seeds were locked up. But when the dust settled and the smoke cleared, the standings at the end of the day ended up mirroring the standings at the beginning of the day.

In the AL East, the Tampa Bay Rays had long clinched the division and the AL’s top seed. But either the Yankees or Blue Jays could clinch the second spot in the division and fifth seed in the AL, with the other team falling all the way down the pecking order in the American League to eighth. However, needing just a win over the Orioles following the Yankees’ loss to the Marlins, Toronto fell 7-5. They’re the eight seed, and the Yankees are the five.

The Minnesota Twins dodged a bullet in the AL Central. They held on to the division, but dropped down a seed, after losing 5-2 in 11 to the Reds. Had the White Sox won and the Twins lost, Chicago would have claimed the division thanks to the tiebreaker edge. But the Cubs beat the White Sox 10-8, and when combined with the Indians’ 8-2 win over the Pirates, the South Side club has been bumped all the way down to the AL’s seventh seed. Cleveland claims the fourth seed and will host the Wild Card round of the playoffs.

The AL West had been drama-free for some time, thanks to the Oakland Athletics’ early clinch of the division. On Friday night, the Houston Astros clinched the sixth seed (and second place in the AL West) thanks to the Angels’ loss to the Dodgers. But the A’s moved up from the third seed to the second thanks to the Twins’ extra inning loss to the Reds, and Oakland’s possession of the tiebreaker.

Over in the National League, the Dodgers, Braves, and Cubs all clinched their division and the top three seeds in the league, while the Padres claimed the final home-field slot as the fourth seed. The Marlins and Reds also clinched playoff berths, but how would the rest of the picture shake out?

Both the Marlins and Cardinals won on Sunday, giving the Cardinals a playoff spot and the NL’s fifth seed, percentage points ahead of the Marlins, who were bumped to the six seed. The Cardinals also owned the season-long tiebreaker over the Reds, nudging Cincinnati down to the seventh seed (despite their win over the Twins).

There wasn’t much to talk about with the Dodgers, the NL West champion and top seed in the league, and Padres, who clinched the second place slot in the division and the fourth seed in the NL.

So, what about that last playoff spot?

At the start of the day, the Cardinals, Brewers, Giants, and Phillies were all vying for it. The Phillies held the tiebreaker over both the Brewers and Giants, needing only a win of their own and a loss by both of those teams to advance into the playoffs. But apparently, no one told Philadelphia that – they were shut out 5-0 by the Rays, falling out of the playoff picture. The Cardinals clinched a playoff spot and second place in the NL Central with their win over Milwaukee, putting the Giants in pole position. But San Francisco’s rally against San Diego fell short, and their 5-4 loss meant they were tied with the Brewers for the final spot with 29-31 records. And with the Brewers owning the tiebreaker over the Giants, we’re right back to where we were at the start of the day: with the Brewers in and the Giants out.

So after all that, the NL playoff picture stayed exactly as it was entering the day, and the AL saw both the two and three seeds and four and seven seeds swap places.

Here’s what your playoff picture looks like. The American League Wild Card series will start on Tuesday, and the National League will start on Wednesday. All will be best of three matchups, hosted by the higher seed.