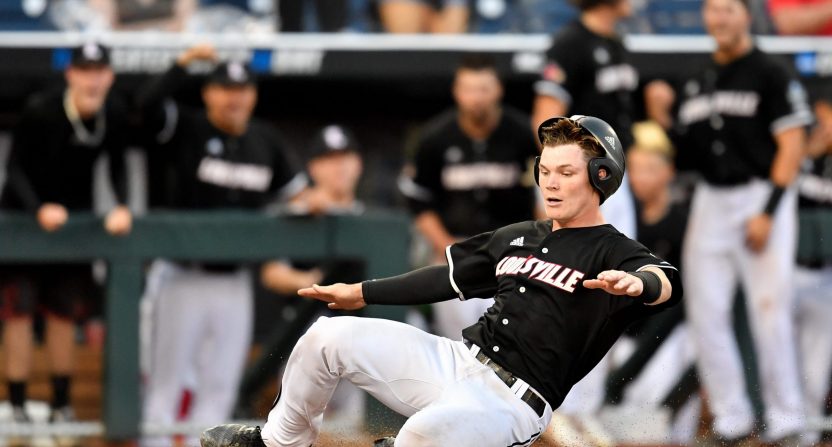 The 2021 MLB Draft is underway on Sunday night in Denver, and the top of the draft has featured a few surprises. The surprises began with literally the top pick.

Despite most mock drafts and reports expecting the Pittsburgh Pirates to take Eastlake HS (CA) shortstop Marcelo Mayer with the No. 1 overall pick, the Pirates instead selected Louisville catcher Henry Davis (friend of the program Greg Zumach did have Davis going to the Pirates, to be fair).

Davis, 21, ranks fifth overall on MLB Pipeline’s top prospects, receiving a 60 overall grade (Future Value; FV) from the scouting community. He’s viewed as a very good catcher (which has plenty of value in itself) that also has 20-homer power potential with a good plate approach offensively.

With the second pick, the Texas Rangers took the best-known player in this draft, in Vanderbilt pitcher Jack Leiter. The son of former big league pitcher Al Leiter looked downright unfair in many of his performances at Vanderbilt (examples here and here), and ranks as the No. 2 prospect according to MLB Pipeline. He should move quickly through the Texas system.

At No. 3, the Detroit Tigers went with a pitcher with similarly nasty stuff, but from the high school level. Detroit selected Heritage Hall HS (OK) right-hander Jackson Jobe, who has a wipeout slider with fantastic spin rates, to go with a fastball that touches 96 mph (and keep in mind the velocity may still increase for a an 18-year-old pitcher). He ranks as MLB Pipeline’s No. 7 prospect, and his enormous upside has him deserving of a selection this high.

The perceived top prospect in this draft (according to MLB Pipeline and other outlets) fell to the No. 4 pick, where the Boston Red Sox were thrilled to scoop him up. Mayer is an 18-year-old prospect that does everything well on the baseball field, and at a premium position in shortstop. His game/potential draws some Corey Seager comps.

Two more surprises came in the top 10, with the Kansas City Royals taking East Catholic HS (CT) left-handed pitcher Frank Mozzicato with the No. 7 pick (ranked No. 39 on MLB Pipeline’s list), and with Vanderbilt right-hander Kumar Rocker falling to the New York Mets at No. 10. Rocker — along with his teammate, Leiter — was viewed as a possibility to go No. 1 overall entering this season.

College World Series hero Will Bednar — right-handed pitcher — of Mississippi State went No. 14 to the San Francisco Giants. And the Miami Marlins got a steal at No. 16 with the selection of Wake Forest HS (NC) shortstop Kahlil Watson, who ranked No. 4 on MLB Pipeline’s board.

Update: Here’s a crazy one. The Oakland A’s selected Thousand Oaks HS (CA) shortstop Max Muncy with the No. 25 pick.

Yes, really- that’s his name, and he’s not related to the Max Muncy — current Los Angeles Dodgers star — that the A’s drafted in 2012 (that Muncy also played two MLB seasons with the A’s). They even have the same birthday of Aug. 25! Amazing.

The Oakland A's have drafted a brand-new Max Muncy, nine years after drafting the original Max Muncy that now plays for the Los Angeles Dodgers.

They even have the same birthday (Aug. 25). And they're not related. pic.twitter.com/1lR43mNYMN