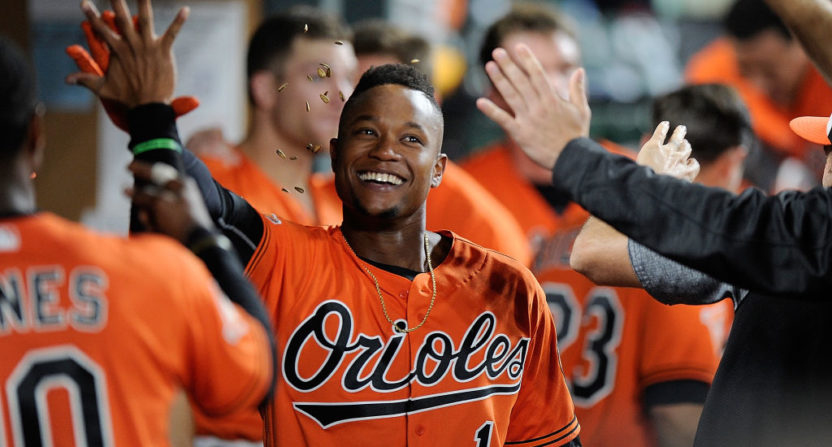 You can be forgiven if, at this year’s Major League Baseball trade deadline, you were focused more on Sonny Gray and Yu Darvish than on Tim Beckham.

Beckham, a former No. 1 overall pick who took eight years to reach the Majors for good, was dealt from Tampa Bay to Baltimore in a deadline deal no one paid much attention to. Baltimore’s playoff hopes looked dire, but for the price of a low-A pitcher with an ERA of 3.94, Beckham and his .259/.314/.407 seemed like a solid add. Still, it’s not as if the 27-year-old shortstop was going to change their fortunes or anything.

That tweet was sent minutes after Beckham launched a 3-run home run off Red Sox starter Eduardo Rodriguez to give the Orioles a 5-0 lead at Fenway Park on Saturday. Baltimore is 12-11 since acquiring Beckham, good enough to sneak back into the AL playoff chase. The O’s entered Saturday three games behind the Twins for the second wild-card spot and will cut the deficit to two if they can hang on in Boston. Their playoff odds aren’t great, but they’re more than trivial.

Without Beckham, it seems safe to say, the Orioles would have little shot at a postseason berth. The shortstop has been Baltimore’s best hitter since he arrived and has seized the team’s leadoff role in recent weeks. Even before Saturday’s big home run, he had been worth 1.8 wins above replacement for the Orioles, per Baseball-Reference (after being worth 1.2 in four months with the Rays). Beckham’s presence has been the difference between Baltimore falling out of the wild-card race and sticking right in it.

As a bonus for the Orioles, the acquisition of Beckham has damaged a wild-card rival. Tampa is effectively tied with Baltimore in the standings (with one more win as well as one more loss) despite getting little middle-infield production from Adeiny Hechavarria, Brad Miller Daniel Robertson and the newly acquired Danny Espinosa. Had they not traded Beckham, the Rays could very well be leading the race for the second wild-card spot—or at least a couple pegs closer to the top than they are now.

This is the part where we note that Beckham has a .462 BABIP in Baltimore, which is not remotely sustainable. Obviously he’s not a .400 hitter—hell, he’s probably not even a .300 hitter. But the wins Beckham has helped the Orioles rack up are already in the books. If he immediately reverts to being the league-average player he was the first half of this season, he’ll still have been a great add for Baltimore.

In Tampa, Beckham was always going to be known as that guy who squandered his top-pick potential and suffered from a bad attitude. In Baltimore, he could be known as the guy who leads the O’s to an unlikely playoff berth.