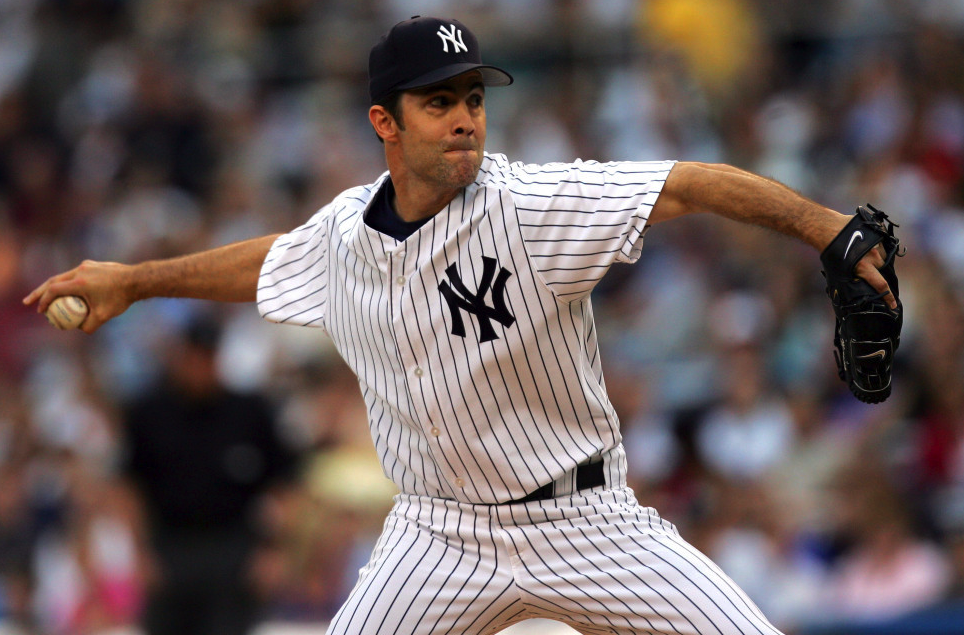 Mike Mussina is in his fourth year on the ballot for the Baseball Hall of Fame, and momentum is beginning to build for his candidacy. He’s a fixture in Hall of Fame arguments around this time of year and in last year’s balloting, he shot up from 24.6 percent of the BBWAA vote to 43 percent.

But Mussina is still well short of the 75 percent threshold necessary to reach Cooperstown, and that’s just not right. Over 18 seasons with the Baltimore Orioles and New York Yankees, from 1991 to 2008, the right-hander again and again proved himself one of the best pitchers in baseball, and it’s about time to recognize his greatness with a plaque.

In honor of Mussina’s longtime jersey number, here are 35 reasons the Moose belongs in Cooperstown.

Unless otherwise cited, all stats below come from Baseball-Reference or Fangraphs.

1. By traditional numbers, Mussina was one of the best pitchers of his era and of all-time. His 270 careers wins are the 17th-most of any pitcher post-World War II and the most of anyone who began his career after 1990.

2. Among pitchers who have played at least 15 big-league seasons, Mussina is 10th with a .638 winning percentage. Everyone ahead of him is in the Hall of Fame, except for Roy Halladay (who isn’t yet eligible) and Roger Clemens.

3. Mussina ranks 19th in baseball history with 2,813 strikeouts. The only pitchers ahead of him not in the Hall of Fame are Clemens, Curt Schilling and Mickey Lolich.

4. Though Mussina’s career 3.68 ERA is not dazzling, it becomes more impressive when you consider that he played in an extremely hitter-friendly era.

5. Not only that, but Mussina pitched his entire career in what was usually the best offensive division in baseball, the AL East. When he was with the Orioles, he faced tough Yankee and Red Sox lineups. When he was with the Yankees, the Red Sox were even better, and the Blue Jays were extremely tough, as well.

6. Stats that take context into account reveal that Mussina, despite his relatively pedestrian ERA, was one of the game’s best. His career ERA+ of 123 is better than that of Bob Feller, Warren Spahn and Don Drysdale, among others.

9. Mussina’s K/BB ratio of 3.58 is second-best all-time, just ahead of Greg Maddux and behind only Curt Schilling.

10. Mussina never won a Cy Young Award, but he finished in the top six in voting a remarkable nine times. In retrospect, he had a strong case to win the honor in 1992 and 2001.

11. Mussina also never threw a no-hitter, which might have provided a defining moment to headline his candidacy. But he did once come one strike from a perfect game. Carl Everett broke up Mussina’s near-perfecto with a two-strike and two-out bloop single in the ninth on Sept. 3, 2001.

12. Mussina made only five All-Star Games, but there’s an easy explanation for that: During his career, he pitched better in the second half of the season (3.58 ERA, 7.4 K/9) than he did during the first half (3.77 ERA, 6.9 K/9). Five times, he finished in the top six in Cy Young Award voting during a season when he didn’t make the All-Star Game.

13. Though Mussina never led the American League in ERA, he finished in the top eight 11 times.

14. Though Mussina never led the American League in strikeouts, he finished in the top eight 10 times.

15. In 2001, Mussina led the American League in Fielding Independent Pitching, and he finished in the top eight in that category 12 times.

17. By the gray-ink test, which measures how often players appear in the top-10 in relevant categories, Mussina is well above the average Hall of Famer.

20. Mussina was one of the best defensive pitchers ever, winning seven Gold Gloves, which is tied for fifth most all-time at his position.

21. Mussina was never connected, in any way, to performance enhancing drugs.

22. Mussina stacks up extremely well against several pitchers who have been voted into the Hall of Fame in recent years. He struck out 200 more batters than Tom Glavine, while walking barely half as many. He trails Glavine in ERA, but leads the former Braves lefty in ERA+.

24. Mussina is comparable with Smoltz and Glavine despite having played most of his career in a much tougher division, in much tougher ballparks for pitchers and in front of much weaker defenses.

25. Jack Morris was almost voted to the Hall of Fame before running out of eligibility in 2014. Well, Mussina was statistically superior to Morris in nearly every way, besting him in wins, winning percentage, ERA, ERA+, FIP, strikeouts, walks, WHIP and more.

26. Some people focus on the fact that Mussina never won a World Series, but how about the fact that his teams made the playoffs nine times?

27. Mussina is not often talked about as a great playoff pitcher, but the numbers suggest he was one. In 139 2/3 career postseason innings, he posted a 3.42 ERA and 145 strikeouts.

28. In one of the biggest moments of his career, Mussina came through with an epically clutch performance. After Clemens lasted only three innings in Game 7 of the 2003 ALCS, Mussina entered in relief and hurled three scoreless frames to keep the Yankees within striking distance. New York famously won on a walk-off home run from Aaron Boone.

30. By James’ Hall of Fame standards test, Mussina had a better career than the average Hall of Famer.

31. By Jay Jaffe’s JAWS system, Mussina is the 28th-most Hall-worthy pitcher of all-time.

32. By Win Probability Added, which can be calculated back to 1930, Mussina is the 10th-most valuable pitcher of all-time.

33. By Baseball-Reference’s Wins Above Replacement formula, Mussina is the 24th-best pitcher of all-time, just ahead of Bob Gibson, Schilling and Glavine. The only pitcher ahead of him not in the Hall of Fame is Clemens.

34. By Fangraphs’ Wins Above Replacement formula, Mussina is the 17th-best pitcher of all-time, just ahead of Fergie Jenkins, Smoltz and Phil Niekro. Again, the only pitcher ahead of him not in the Hall of Fame is Clemens.

35. Mussina could have kept going. In his final season, he threw 200 innings, posted a 3.37 ERA and was worth 5.2 WAR, according to Baseball-Reference. If he had hung on for two or three more seasons, he could have secured his 300th win and cemented his Hall of Fame candidacy. Then this article wouldn’t even be necessary.