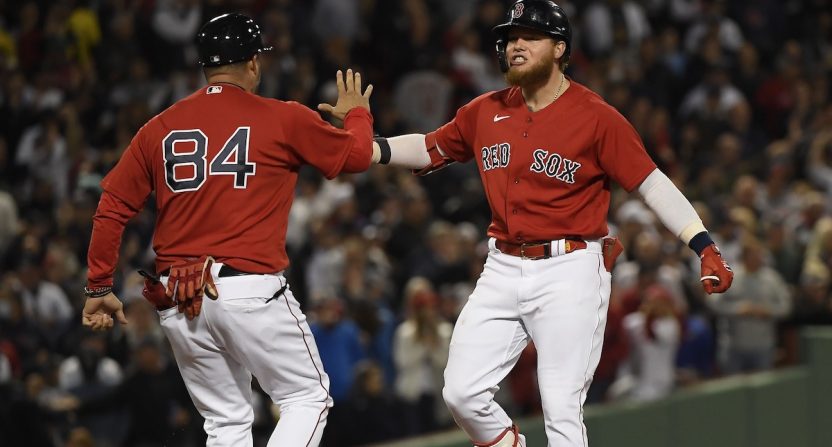 The Boston Red Sox did just enough to finish ahead of the New York Yankees for the top Wild Card playoff spot in the American League this season. That earned them a home game at Fenway Park for the one-game AL Wild Card playoff Tuesday night.

Yet the Red Sox didn’t exactly surge into the postseason, notching a 37-34 record during the season’s second half. Meanwhile, the Yankees went 46-24 after the All-Star break and appeared to be the stronger team going into the Wild Card game.

Those parachuting in for the MLB postseason might have assumed that the Yankees had the better chance to win with ace Gerrit Cole pitching. But Nathan Eovaldi showed that he couldn’t be overlooked, handcuffing the fearsome Yankees lineup in an eventual 6-2 win.

Boston will advance to play the Tampa Bay Rays in the AL Division Series, leaving the Yankees to retool — and possibly with a new manager if Aaron Boone isn’t brought back. Here are our big takeaways from the Red Sox’s big win:

Gerrit Cole took his slump into the postseason

The Yankees’ pitching ace starting the one-game Wild Card playoff appeared ideal. But those following closely know Cole has been struggling. In his final three regular-season starts, the right-hander allowed 15 runs and 24 hits in 17 2/3 innings. At Fenway Park this season, he compiled a 6.19 ERA in three appearances.

Those struggles continued Tuesday night. Cole wasn’t sharp, serving up a two-run homer to Xander Bogaerts in the first inning and a solo shot to Kyle Schwarber in the third. Kevin Plawecki nearly had another home run, blasting a long double to right field in the second inning. With the Yankees’ season on the line, Cole only lasted two innings, allowing three runs on four hits. He struck out three batters and walked Rafael Devers twice.

During the second half of 2021, Cole racked up a 4.14 ERA in 12 starts. He was still striking out batters, averaging 12.8 per nine innings. But Cole didn’t look like the same pitcher after MLB cracked down on sticky substances like Spider Tack. Is he still a $324 million ace and AL Cy Young Award candidate without getting extra help on his grip? Or do the Yankees have a problem?

Nathan Eovaldi continued his success versus the Yankees

Meanwhile, the Red Sox had their No. 1 arm on the mound as well. Eovaldi isn’t as acclaimed — or rich — as Cole, but according to FanGraphs’ WAR, he was the best pitcher in the American League this season. (He finished just ahead of Cole.) And he was strong against the Yankees during the regular season, managing a 3.71 ERA in six starts with 34 strikeouts and four walks in 34 innings.

In 7 #postseason appearances Nathan Eovaldi has a 1.63 ERA. pic.twitter.com/G4kAaIDNsa

That didn’t change in the postseason. Eovaldi allowed one run and four hits over 5 1/3 innings, striking out eight Yankees and walking none. But he began to look vulnerable in his third time through the Yankees lineup, giving up a home run to Anthony Rizzo and an infield single to Aaron Judge. That was enough for Red Sox manager Alex Cora, who pulled Eovaldi from the game before further damage could be suffered.

However, pitching into the sixth inning while holding the Yankees to one run was the effort Boston needed, working with a weaker bullpen.

Stanton had a fearsome second half of the season, slugging 20 home runs. And he hit well against Red Sox pitching this year, compiling a .266 average and .841 OPS with four homers. Three of those long balls and 10 RBI came in the Yankees’ late September series at Fenway Park, with Stanton batting .583 (7-for-12).

He and Aaron Judge figured to be two major reasons why the Yankees could win Tuesday night. Stanton did his best to oblige, crushing two balls deep to left field. But those drives ricocheted off the Green Monster instead of possibly leaving the ballpark, potentially costing the Yankees three runs.

Yankees try to be aggressive on the bases, but a perfect relay from Enrique Hernandez to Xander Bogaerts to Kevin Plawecki nails Aaron Judge at home 😮 pic.twitter.com/bLrDghLsY0

Stanton didn’t even drive in a run on his second deep drive, thanks to an outstanding relay from center fielder Kiké Hernández to Bogaerts at shortstop, who then threw out Judge at home plate. But hitting to right field instead worked out with a home run in the ninth inning that cut the Boston lead to 6-2. But it was too late and the Yankees needed a lot more.

The Green Monster may have bitten Phil Nevin, too

Speaking of that relay in the sixth inning, Judge was likely thrown out because of third-base coach Phil Nevin’s decision to send him home rather than hold him up. Once it was apparent that Stanton’s deep fly wasn’t leaving the park and Judge rounded second base, shouldn’t Nevin have figured that the carom off the wall would result in the ball getting to the infield more quickly?

Kevin Plawecki has the ball in his hand. not sure what Nevin was thinking. 2nd/3rd with one* out is a nice spot to be in pic.twitter.com/X0keqyP4Qh

In fairness, it took a perfect relay sequence to beat Judge by that much. But in watching the play, the ball got to Plawecki while Judge was still several steps from home. Even a slower relay probably would’ve resulted in an out. So instead of having runners on second and third with one out, setting up a potentially big inning, the Yankees got no runs after Anthony Rizzo’s home run earlier in the inning.

Boston fans will never say “Mookie who?” Mookie Betts won an AL MVP in 2018 and finished as a runner-up in 2016 and 2020 while wearing a Red Sox uniform. It’s painful to see him continue to be one of the best players in baseball for the Los Angeles Dodgers now.

Alex Verdugo, the one current major leaguer that Boston received in return for Betts has the pressure of trying to match that production and win the hearts of Red Sox fans. That might be impossible. And if Jeter Downs and Connor Wong develop into impact players, that trade will have worked out for Boston.

Verdugo does it again! pic.twitter.com/4jR15IdQVa

But Verdugo did just fine in the AL Wild Card game, batting 2-for-4 with three RBI. His double in the sixth inning scored Bogaerts, pushing the Red Sox lead to 4-1. And in the seventh, Verdugo put the game out of reach with a two-run single off Yankees reliever Chad Green.

#WonTheTrade? Nope. Probably not ever. But Verdugo did just fine on Tuesday, making a difference in a do-or-die postseason game.