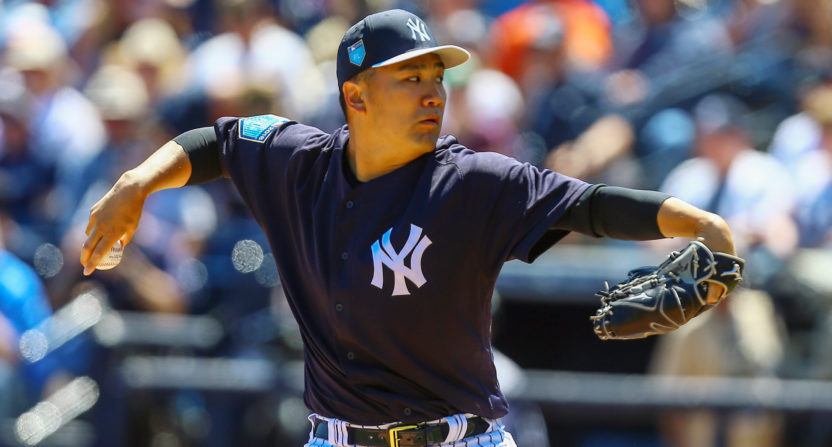 Though we can’t know for sure whose bad seasons are aberrations and whose are something more, looking beyond superficial statistics can often provide us with hints. That’s the idea behind this column, which will identify six players who, for one reason or another, seem bound to perform better in 2018 than they did in 2017.

We did this exercise last year and hit on five of our six picks (curse you, Jason Heyward), which means either we got lucky, or we’re worth listening to. So without further ado, our projected breakout/bounce-back candidates for the upcoming season:

When projecting a pitcher’s future performance, it’s generally more useful to look at his FIP (which is calculated using only strikeout rate, walk rate and home-run rate) than his ERA (which is subjected to the whims of batted-ball luck). Well, whereas Chris Archer’s 4.07 ERA in 2017 suggested something like a league-average starter, his 3.40 FIP placed him 11th in all of baseball among qualified starters.

Archer struck out batters at the highest rate of his career last year and walked them at the lowest rate of his career, meaning most of the damage against him came on batted balls. The Rays’ defense won’t be world-class next year, but nor will it be terrible, at least as long as Kevin Kiermaier patrols centerfield. That means the gap between Archer’s ERA and FIP (third biggest in baseball) won’t likely repeat.

Every year, fans and analysts promise that Maikel Franco is poised for a breakout, and every year Franco under-performs. But before you give up on the 25-year-old third basemen, consider this: He posted the fourth lowest batting average on balls in play in all of baseball last year, well below his career figure, which strongly suggests that he was a victim of poor luck. Meanwhile, in a year when most hitters saw their power numbers soar, Franco’s home run/fly ball rate hit a career low, another indicator of bad breaks.

Look beyond Franco’s underwhelming superficial stats (.230/.281/.409) and you find a guy who struck out less often in 2017 than he had previously, without sacrificing much pop. It’s probably not wise at this point to project Franco as a future superstar or even an All-Star, but he looks like a lock to improve upon last season’s deep disappointment.

FanGraphs keeps a statistic called hard-hit rate, which measures exactly what you’d think: the rate at which a player hits the ball hard. In 2017, the metric’s leaderboard featured hulking sluggers like Joey Gallo, Aaron Judge, Paul Goldschmidt… and also, in seventh place among all batters, Miguel Cabrera.

So what went wrong in 2017? Well a career-low BABIP sure didn’t help. Cabrera won’t win another MVP, but once that BABIP normalizes, the 34-year-old is a sure bet to bounce back from last year’s campaign.

No pitcher in baseball allowed more home runs per fly ball last season than Masahiro Tanaka, whose 21.2 percent rate was easily the highest of his career. Neutralize that number to league average and Tanaka was the 13th best qualified starter in baseball last year.

Obviously Tanaka bears some amount of the blame for how often the ball cleared the fence against him, but it’s overwhelmingly likely that his HR/FB rate comes back down in 2018. That should be enough to bring his ERA back under 4.00 and make him a useful starting pitcher once again.

It feels almost too obvious to include Manny Machado on this list, but we would be remiss to ignore him. The three-time All-Star posted the worst year of his career in 2017, with a highly disappointing .259/.310/.471 slash line that made him a good player but not the superstar he had been previously. Now, both advanced stats and common sense point to a likely bounce-back.

We’ll start with the stats. Machado’s .265 BABIP last year was by far his lowest ever, suggesting that he suffered from some bad luck. That figure is particularly striking when you consider that he ranked ninth in baseball in exit velocity (minimum 200 batted-ball events) and set a career high in hard-hit rate.

Now for the common sense. Machado is a 25-year-old stud who has been putting up All-Star numbers for most of this decade. He had a tough year, but there’s no way in hell that will last.

Roberto Osuna wasn’t awful in 2017, but a 3.38 ERA and 10 blown saves constituted a disappointment for a guy widely pegged as one of the game’s next great closers.

But beneath those superficial numbers, Osuna pitched like a true lockdown reliever. He struck out batters at a career-high rate (33.3 percent) while walking them at a career-low rate (3.6 percent). As a result, his FIP stood at a sparkling 1.74

Osuna is unlikely to allow a .285 BABIP again, especially now that Randall Grichuk has replaced Jose Bautista in the Blue Jays’ outfield. He could emerge as a top closer in 2018.