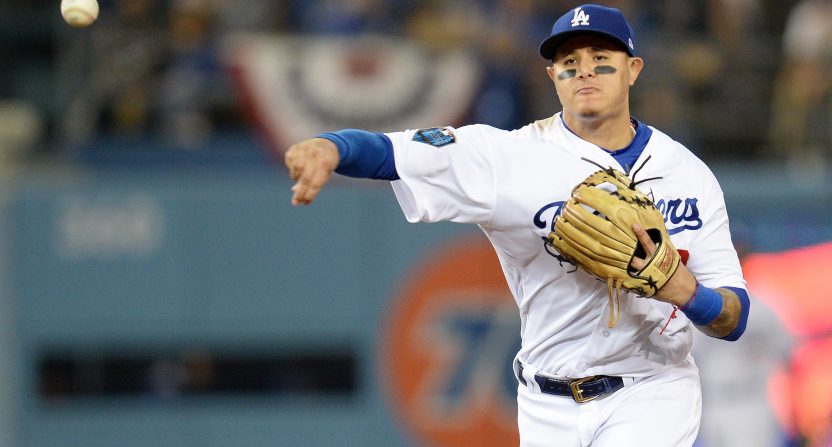 Manny Machado probably didn’t make the greatest impression on some teams with how honest he was ahead of free agency in the last year, and his insistence on playing shortstop over third base/doing whatever to help a team win was likely a bit of a turn-off as well (though he’s cooled a bit on that talk, and would probably be fine playing anywhere on the diamond if he gets blown away with an offer). He was also called out as a “dirty” player while playing for the Los Angeles Dodgers in the World Series.

Well, The Athletic’s Ken Rosenthal reports that the Philadelphia Phillies, Chicago White Sox, and New York Yankees are for sure interested in signing the free agent, and hears from an MLB executive that “at least three other teams are in the mix.”

It’s not just the #Phillies, #WhiteSox and #Yankees that have interest in Manny Machado. One rival executive hears at least three other teams are in the mix and will meet with Machado’s agent, Dan Lozano, at the winter meetings.

If it’s only six teams, or even if it’s only seven, eight, nine teams, that’s still not nearly enough.

Machado is 26 years old. Twenty. Six. Bryce Harper is also only 26. Talents like this hitting the free agent market only happens every few years, and talents like this at the age of *26* rarely happens. There’s also a good chance that Machado and Harper opt out within a few seasons, in which case they’re not going to be the 10+ year commitments their contracts will say.

But these excuses are really just poor excuses (and literally represents rich owners acting “poor”) when it comes to having the chance to sign Machado or Harper, and fans should roll their eyes at teams not at the very least inquiring.

There are 29 teams that would get substantially better with Machado and there could be up to six interested! https://t.co/e62ZwpQL87

Literally every team could very much use Machado, and again, he’s only 26. This cannot be stated enough.

Is your organization bad right now? Okay, well, you need talent to accelerate that rebuild, and Machado should still have many good years left by the time the team is ready to win. Machado has been a 6+ WAR player (by both Baseball Reference and FanGraphs) three times already. He’s coming off a .905 OPS, 141 wRC+ season. He’s an elite hitter that plays passable defense at a premium position in shortstop, and great defense at third base. Even if his range slips as he ages, he should be able to be a very good defensive third baseman for a long time.

This is why the White Sox, for example, are wise to be all-in on Machado right now, even if their team is still another year or two away from contention on paper. He truly fits every single team’s roster and long term plan, regardless of whether or not they’re ready to win now.

There’s also the fact that an addition like this energizes an organization and fan base. This puts butts in the seats, draws interest, sells jerseys at the team store, etc. There is a ton of value in things besides just the 6-WAR he’s going to add to the team. Odds are that Machado (and Harper) brings back a pretty good return on the $300+ million investment, even if that number appears terrifying on the surface.

And for organizations ready to win now? There’s especially no great excuse for most of them to not be doing everything possible to add a Machado or Harper to the team.

There’s surely a “Mystery Team” or two that will join the discussions, and maybe missing out on Harper or another player(s) via free agency and trades will motivate more organizations to jump into “the mix.” But it’s absurd that only six teams would be serious about trying to add Machado as we enter the Winter Meetings.