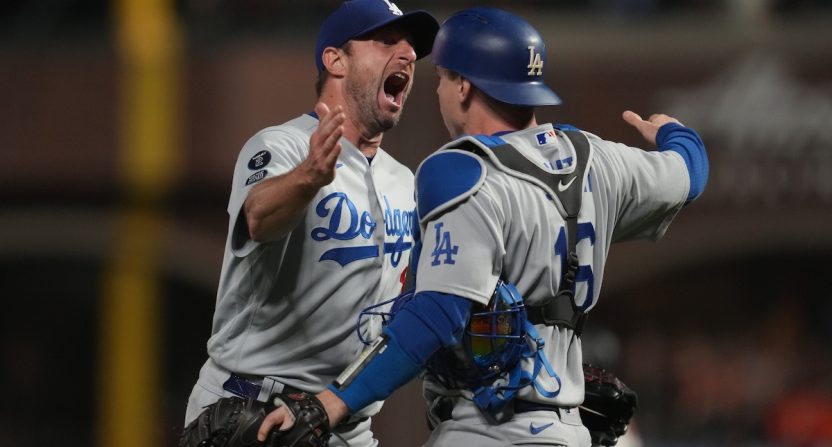 A win-or-go-home decisive Game 5 of the National League Division Series lived up to the intense rivalry between the Los Angeles Dodgers and San Francisco Giants. The Giants appeared to have the advantage playing at home and with Logan Webb on the mound, but Julio Urias and a deep Dodgers bullpen provided a strong chance to win.

With a 2-1 victory, the Dodgers advance to the NL Championship Series to face the Atlanta Braves. But it was a tough path for Los Angeles, which was to be expected against the NL West champion Giants and their 107 regular-season victories. Here are our main takeaways from an exciting Game 5:

Cody Bellinger had a bad season? About that…

The 2019 NL MVP had a stunningly poor 2021 season. His triple-slash average was .165/.240/.302, resulting in an -0.8 WAR (according to FanGraphs). Bellinger won’t completely erase that performance. though he’s batting 5-for-17 in the postseason. More importantly, he came through with Game 5’s biggest hit.

Cody Bellinger? CODY BELLINGER gives the Dodgers the lead in the ninth! pic.twitter.com/0UfpzCBUZi

Camilo Doval made perhaps the game’s biggest mistake, hitting Justin Turner with his first pitch to lead off the ninth inning. Gavin Lux followed with a single to move Turner to second base. Then Bellinger drove him in — behind on a one ball, two strikes count — smacking a slider into right field for what turned out to be the game-winning run.

Strike three? Are you sure?

It’s the call that will be discussed throughout the fall and winter in San Francisco. Maybe into the spring as well. Did Wilmer Flores check his swing or did his bat go around?

Max Scherzer got ahead of Flores with a no-ball, two-count in the ninth and threw a slider that darted down and away from the right-handed batter. Flores started his swing, but appeared to keep his bat back. He certainly thought so, standing back to wait for the next pitch.

Did Wilmer Flores go around for strike three? You make the call 🤨 pic.twitter.com/XjWjCihZRV

But home plate umpire Doug Eddings appealed to Gabe Morales at first base, who said that Flores swung at the pitch. Look at the reaction from Giants first-base coach Antoan Richardson. He couldn’t believe it. Ending a postseason game, ending a team’s season, on that call? Wow. 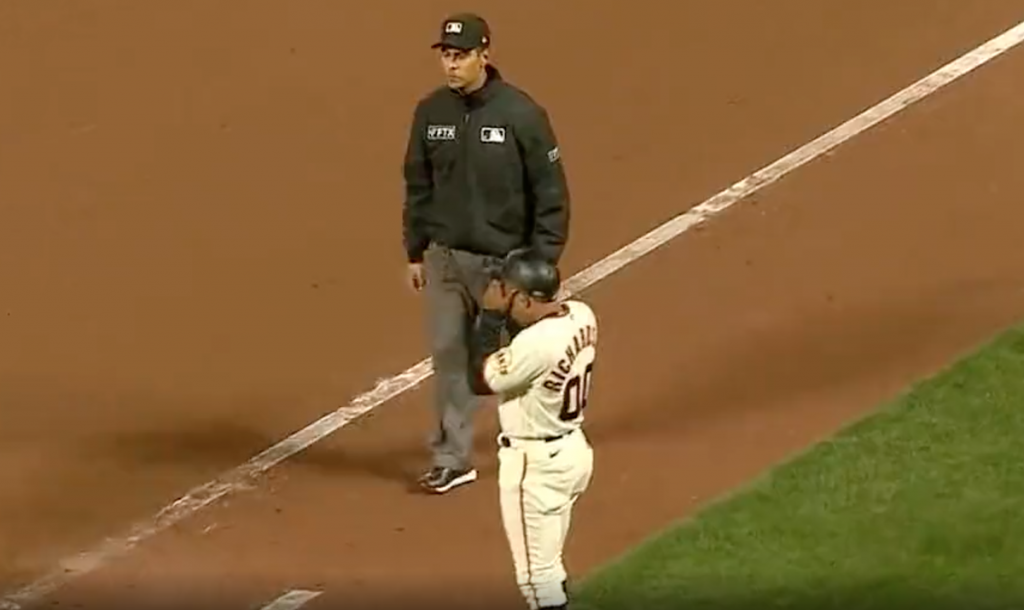 UPDATE: Plenty of Dodgers fans pointed out afterward that the strikeout call on Flores was karmic justice for a check-swing call on Darin Ruf when the teams played in late July. The Giants eventually won that game, 5-3, a result that may have cost the Dodgers the NL West title.

Umpire says no swing, which allows the Giants to tie the game and Dodgers manager Dave Roberts gets ejected immediately pic.twitter.com/HtDblfZFwg

The Dodgers raised eyebrows Thursday afternoon with the announcement that reliever Corey Knebel would start Game 5, rather than Julio Urias.

Urias would still pitch in the game but by starting Knebel, Dodgers manager Dave Roberts forced his Giants counterpart, Gabe Kapler, to start Tommy La Stella at second base and Mike Yastrzemski in right field. That made both left-handed bats unavailable later in the game when Roberts brought in Urias for the third inning. Would they have made a difference against Blake Treinen, Kenley Jansen, and Scherzer out of the Dodgers’ bullpen?

Brusdar Graterol followed Knebel to pitch the second inning. The two relievers combined to allow no runs on three hits, adding two strikeouts and no walks. The two shutout innings were particularly important since the Dodgers once again had no answer for San Francisco’s starting pitcher.

The third-year right-hander dominated the Dodgers in Game 1 of this series, throwing 7 2/3 scoreless innings with 10 strikeouts and no walks. Webb was nearly as good in Game 5, with his team’s season at stake, pitching seven innings with seven strikeouts and one walk.

This time, however, the Dodgers did break through for a run. With one out in the sixth, Mookie Betts hit a single and then stole second base. That put him in position to score on a double from Corey Seager, giving the Dodgers the first run of the game. Getting on the board first may have been crucial when both teams were pitching so well.

But San Francisco didn’t deflate after falling behind 1-0. For some teams, that may have happened, knowing that runs would be difficult to come by in a decisive postseason game. But the Giants didn’t flinch all season long. Close games didn’t scare them.

WE. ARE. TIED IN SAN FRANCISCO. Giants come right back with a solo homer by Darin Ruf! 💪 pic.twitter.com/6KAqk045Cp

And when the Dodgers landed the first solid blow, the Giants came right back. Ruf led off the bottom of the sixth and blasted a 428-foot home run to straight center field, tying the score at 1-1.

No one makes a bigger impact in the Dodgers lineup than their right fielder. Betts just makes things happen, getting base hits, and creating offense on the basepaths. He batted 4-for-4 in Game 5 and his stolen base in the sixth inning led to the Dodgers’ first run of the game, taking a 1-0 lead.

Dodgers finally break through against Logan Webb. And we have a run in Game 5. 1-0 in the 6th ⚾️ pic.twitter.com/BvWwxx8BEn

Seriously, if the Dodgers had lost this game by a run, this decision by Roberts would’ve lived in infamy. Los Angeles had runners on first and third with one out. Chris Taylor is batting .188 in the postseason (going 0-for-4 in Game 5), but hit two balls hard in the third and eighth innings. A deep fly could have scored a run.

Instead, Roberts called for a bunt and Taylor popped out to first base, possibly blowing a chance to extend a 2-1 lead. Fortunately, Scherzer held that lead. But he — and Dodgers fans — probably would’ve appreciated at least one more run.

Game 1 of the National League Championship Series is scheduled for Saturday (Oct. 16) at 8 p.m. ET from Atlanta’s Truist Park. Roberts said Scherzer is expected to start for the Dodgers. The Braves haven’t yet announced their starter, but will likely choose between Charlie Morton and Max Fried.