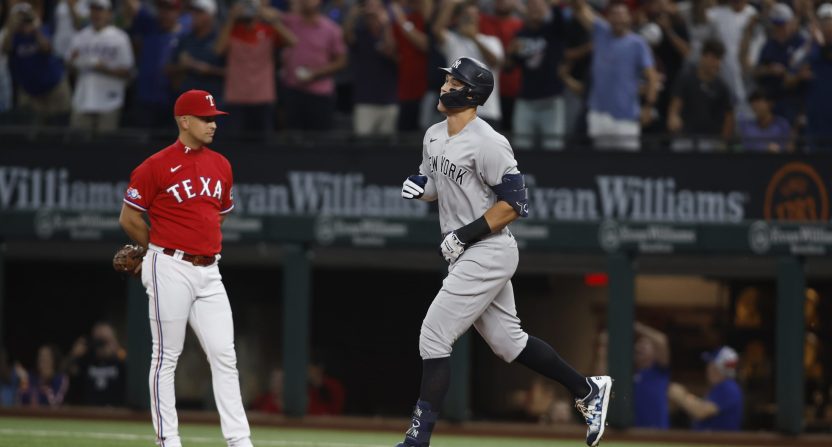 New York Yankees superstar Aaron Judge set the American League single-season record with his 62nd home run of the season to lead off Tuesday night’s game against the Texas Rangers.

The Judge 62nd home run ball has a value of at least $2 million; one person already made that offer for the ball known in recent weeks.

And the opportunity to acquire a life-changing item led to one fan in attendance at Globe Life Field making a very dangerous effort for the ball, only to end up nowhere close to where it landed.

A fan chose to leap over the railing just beyond the left field wall, but the ball landed in the stands many seats to the fan’s left. The assumption is that the fan hoped the ball would fall into the area below the stands.

Bold strategy from this fan absolutely sending it off the wall for the Aaron Judge ball that landed about 10 seats away pic.twitter.com/PF34Qg1hb0

Guy who jumped the rail, I guess to try and grab ball if it didn't make it to the stands. pic.twitter.com/s7entJaHdJ

But Evan Grant of the Dallas Morning News reports that the fan did not suffer any injuries. The fan was escorted out of the stadium for jumping the railing, though.

Guy did not incur injuries, but was escorted out of park for trying to jump fence. https://t.co/3Q7WZQ1n6E

While that fan was lucky to not suffer injuries, one Rangers fan was lucky to come away with the baseball. While being escorted out of the stadium by security, Cory Youmans told the media that he “hasn’t thought about it” regarding his plans for the ball.