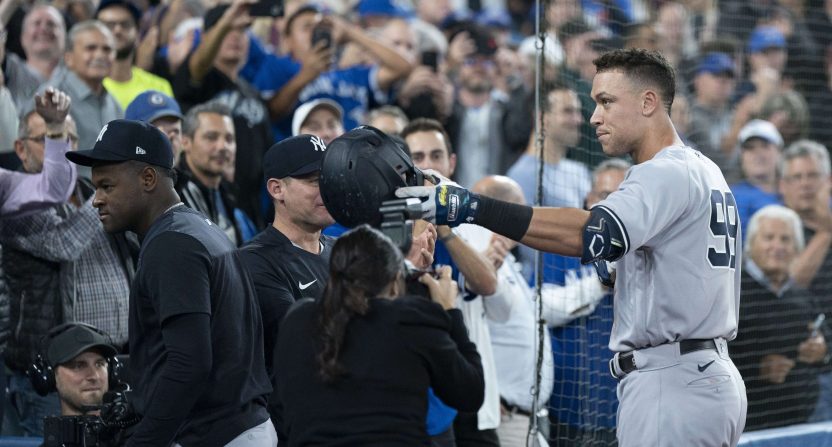 Last weekend, ESPN rankled a lot of college football fans when they kept interrupting the Clemson–Wake Forest game to show Aaron Judge’s at-bats as he chased his 61st home run. Despite lots of criticism and annoyance, they’ll be back at it this weekend.

The New York Post’s Andrew Marchand reported Thursday that ESPN will be cutting all weekend long as Judge goes for his 62nd home run of the season, which would set the new franchise and American League record.

All three Yankee games this weekend will also be on MLBN outside of the YES footprint.

ESPN will also have cut ins.

Good job by MLB, basically making Aaron Judge's potential 62nd homer available as many places as it can. https://t.co/6Zd15BuABe

Judge hit his 61st home run of the season on Wednesday night, tying Roger Maris for the all-time Yankees record. It’s a notable achievement. But is it deserving of the constant cut-ins when he remains well off the Major League Baseball single-season mark? A lot of sports fans seem to feel that way, especially when they could easily tune in to watch the Yankees game if they wanted to.

Given that these cut-ins will interrupt college football games involving schools halfway across the country, it’s hard for many to understand why ESPN thinks they’d prefer to see Judge pop out to left field than just enjoy the game they chose to watch in the first place.

what if i tune in to watch football and don't want to watch baseball https://t.co/Hyg5kIEPXu

If I miss one single second of any college football game because some brodio wants to hit a ball far when he isn't even the person who hit the ball far the most times I will lose whatever is left of my mind https://t.co/1bjhobxJQU

As a man who loves College Football and MLB: No one asked for this https://t.co/5ZzraGBxDT

Perhaps ESPN has the data to back up this decision, but it sure seems like they’re just going out of their way to annoy people who don’t really care about the New York Yankees.