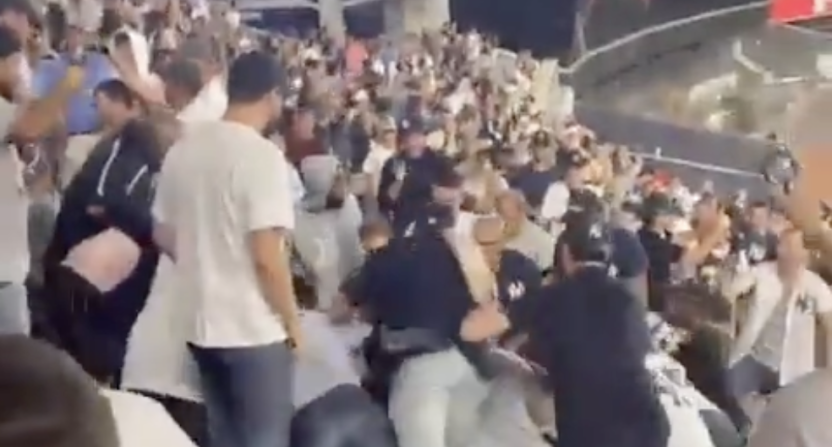 When a ball goes into the stands during a Major League Baseball game, it’s common for fans to rush from their seats to grab it, and sometimes even battle other fans for it. But the scene when New York Yankees slugger Aaron Judge hit his 60th home run earlier this week took that to the absolute extreme.

On Tuesday night, Judge slugged the 60th home run of the 2022 MLB season, tying him with Babe Ruth for second all-time on the American League single-season home run leaderboard, just one behind former New York Yankees slugger Roger Maris who has the most of any American League hitter all-time with 61.

It was a moment of celebration for most Yankees fans, but when the ball reached the left-field stands, it became a moment of absolute chaos for those in attendance scrambling to catch the home run ball.

A video shared on Twitter shows the insane scene:

Here’s the dog pile of people fighting for it pic.twitter.com/C2y8zWf4Rx

The wild scene understandably caused quite a stir in the MLB world with many imagining the chaos when Judge hits his 62nd home run of the season, or when Albert Pujols hits the 700th home run of his career.

The dog pile for Judge’s 60th

Just imagine what the next two homers are gonna look like pic.twitter.com/nbHHQD90VE

If this is the pile for Judge’s 60th, I’m nervous to see what happens when Pujols hits #700 #stlcards pic.twitter.com/bOJQbGDxWP

Last time we checked: Aaron Judge was 17 when the Yankees last won a World Series pic.twitter.com/Xl3uCAYX57

Incredible video here. The Yankees fan who caught Aaron Judge's 60th home run explains that he immediately "bear hugged" the ball and looked for security because "I feared for my life. I didn’t want to get trampled or anything."

The man who fought that crowd and caught the ball at the bottom of the pile said he “feared for his life.” Remarkably, he ultimately decided to give the ball back to Judge, asking for nearly nothing in return.