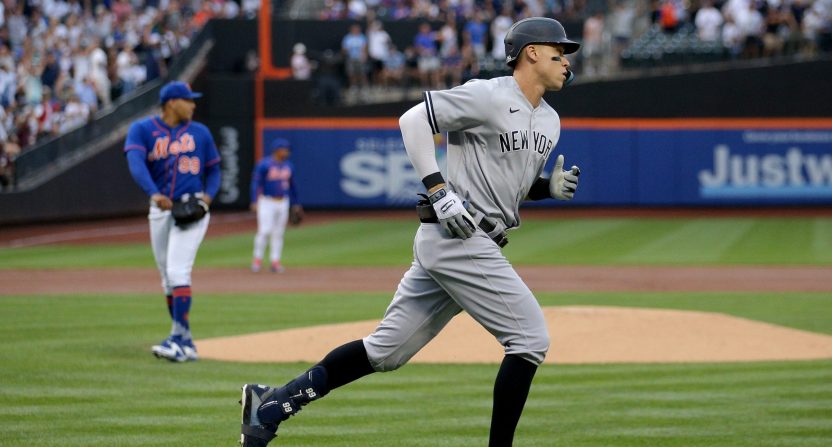 The pursuit of Aaron Judge is now under major scrutiny.

Controversy has stirred up around the superstar outfielder and it surrounded his potential former home. The New York Mets and New York Yankees could be in trouble.

A report from The Athletic has the Mets and Yankees under fire for possible improper communication. Ken Rosenthal reported first that the MLBPA could investigate the teams and whether they violated the MLB CBA.

The story surrounded an article written on the SNY website. The article read, “Owners Steve Cohen and Hal Steinbrenner enjoy a mutually respectful relationship, and do not expect to upend that with a high-profile bidding war.”

That statement reportedly drew red flags from the MLBPA, according to Rosenthal. The union will investigate the situation and whether Cohen and Steinbrenner had communicated – or more harshly, colluded – with each other about offseason intentions well before free agency began.

Also implicated in the report is Houston Astros owner Jim Crane. Crane, in the news lately, was mentioned as a person of interest in the report. Rosenthal wrote, “As reported by MLB.com, ‘Crane said Verlander is seeking a deal similar to Max Scherzer, who signed a three-year, $130 million contract with the Mets a year ago.’ The CBA states that neither players nor clubs, ‘can make comments to the media about the value of an unsigned free agent, regardless of whether discussions have occurred.'”

Judge and his upcoming contract have been a major storyline all year. The Yankees had every opportunity to sign him to an extension before the season. But they balked, so Judge proceeded to have an all-time great season.

The MLB world reacted to the report late Wednesday night into Thursday.

Man has to be so defeating for the players to fight as hard as they do for these things… to put specific examples of what owners can’t say and then almost immediately owners say exactly that thing https://t.co/e1XTMTsUed pic.twitter.com/Mx7wCSPTmX

an article on the SNY site, partially owned by the Wilpons, being the thing that caught their attention is just… https://t.co/CmPtZEVW8D pic.twitter.com/HcS9qqYbrO

Move along. Nothing to see here. Nothing at all. https://t.co/kMavMJWpuZ

Had this covered last winter

Knew something was up when the Red Sox and Yankees failed to lockdown Bogaerts and Judge@BostonHerald Link: https://t.co/0mHxvrz0sx https://t.co/pPLIpMggAZ pic.twitter.com/Fx8sa64Y8r

"MLB finds Hal Steinbrenner and Steve Cohen did nothing wrong, and this is all Aaron Judge's fault." https://t.co/Y4HEUx0ooI