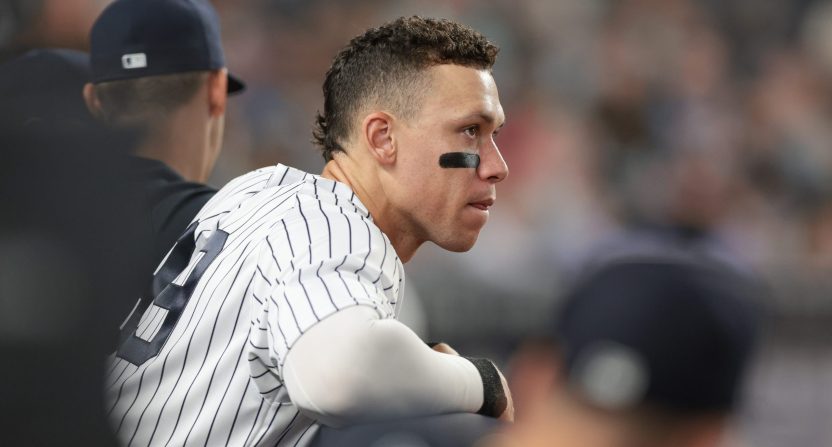 Here’s a sentence no one could have predicted they’d see this October: Yankee Stadium fans booed Aaron Judge in the ALDS.

The New York Yankees superstar’s bad ALDS got even worse Friday as New York fell to the Cleveland Guardians, 4-2, in 10 innings.

Judge struck out four times in five at-bats, and he’s now hitless in eight at-bats in the series. He’s struck out seven times. The man who made Yankees history in a good way just a few days ago is setting the wrong kind of records now.

New York Yankees with 7+ strikeouts and 0 hits in back-to-back playoff games? Yeah, Aaron Judge is the first ever. pic.twitter.com/iN0OM1hhiK

Hence the boos at Yankee Stadium.

Following his 4th strikeout of the day, 7th in the ALDS, Yankee fans boo Aaron Judge 😬

Judge heard the boo-birds. A reporter asked him after the game if it surprised him.

“Not at all. It happens. … It’s happened many times through my career here,” Judge said.

Aaron Judge speaks on hearing boos from the crowd

To his credit, Judge addressed his bad play, and the boos, head on.

“There’s nothing I can do. I gotta play better, that’s what it comes down to,” he said. “I didn’t do the job tonight, especially as the lead-off hitter, I gotta get on base. I gotta make something happen on the basepath, I didn’t do that tonight.”

Baseball fans turned to Twitter to debate the issue, with the general sentiment being the Yankees slugger doesn’t deserve the boos, no matter how much he’s struggled the past two games.

I heard Yankee fans boo'ing Aaron Judge after that strikeout.

Listen, I hate the Yankees…but boo'ing a guy who hit 62 homers this year is WILD.

yankees fans that boo’d aaron judge today are pathetic. that dude is the entire reason you’re in the postseason and had one of the most historic seasons of all time

If you boo Aaron Judge you don't deserve to wear Yankee gear. Get out of the stadium

So now yankee fans are going to boo Aaron judge? What the hell is that? It's October people, you don't see mediocre pitching when it comes to the playoffs. How about giving some credit to the guardians for how they've pitched him.

It’s an absolute joke that the Yankee fans are boo’ing Aaron Judge bc he struck out. Wow

They might as well do live cut-ins during all of Aaron Judge's playoff at-bats. Show General Hospital or something for three minutes.