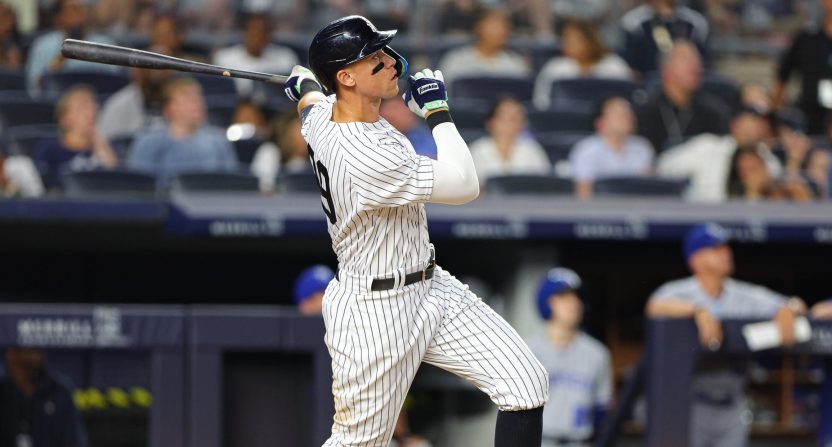 Various oddsmakers give the Yankees anywhere from a 40% to 83% chance of signing Judge to a deal that could approach $400 million.

If you checked the weather forecast in the morning and saw a 40% to 83% chance of rain, you would probably take an umbrella before venturing out. You probably wouldn’t plan a picnic. But sometimes, it doesn’t rain under those circumstances.

In other words, everyone’s forecast that Judge will sign with the Yankees could be wrong.

The New York Post’s Jon Heyman reported Thursday that “there appears to be some real concern within the Yankees’ ranks about their chances to keep Judge. The Yankees expect to be the high bidder — figure they’ll start just north of his original ask of $36 million a year. They just aren’t sure how badly he wants to stay.”

Heyman also noted it’s not about potential competition from teams such as the Los Angeles Dodgers and San Francisco Giants, “it’s just a feeling, and maybe trepidation. While Judge has suggested in the past he’d love to be a ‘lifetime Yankee,’ it might also be the silence since.”

Heyman, who is fairly well plugged into the organization, cites one issue in particular that might concern Judge. He was not pleased with the Yankees’ initial negotiations before the season, when they reportedly offered him $30.5 million per year.

In addition to the Dodgers and Giants, the New York Mets and Chicago Cubs have also been mentioned as possible destinations for Judge.

Still, the smart money is on the Yankees keeping their franchise player. Despite Heyman’s report suggesting there’s some doubt about Judge’s future in New York, just last month, he estimated there was an 83% chance Judge would remain a Yankee. That sounds almost like a done deal.