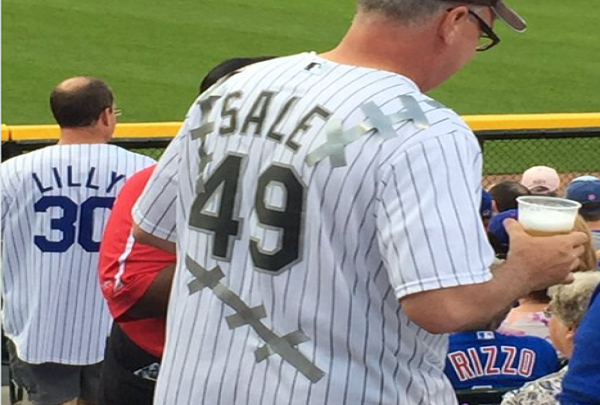 One of the more curious and embarrassing episodes during Chris Sale’s final season with the Chicago White Sox this year was the July incident during which the left-hander was sent home and suspended for taking issue with the 1976 throwback jerseys that the team was forcing players to wear.

Actually, Sale did more than show some displeasure, believing that White Sox management was favoring marketing over team performance. In order to make sure that he and his teammates wouldn’t have to wear the uniforms that he considered uncomfortable, Sale cut up the throwback jerseys so that they couldn’t be used on the field.

At the time, it was believed that Sale destroyed all of the throwback jerseys made for the White Sox’s July 23 game. But at least one apparently survived. Former teammate Adam Eaton — now with the Washington Nationals, after being traded last week — told CSN Chicago’s Chuck Garfien that he tucked his throwback jersey away before Sale could get to it during his clubhouse tirade.

“I think I may have the only one that didn’t get cut up. I secretly yanked mine down when he wasn’t looking, and as of right now I think – besides the coaches; the coaches are one thing – but I want to know for sure that I’m the only player that didn’t get his cut up.”

Lest anyone think that Eaton didn’t have the genuine article — though he has no reason to make up such a story, especially since his name and number are presumably on the back — he said that his throwback jersey was authenticated and is currently being kept in his basement. Eaton would like to get the jersey signed by Sale, who hopefully has a sense of humor about the entire matter now.

One problem that might prevent Eaton from meeting up with Sale during the season: The Nationals don’t play the Boston Red Sox, to whom Sale was traded last week, next season. Had Eaton stayed with the White Sox, Chicago plays Boston next May 29-31. Other arrangements will now have to be made. Perhaps that’s a meeting that can take place during the offseason. Or if the Red Sox and Nats were to play in next year’s World Series, this would make for an amusing side story.