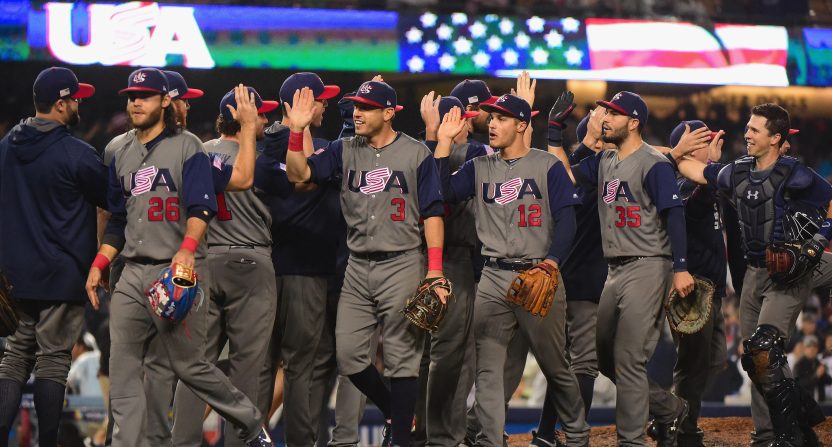 The weather conditions were less than ideal, but the United States would take a win in a blizzard on top of a mountain if it had to. Team USA, which had yet to finish higher than fourth place in a World Baseball Classic, clinched a spot in this year’s championship game with a 2-1 victory over two-time champion Japan Tuesday night in Los Angeles.

After three scoreless innings in a light and misty rain in Dodger Stadium, the United States struck first in the top of the fourth inning by taking advantage of an error by Japan. Christian Yelich reached on a fielding error by second baseman Ryosuke Kikuchi. The throwing error allowed Yelich to reach second base with one out, and the United States was in business. With two outs, Eric Hosmer drew a walk on a full count, and Andrew McCutchen singled into left field to drive home Yelich for the first run of the game and a 1-0 lead.

.@TheCUTCH22 broke the scoreless tie with this clutch RBI knock in the 4th. https://t.co/DU1Slkk1d1 #WBC2017 pic.twitter.com/6RYkdiOmg0

The United States held on to the one-run lead into the sixth inning until Kikuchi made up for his previous error with authority. Kikuchi took a fastball from Nate Jones to deep center field, just out of the reach of McCutchen for a game-tying solo home run. That led to a pitching change for the USA, with Jim Leyland replacing Jones with Andrew Miller.

Ryosuke Kikuchi gave it to them. #WBC2017 pic.twitter.com/dro4Vx08D1

To the eighth inning this one went, tied 1-1. Brandon Crawford singled with one out to give the USA a base runner for just the second time since taking the 1-0 lead a few innings earlier. Ian Kinsler followed with a deep ball to the gap in left-center that came oh-so-close to clearing the wall for a two-run shot. Instead, Crawford hustled his way into third base and was held there in the soggy conditions. Had it not been raining, he very well might have been sent home and possibly thrown out at the plate.

Perhaps the rain was a blessing, because Crawford raced his way home on an infield grounder off the bat of Adam Jones. Third baseman Sho Nakata couldn’t get a good grip on the ball and Crawford crossed the plate to regain a one-run lead for Team USA, 2-1.

.@SimplyAJ10 has been in the middle of the action for Team USA all #WBC2017 long. pic.twitter.com/RvFQelWs8x

That would prove to be the game-winning run. Pat Neshek came in out of the bullpen in the eighth inning to get the USA out of a late-inning jam, and Luke Gregerson pitched a clean ninth inning to lock down the historic win for the USA.

Here’s the final out:

"Tonight, it's the United States moving on to the Finals!"#MLBTonight breaks down @USABaseball's big win right now pic.twitter.com/QUUG3Y18LD

Next up for the USA will be a championship bout with Puerto Rico on Wednesday night in Dodger Stadium. The United States will be playing on back-to-back days, while Puerto Rico will be coming off an off day after playing Monday. The managers are also restricted on who they can use on the mound due to WBC rules to protect pitchers in Major League Baseball. How Jim Leyland handles his pitching staff will be key.

While this is the first trip to the championship game for the United States, this will be the second straight WBC that sees Puerto Rico play for the trophy. Puerto Rico was shutout by the Dominican Republic in the 2013 title game. That loss gave Puerto Rico the only medal it has claimed in the World Baseball Classic, but that’s still one more than the United States has to show off. So the pressure is on to finish the job and take the top prize international baseball has to offer.

Winning the World Baseball Classic would give USA Baseball a nice little boost on the international stage. As far as international competition goes, the United States has tended to lag behind the competition in the medal count. The USA took the gold medal at the 2000 Olympics in Sydney but has managed just two bronze medals at the Olympics since 1992 and has finished no higher than fourth in the World Baseball Classic since its introduction (in 2006) until this year.

USA. Puerto Rico. Let’s do this.