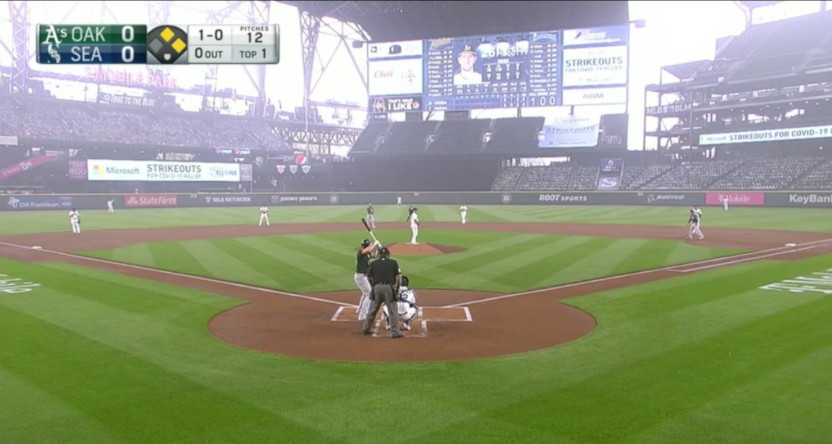 On Monday, the Seattle Mariners made the decision to go ahead with a home doubleheader against the Oakland A’s despite an Air Quality Index number well above 200 (anything in the 200-300 range is “very unhealthy“) from wildfires, and despite local officials’ advice that “everyone should stay indoors” and “avoid all strenuous activity.” On Tuesday, though, the Mariners’ planned home games against the San Francisco Giants Tuesday and Wednesday were postponed, with the plan apparently being to send both teams to San Francisco (which has its own air quality issues from the fires, but is expected to be slightly better by Wednesday) and play Wednesday and/or Thursday. Here’s more on that from Alex Pavlovic of NBC Sports Bay Area:

The trip to Seattle will be a short one for the Giants. Per a source, the Giants were preparing to fly back to San Francisco on Tuesday night because of the poor air quality in Seattle instead of playing their scheduled game against the Mariners.T

The Giants and Mariners were supposed to play a two-game series, but now likely will move those games to Oracle Park. The Giants were preparing to fly Tuesday evening, so the games will either be played as a doubleheader Wednesday or on Wednesday and then Thursday, when both teams are off.

Because of fires in the Northwest, the AQI has been above 200 this week and fluctuated throughout the day Tuesday. As of about 2 p.m., it was about 212 in downtown Seattle. It is considered unsafe to be outside, although the A’s and Mariners played two games Monday. Afterward, A’s players complained about the hazardous conditions.

It’s interesting to ponder if those A’s complaints had anything to do with this decision. Pitcher Jesús Luzardo, who threw 4 and two-thirds innings in the first game Monday (and left with a no-decision), went in on this after the game:

Jesús Luzardo on the air quality: "When I came out it was at 284. I'm a healthy 22 year old I shouldn't be gasping for air, or missing oxygen when I'm getting to the line. I'll leave it at that."

Melvin said topic of whether to play amid air quality conditions was not brought up to the A's: "No one said a word. I heard 200 was the cutoff level to start and my understanding is it was way over that, both games."

Here’s some of what those games Monday looked like:

Part of what’s strange about this is that there’s seemingly no standard relayed to the public on what air quality level MLB and its teams will accept. As per the Environmental Protection Agency’s AirNow site, Seattle had an AQ number of 241 as of 1 p.m. local (4 p.m. Eastern) Tuesday. That’s obviously bad, and above the 200 the NFL uses as a cutoff and the 200 Melvin mentioned, but it’s lower than the 284 Lazardo said he faced when he went out there. And MLB and its teams are staying mum on how they make these decisions, as per Alex Shultz of SF Gate:

The widespread wildfires on the West Coast and the ongoing climate crisis haven’t compelled the MLB to establish an AQI threshold of its own. An MLB spokesperson previously told SFGATE the league instead defers to teams to communicate with local health officials and make their own decisions. In August, when SFGATE contacted the A’s and San Francisco Giants about their individual AQI protocols, both teams declined to answer our questions with any specifics.

So the Mariners could play Monday despite bad air, but not Tuesday. And now their Tuesday and Wednesday games have been relocated to another city entirely. Oh, and this is likely to be a continued issue for MLB, as more West Coast fires are expected in the coming months, and MLB is planning to play much of their postseason in California.

With the awful air quality in Seattle postponing tonight's game between the Mariners and Giants, the question of how the West Coast fires will affect MLB down the stretch is very real, particularly with the ALDS and ALCS scheduled in California.

Maybe MLB will have a public protocol on air quality by that point. Or maybe they won’t.