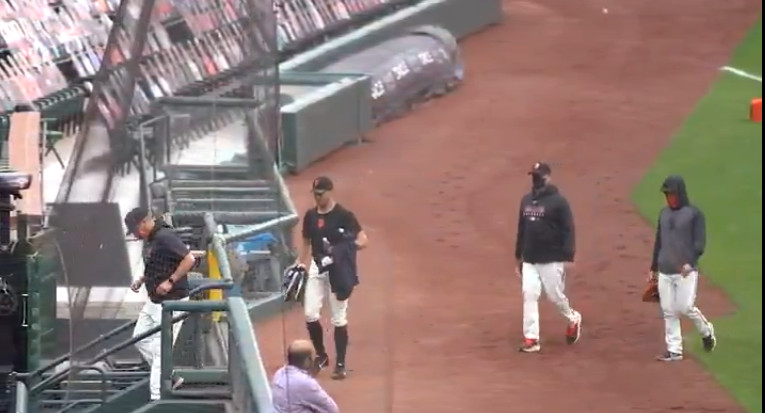 The Milwaukee Bucks’ protest Wednesday that saw them sit out Game Five of their playoff series against the Orlando Magic in protest of the police shooting of Jacob Blake led to a lot of effects across the NBA world, from other teams declaring they’d also sit out to the league eventually deciding to postpone all of Wednesday’s games to Inside The NBA analyst Kenny Smith walking out in support of the players. And it’s led to impacts in other sports as well, including some notable ones in Major League Baseball.

The Milwaukee Brewers became the first MLB team to say they wouldn’t play Wednesday, and their opponent, the Cincinnati Reds, agreed to just postpone the game rather than take the forfeit win. Other teams soon followed in opting not to play: the Seattle Mariners, the San Diego Padres, the San Francisco Giants (seen above leaving the field ahead of batting practice), and the Los Angeles Dodgers. Here are some details on those moves:

The Reds have agreed not to play as well. No forfeit situation. Both teams have agreed to sit out tonight’s game. https://t.co/BZJAg8GujJ

The Seattle Mariners will not play tonight's game against the San Diego Padres after Mariners players agreed to postpone it.

Here's video of the #SFGiants' team meeting on the field before BP, followed by both clubs completely clearing the field pic.twitter.com/qvZTpICu0a

BREAKING: The Dodgers vs Giants and Mariners vs Padres games will be postponed tonight.

All other MLB games will be played tonight.

Update: And here’s MLB’s official statement on that postponement:

Here’s Dee Gordon of the Mariners on why they chose not to play:

There are serious issues in this country. For me, and for many of my teammates, the injustices, violence, death and systemic racism is deeply personal. This is impacting not only my community, but very directly my family and friends. Our team voted unanimously not to play tonight

Some other players opted out while their clubs continued to play. That list includes Jason Heyward of the Chicago Cubs and Matt Kemp of the Colorado Rockies:

According to the Cubs, Heyward and Ross spoke about it and Heyward decided not to play. https://t.co/soL0ZvfVPO

And Dexter Fowler and Jack Flaherty of the St. Louis Cardinals are in that group as well:

We’ll see if there are impacts to MLB games beyond Wednesday.