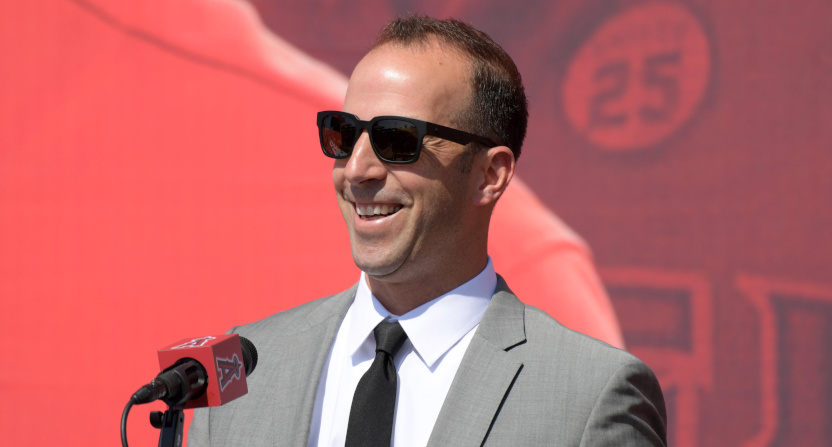 It’s not necessarily unexpected that the Los Angeles Angels made the call to fire general manager Billy Eppler (seen above at an April 2019 press conference announcing Mike Trout’s extension) following this season, which saw them finish with a 26-34 mark (fourth out of five teams in the AL West) and miss the playoffs (as they have every season in Eppler’s five-season tenure there). What’s a little more unusual is that the news of his firing also came with the news that they’d given him a one-year extension earlier this summer. Here’s more on that from Alden Gonzalez of ESPN:

The firing surprisingly comes with one year left on Eppler’s deal; the Angels quietly extended Eppler through the 2021 season over the summer, a source confirmed to ESPN. Eppler, who finished his fifth season with the organization, was on an expiring contract when the year began.

While whether Eppler had a year left on his contract or not doesn’t really matter in actual terms to anyone other than Eppler (who now will get some level of payout) and Angels’ owner Arte Moreno (who will be the one paying him), that quiet extension is perhaps notable as a sign of the back-and-forth approach this team has taken. Back in February, as Fabian Ardaya of The Athletic wrote then, Eppler was known to be on an expiring contract, and Moreno was known to be involved in front office moves, ordering Eppler to pull out of a deal with the Dodgers that would have netted the Angels Ross Stripling, Joc Pederson and outfield prospect Andy Pages in return for infielder Luis Rengifo and a lesser prospect. So there didn’t seem to be a ton of confidence in Eppler then, and it’s interesting that Moreno would both stick with him after that and then give him an extension this summer, only to let him go after this season.

And to be clear, Eppler’s record can be criticized. While he managed to land some top talent like Anthony Rendon in free agency and rebuild the Angels’ farm system from last in MLB shortly after he took over to 16th entering this year (as per Baseball America) and sign Trout to that aforementioned long-term extension, he missed on a number of pitching moves.  Particularly, Eppler missed with the signings of Matt Harvey, Trevor Cahill and Julio Teheran. And the pitching roster (and especially the mediocre bullpen) wound up being a key part of what doomed the Angels (and also the Philadelphia Phillies) this year, as Zach Criser wrote at Yahoo Sports earlier this week:

High-leverage situations — at-bats where games have the most potential to shift — offer a revealing if chaotic glimpse into what happens when teams are making their biggest choices. And across baseball, these moments are increasingly handled by relief pitchers. In 2015, the year before Eppler and [Phillies’ GM Matt] Klentak took their current posts, starting pitchers still faced 40 percent of high-leverage batters. By 2019, that number was down to 28.5 percent. And this season so far, it’s at 27.5 percent.

So the seemingly fungible, here-today-gone-tomorrow arms who couldn’t possibly be as important as Trout or Harper or Realmuto, they are largely responsible for a huge portion of a team’s season-defining performances. This year, the Phillies are allowing a league-worst .318/.397/.529 slash line in those crucial spots — that’s 43⅔ innings worth. The Angels aren’t doing a whole lot better, .285/.354/.492 in 50 innings. Meanwhile, the nameless Tampa Bay Rays have suffocated opponents with a .171/.256/.257 line.

The difference in Mike Trout making the playoffs and not? It’s in there somewhere, built from an unsatisfying pile of broken bullpen innings.

But it’s worth asking how much of that is on Eppler and how much of it is on Moreno. The Angels tried hard to get Gerrit Cole this offseason, but were outbid by the Yankees, and they reportedly had talks with Zack Wheeler, Stephen Strasburg, Madison Bumgarner, Dallas Keuchel and Hyun-Jin Ryu. But they didn’t land any of those guys, and even that trade for Pederson and Stripling wound up nixed by Moreno. (And while that wouldn’t necessarily have solved much, as both of those players struggled this year, so did Renfigo.)

And yes, while most of Eppler’s pitching free agency signings didn’t work out well, a lot of those signings were guys with significant question marks and lower levels of interest in them elsewhere. They were gambles rather than more-likely results (which would have cost more). And the Angels have also been notoriously cheap elsewhere, including with large-scale furloughs of scouts and other employees ahead of this year’s draft. If Moreno had proved as willing to spend on pitching and scouting as he was to spend on hitters like Rendon and Trout, maybe things would have gone better for the Angels. And whoever replaces Eppler as Angels GM (there’s quite a bit to suggest that could be Dave Dombrowski) may need some more ownership backing to improve their pitching staff.