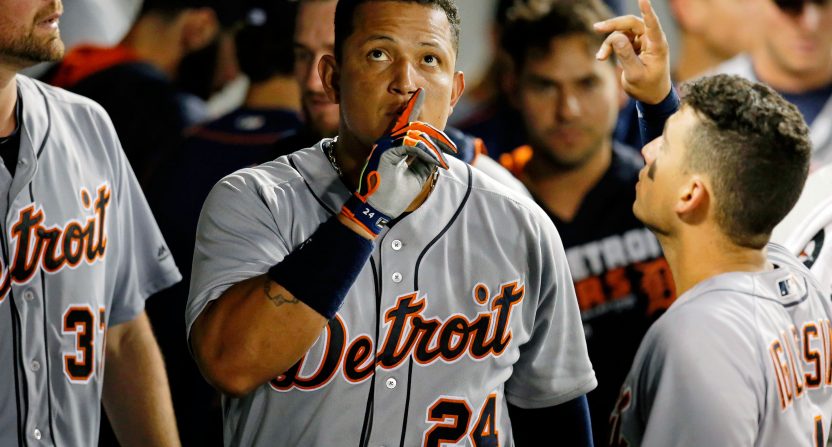 Welcome to the third edition of The Comeback’s MLB preview series, in which we ask our writers to banter by email about a given division, then publish the results here.

Previously, we looked at the AL East and the NL East. Today, Alex Putterman and Ian Casselberry preview the American League Central.

Alex Putterman: The Cleveland Indians won 94 games last year, won the AL Central by eight games, stormed to the World Series and almost won it, then added Edwin Encarnacion to an already-loaded roster.

Is there any reason they won’t run away with this division once again in 2017?

Ian Casselberry: I sure don’t see it. The AL Central looks like the least competitive division in baseball going into the season.

As a Tigers fan, I would love to believe that Detroit can give the Tribe a run here. But in finishing eight games behind Cleveland, the Tigers went 4-14 against them last season. Meanwhile, the Indians got better, and I don’t see how the Tigers improved. The Royals have an intriguing lineup, but I don’t believe their pitching can compete. And the rest of the division looks like it’s rebuilding.

AP: Since the Indians are almost uninterestingly good, let’s talk about the Tigers. Since winning their fourth straight division title in 2014, the Tigers have been in this impractical purgatory between contending and rebuilding. On some days they seem committed to winning, and on other days—such as when they traded Yoenis Cespedes and David Price—they appear to be looking toward the future.

With Justin Verlander and Miguel Cabrera locked up until the 23rd century (or something) and a number of other veterans stuck on a mostly uninspiring roster, what exactly is this franchise doing? And does the death of owner Mike Illitch, who famously hoped to win a World Series before he passed, have any impact on the Tigers’ direction?

IC: You said it. The Tigers have put themselves in a nearly impossible position where they’re arguably good enough to contend for a wild card bid, yet should really look more toward the future. All indications were that general manager Al Avila wanted to sell off some players during the offseason, but some contracts (Justin Upton) are difficult to unload, while trading Miguel Cabrera and Justin Verlander doesn’t seem to be an option.

Trying to save money is why Detroit traded Cameron Maybin, but that left a big hole in center field that hasn’t been filled. Considering the front office wasn’t able to trade anyone else (like J.D. Martinez, Ian Kinsler or Francisco Rodriguez), dealing Maybin now looks pointless. That leaves hoping for guys like Upton, Anibal Sanchez and Jordan Zimmermann to rebound. There’s really no other choice.

Mike Ilitch’s death does put the franchise in some uncertainty. The prevailing thought is that his son won’t be as willing to spend money in an all-out effort to win a World Series. There’s even some belief that Christopher Ilitch would ultimately prefer to sell the team, though the Tigers are such a big part of the Ilitch portfolio. At the very least, he could be more willing to commit to a rebuild and let Avila trade big names than his father was.

AP: The bright side for Detroit is that, as you mentioned, this division is awfully weak after the Indians. The Tigers’ primary competition for second place is the Royals, and they have a very similar set of problems: a veteran core used to winning but not nearly a deep enough roster to rank among serious World Series contenders.

On paper (and according to FanGraphs and Baseball Prospectus projections) the Tigers look like the superior team to the Royals, but Kansas City can certainly be pesky. Which team do you think has more credible playoff aspirations?

IC: I tend to lean toward the team that has a better bullpen, and the Royals have a superior relief corps to Detroit. But in this case, I think Kansas City’s starting rotation is an issue that can’t be overcome, especially compared to the Tigers. Granted, Detroit has some question marks in its starting five, but I give them the edge based on past performance. I think a subpar rotation costs a team more over the course of the regular season.

The Royals’ lineup could be better than I’m predicting, and there could be something of a last hurrah mentality with Eric Hosmer, Lorenzo Cain, Alcides Escobar and Mike Moustakas set to be free agents after the season. But the Tigers can win games if their pitching doesn’t come through on a given day, and I don’t know if the same can be said for Kansas City.

AP: Yeah, I think I agree. It’s difficult to have a bad starting rotation with Verlander and Michael Fulmer at the top, even if you’re going to wind up with more Matt Boyd and Anibal Sanchez than anyone would ever want to.

To me, the most intriguing team in this division is Minnesota. After a surprising 2015 season, the Twins were supposed to be at least respectable last year. Instead, they were terrible from the start. Even worse, Miguel Sano took a major step backward, Byron Buxton failed to progress as expected and Jose Berrios was a disaster. Still, there’s enough young talent here—led by those guys and Max Kepler—that Minnesota might be my pick for the 2020 AL Central title.

Could the Twins be a sort of sleeper? And how would you compare Minnesota to the other rebuilding team in this division, the White Sox, who just traded away two of their best players for some hefty returns?

IC: I agree that the Twins are a curiosity. If all of their young players bounce back, they could have a similar surge to 2015. Maybe we’re even talking about the best lineup in the division. (OK, second best, at best.) And if that’s the case, Minnesota will win some games they shouldn’t and rattle some cages among the AL Central’s top three teams.

But I’ll point to the pitching again. This team is still recovering from years of Terry Ryan believing that a starting rotation could be built without any strikeout throwers. Perhaps even worse, that philosophy seemed to apply to the bullpen as well.

Yet at least there’s some promise for the future in Minnesota. What is there with the White Sox? They traded Chris Sale and Adam Eaton to kickstart the rebuild and got some fantastic talent in return. But they still seem to be in a similar position as the Tigers, where they need to commit to one direction or another. What are Todd Frazier and David Robertson still doing on this team? Both likely won’t be on the roster by July 31. By the time the White Sox truly overhaul the team, maybe they’re in a better position than the Twins.

AP: Yeah, I don’t think the White Sox’ rebuilding process is anywhere near complete, but they’ve already done an excellent job in turning Sale and Eaton into Yoan Moncada, Michael Kopech, Lucas Giolito, Reynaldo Lopez and more. If they can get respectable returns for the guys you mentioned, plus Jose Quintana, it could be a fruitful rebuilding process on the South Side. If the Twins are my 2020 AL Central pick, maybe the Sox can be my 2022 AL Central pick.

However, we’re here to preview 2017, so let’s get some predictions for the upcoming season. Give me your predicted order of finish for the AL Central, plus the division’s Player of the Year, Pitcher of the Year and under-the-radar player to watch.

IC: I feel like most of my picks are chalk, but that’s what the AL Central looks like this year.

AP: Mine are only slightly different.