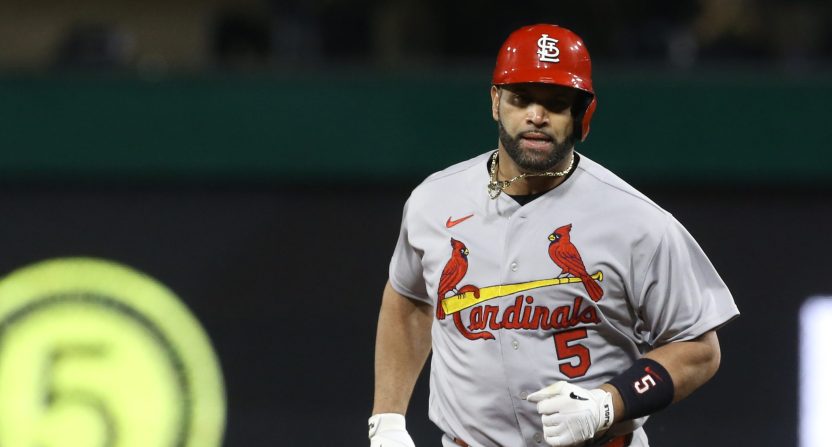 Albert Pujols is heading into retirement getting any legendary feat he can. Amid a monumental tear the second half of the MLB season, Pujols hit his 700th home run over a week ago and the day after hit his 2000th RBI. Pujols joined some elite company on both stats and he set his sights on passing one of the greats before totally hanging up the cleats.

Sunday night, Pujols hit his 702nd home run and batted in his 2,214th run. That tied Pujols with Babe Ruth for second all-time in RBI. On Monday, Pujols wasted little time against the Pittsburgh Pirates as he broke a 0-0 deadlock with a two-run home run in the sixth inning. That not only put the St. Louis Cardinals in front but it firmly put Pujols in second on the all-time career RBI list.

Albert's not done yet! pic.twitter.com/tqwB8p7EDR

Unless he has a change of heart and decides to play next season, Pujols isn’t going to catch The Babe in home runs. He’s also not going to catch RBI career leader Hank Aaron (2,297) but ending up fourth in home runs and second in RBI is something to be proud of.

While ESPN feels like everyone needs to watch Aaron Judge ground out as he goes for a home run “record,” others are praising Pujols for his greatness as he passes fellow greats.

Well it’s not everyday that you see a man pass Babe Ruth in anything. The great Albert Pujols has now passed the Babe in RBI’s. It’s an amazing thing to watch!

By far the most underrated story of this baseball season is Albert Pujols surpassing Babe Ruth in career RBI. Wow. Did not think anyone was going to do that. It’s Ruth. And it’s for second all-time.