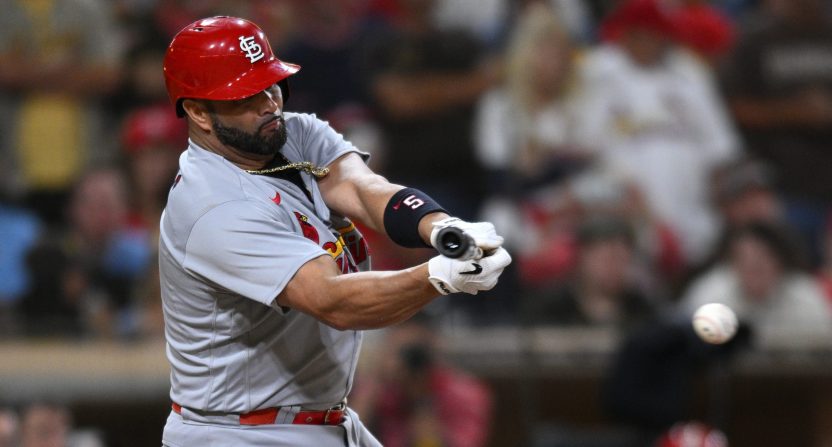 Albert Pujols is two home runs away from 700 for his career. He hasn’t hit a home run in the St. Louis Cardinals‘ game against the San Diego Padres on Wednesday night at Petco Park. But, he did ruin a potentially historic moment for the opposition.

Pujols broke up a no-hit bid from San Diego left-hander Blake Snell with two outs in the top of the seventh inning.

On a 3-1 count, Pujols went with a 98 mph fastball out of the zone and poked it through the right side for a single.

Albert breaks up the no-hitter in the seventh.

The Cardinals’ Juan Yepez followed up with a single in the ensuing plate appearance.

Snell finished the night with a line of seven innings pitched, two hits allowed, no runs allowed, two walks, and 13 strikeouts. Even though he lost the no-hitter, he surely wouldn’t have been able to go nine innings. The Pujols single came on pitch 108, and Snell finished with 117 pitches thrown. His previous season-high pitch count was 108 in July.

This was the latest point in a game that Pujols has ever broken up a no-hitter in his illustrious 22-year career.

This is the latest in Pujols' career that he's broken up a no-hit bid. The previous latest was when he homered off Dustin Hermanson of the Giants with 1 out in the 7th inning on July 23, 2004.

And it continues an incredible final season for Pujols.

After struggling over the past several seasons, Pujols has had a revival in his return to St. Louis. He’s put together a .262/.338/.3513 slash line and 138 wRC+ this season for the first-place Cardinals.