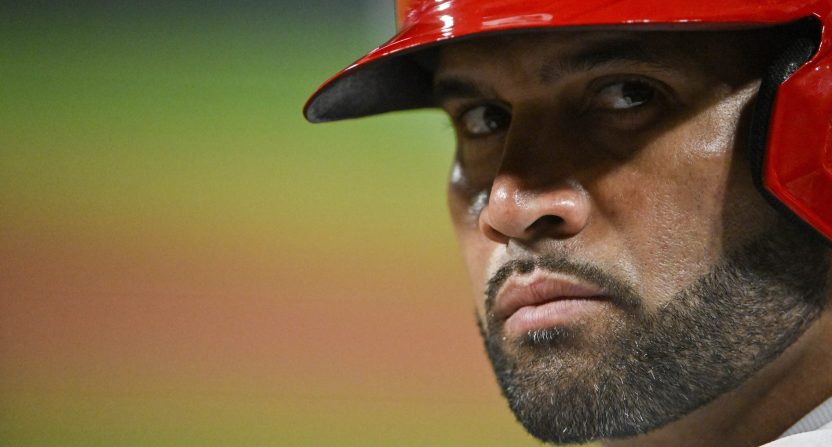 The St. Louis Cardinals had a historic night in their 6-5 win over the Cincinnati Reds.

Albert Pujols is turning back the clock as the 42-year-old is in a race to become the fourth player to reach 700 home runs before he wraps up his 22-year MLB career. In the sixth inning, Pujols belted his 698th homer to tie the game. This came two days after Pujols became the third player to hit for 2,200 RBI, with the other two being Hank Aaron (2,297) and Babe Ruth (2,213).

It’s difficult to outshine Albert Pujols but Ryan Helsley did that by pitching the 110th immaculate inning in MLB history.

Many showed their appreciation for Pujols and Helsley for what they’ve done.

I cannot help but be impressed by Pujols. I’m just thankful this ridiculous stupid improbable season is not happening when the Cubs are battling for a playoff spot. pic.twitter.com/jGHkokUrpZ

Not only does he keep doing this… he keeps doing it in big moments for the team.

It's always either to tie or take the lead. Pujols is unreal.

I have never rooted for Albert Pujols before. He made me very angry many times as a kid. But I am rooting so hard for him to pull this off. What a run he is on. https://t.co/guv13IJ6PB

The final three months of Albert Pujols' career deserve a plaque in Cooperstown next to Albert Pujols. What a legend.

Well, that was one heck of a night at the ballpark.

Nolan Arenado made one of the most insanely good plays at third base anyone has ever seen.

That's a heck of a way to end a ball game. Ryan Helsley shoves an immaculate inning against the heart of the Reds order to close out the ninth. He topped out at 101.7 MPH.

Ryan Helsley is IMMACULATE IT'S UNBELIEVABLE

Just when you thought the history has ended for the evening pic.twitter.com/BRkfoVBqFs

Immaculate inning for Ryan Helsley to end it. Incredible. #stlcards

Before the All-Star break, it would’ve been a tough ask for Pujols to reach 70o home runs. Now, Pujols has 13 home runs since July and with 17 games left in the regular season, it’s entirely possible that he hits those two by the end of the season. The guy has hit three home runs since last Saturday so if he keeps up this form for just another week, he’ll hit that milestone.