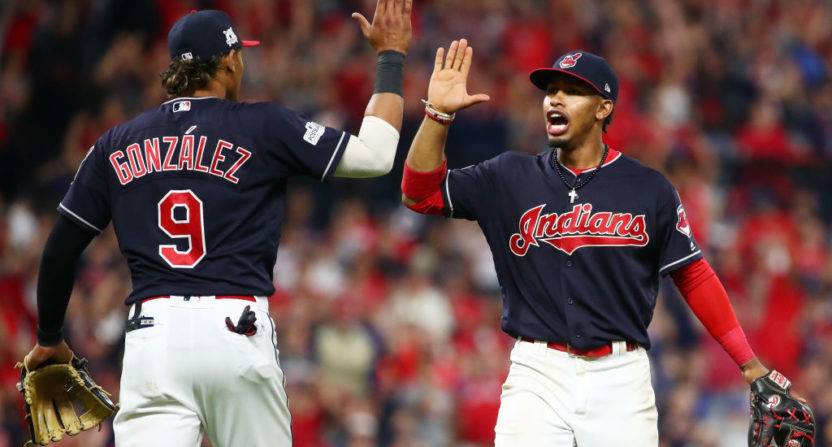 When the top eight MLB teams played on the same day, did you expect anything but drama? From the Indians walking off, to the Red Sox and Yankees digging themselves into an 0-2 hole, to the NLDS finally kicking off, here’s everything you need to know about Friday’s slate of incredible postseason baseball.

Dallas Keuchel twirled a one-run gem against the Red Sox, squashing Boston’s chance of tying the series at one by punching out seven batters over 5 2/3 innings. Astros fans witnessed what they’ve been waiting for — Carlos Correa and George Springer breaking out and clobbering homers as early as the first inning. Correa and Springer each went 0-for-4 in Game 1, while the latter struck out three times. It was nice to see these powerful, young assets connect at the dish as the Astros inch closer to the ALCS.

A little oppo #SpringerDinger has the @astros rollin’. #ALDS pic.twitter.com/FwWnTAsNZH

Meanwhile, the Red Sox appeared lost. Already playing from behind, the desire and determination to gather momentum was absent. The only man in the lineup that batted runs in was Jackie Bradley Jr., once in the 2nd and again in the 9th. The Red Sox have young stars of their own in Mookie Betts, Andrew Benintendi and Rafael Devers. But two out of three of those clutch hitters are playing in the postseason for the first time, possibly explaining their goose eggs at the plate.

The Red Sox have one last chance to avoid getting swept in the ALDS in back-to-back seasons. They’ll turn to righty Doug Fister over last year’s Cy Young winner Rick Porcello for the job. Why? Fister jumped back and forth from a starter to a reliever and back to a starter for the Red Sox. He had a good August (2-2, 3.71 ERA) but hasn’t given up less than three runs since Sept. 6. Porcello, on the other hand, closed the season on three wins. This could be the Trevor Bauer for Corey Kluber switch the Red Sox need, or it could shake out predictably (and poorly). Regardless of who’s on the hill, Boston’s lineup needs waking.

Look around Progressive Field on Friday night in the 13th inning to understand the true definition of sport stress. The Yankees and Indians gave us the biggest nail-biting game of the postseason (so far) by dueling into extras while fans anxiously wondered, “How did we get here?” The Yankees built a lofty 8-3 lead on homers from Gary Sanchez, Aaron Hicks and Greg Bird, all of whom experienced their first postseason jacks.

Against a team that omits the word ‘quit’ from its vernacular, it still wasn’t enough. Francisco Lindor mashed a gigantic grand slam that bounced off the foul pole in the 6th, bringing the Tribe within one run of the Bronx Bombers until Jay Bruce added a solo shot in the 8th. The blame’s on Yankees manager Joe Girardi for the grand slam, after he failed to challenge a controversial hit-by-pitch during Lonnie Chisenhall’s preceding at-bat.

Soon, the squads found themselves in a stalemate for five intense and agonizing innings. Yankees closer Aroldis Chapman shut the Tribe down for two innings before reliever Dellin Betances gripped the ball for one inning too many. The righty gave up a walk-off single to Yan Gomes in the 13th and the Indians opened the flood gates for a warranted celebration. The Tribe are now just one win away from the ALCS, in hopes of retribution for last year’s championship heartbreak.

The Cubs showed us that sometimes baseball, much like life, is unfair. Nationals’ ace Stephen Strasburg carried a no-hitter into the 6th, striking out eight batters along the way. Rhythm and structure were on his side, but Washington’s bats were not. The Nationals went 0-for-2 in RISP and stranded six on base in the midst of getting shut out. Kris Bryant and Anthony Rizzo teamed up to plate the only runs the Cubs needed to hand Strasburg the loss.

We saw a glimpse of Kyle Hendricks’ magic in the Cubs’ victory run, and on Friday he picked up right where he left off. The 27-year-old Dartmouth graduate blanked the Nationals on seven innings of two-hit ball. Hendricks struck out top dogs in Bryce Harper, Daniel Murphy and Trea Turner in the process.

The @Cubs are not messing around. They fire zeros to start their #WorldSeries defense. https://t.co/FDctWeCVn4 #SavorTheWin pic.twitter.com/rEaZMcIykw

Even though this was only Game 1 of the NLDS, Chicago dominating looked all too familiar. The Cubs’ quiet composure and timely hitting reminded us of last October. The Nationals are facing reality — this isn’t the easy NL East division they romped through the regular season against. The Cubs know what it’s like to leave your all on the field. The Nationals need an edge if they want to advance.

After the bizarre D-backs-Rockies wild card game, we came into the NLDS thinking Arizona had the means to shake up the division. Well, they put up a solid good fight Friday against a near-flawless team that finished the season on a .642 winning percentage.

Justin Turner cranked a three-run jack in the first inning off Taijuan Walker and forced the 25-year-old to exit after the third out of the frame. Yasiel Puig whacked a nutty triple while Corey Seager went 2-for-4 with two RBIs and three runs.

Entering Friday, Clayton Kershaw had given up 10 home runs over the course of 10 postseason games. Then he had the pleasure of facing A.J. Pollock and J.D. Martinez. The heart and soul of the Arizona lineup proved it can rupture a three-time Cy Young winner by notching four home runs against him. But the Dodgers managed a 9-5 win thanks to contributions from up and down their lineup. Offensively, D-backs did some damage too. This may be one of those matchups that can turn on any moment.