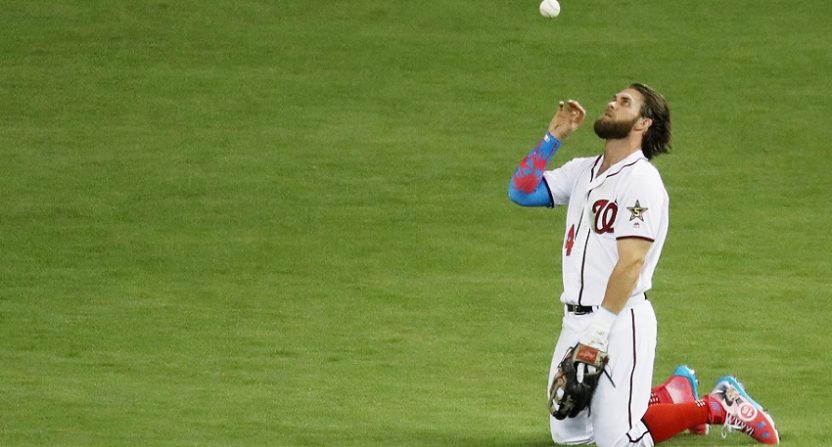 The All-Star Game is stupid. There, I said it.

I have been a baseball fan for 40 years, and part of the appeal of the game is that, just about every day from early April to the end of September, I can either root for the Red Sox or root against the Yankees, almost without a day off. Except, of course, for the three days in the second week of July, when everything grinds to a halt so a bunch of guys can get together and play a game that none of them care about.

I never really liked this thing, even as a kid, when I found it to be an affront to the whole spirit of the game in the first place. And that was when the guys who were actually the best players in either league — i.e., the very reasons why anyone might tune in to watch — would play for more than a few innings. In fact, they might even stay there the whole game, which is how catcher Ray Fosse’s career ended, because Pete Rose knocked him over in a play at the plate during the 1970 edition. This collision, mind you, occurred in the 15th inning.

How many future Hall of Famers (I know, I know, but come on) do you think would be involved in such a play these days? Are you guessing zero? Because I am.

Of course, this is all long before rosters were expanded to three dozen a side, it became a glorified Little League game in which everyone got to play and the best players were already on chartered flights home after the fourth inning, and the game was ultimately decided by the one player on a last-place team who was having an even passable season because everyone has to be represented for some reason. Oh, and there’s also the fact that a fourth day was added to an already interminable mid-summer stretch where we were all deprived of meaningful baseball.

In the interest of fairness, I do not single out the MLB affair as the only ridiculous such endeavor. They’re all terrible. I don’t watch the NHL to see two teams figure skate to a 17-14 final, the NBA edition is an increasingly tedious series of alley-oops and dunks, and the less said about the Pro Bowl, the better for everyone. I don’t care how much you might enjoy seeing Chris Berman in an ill-fitting Hawaiian shirt. But all that said, there is something especially brainless about the baseball edition.

For one thing, it falls during the one time per year when baseball is operating without any competition on the sporting front. With apologies to the MLS, WNBA, and NBA Summer League (It’s FaaaaaaaaaaanTAStic!), sports fans have exactly one viewing option at this time of year, so, obviously, the best and smartest thing to do is to take it off the air for four days, leaving nothing else to watch except something called The ESPYs, an event that is apparently some kind of award show meant to hand out prizes to athletes and teams, which only confuses me because I thought that’s what the Stanley Cup, World Series, Super Bowl, NBA Finals, and various NCAA, golf, and tennis tournaments were for.

By “best” and “smartest,” mind you, I actually mean “worst” and “dumbest,” because why on earth would you voluntarily stop playing the game that owns the attention of any interested sports fan and then not only play a meaningless exhibition for which even the players have indifference, but also add more dead dates to a schedule otherwise devoid of options?

Now, I don’t expect that anyone is going to read this and agree that it’s time to bring the tradition to an end. But at the very least, those with the power to make changes could do so in a productive and entertaining manner. For one thing, let’s stop inviting a representative from every team. Are fans in Oakland really going to tune in because Yonder Alonso is on the team? (And yes, I had to actually look that up.) Will Phillies fans really be tuning in to see if Pat Neshek pitches the seventh? (Same.) I’m guessing no, but, then, I’m often accused of being a cynic.

Shrink the rosters back to 25. Treat it like a real game. Don’t want to hand out World Series home field to the winner? Awesome, but give the players a reason to play. How about, instead of a meaningless, drop-in-the-bucket bonus of $20K for the winners, make it a cool million. You think any player is going to want to come out of the game with that kind of money on the line?

The game did used to mean something to the players, but that was before interleague play cheapened the concept of separate leagues that, otherwise, only met in the World Series. That’s one of the reasons why the games were, for so long, played with and for pride. Back in the old days, it meant something, but those days are long in the rearview mirror.

There was a time that doesn’t feel so long ago, but in fact, is another generation. Back in 1993, the All-Star Game was in Baltimore, and defending World Series champion manager Cito Gaston of the Toronto Blue Jays helmed the AL squad. Mike Mussina was the Orioles’ ace back then, and after Gaston skipped over him as the game’s starter, it became clear as the game rolled toward its end — with the AL taking it, 9-3 — that Gaston was going to flip O’s fans the bird (heh) and not use Moose at all.

So, in the ninth inning, Moose started warming up in the bullpen on his own, and the fans went bananas. Gaston could be seen in the AL dugout, smiling and shaking his head, because there was no frikkin’ way he was going to use Mussina. Because to hell with the fans of one of his biggest rivals, who booed him every time he came to town, and to whom he owed exactly nothing. It was glorious.

But never in a million years would that kind of thing happen today, because nobody cares enough to make it happen. And if they don’t, why should we?

Like I said, stupid. Monumentally, galactically stupid. Moronic, even. But it doesn’t have to be.

Neil Turitz is a screenwriter and journalist who has been working in and writing about Hollywood for two decades. He is the lead columnist for the website, The Tracking Board, where his work appears every Monday, Wednesday, and Friday, and, despite what this piece might suggest, really does love baseball. Especially the Boston Red Sox.