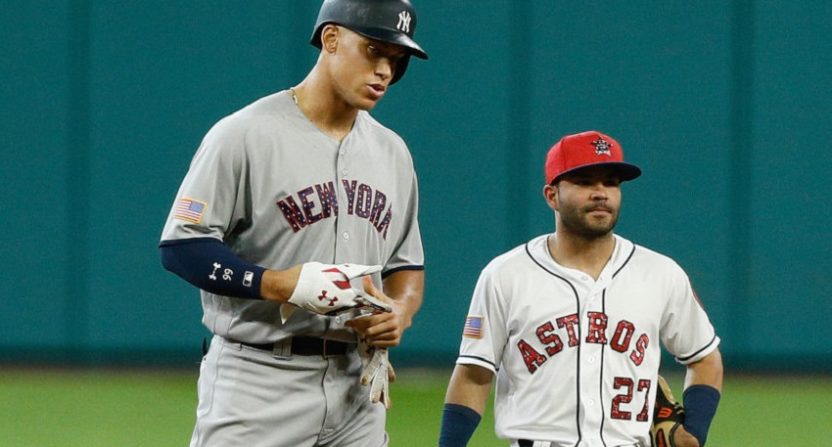 Here are our staff’s picks:

Alex Putterman: This could genuinely go either way between Aaron Judge and Jose Altuve (and don’t forget Corey Kluber), but I’m taking the 5-foot-6 pipsqueak over the 6-foot-7 masher.

Somehow, the diminutive Altuve is nearly as productive a hitter as Judge. Though the second baseman in OPS (1.043 to .965), that difference nearly disappears when you account for Altuve playing home games in the least hitter-friendly park in baseball this year. Statistics that incorporate park factors, such as wRC+, peg Altuve as only slightly behind the powerful rookie in value at the plate. Throw in Altuve’s superior base-running and defense at a premium position and you have an AL MVP.

This kind of a rookie season is not a lucky break, nor is it solely an effect of the possibility of tighter-wound baseballs. This rookie season is exceptional. It’s breaking records. Only two people in history have won ROY and MVP in the same season. Fred Lynn and Ichiro Suzuki. It’s not easy. But if it transpires for Judge (and it should), it’s history.

Matt Clapp: This is a near coin flip between Judge and Altuve in my opinion, but I’ll give the nod to Altuve.

Altuve has been the driving force behind the Astros’ offensive juggernaut, with his power (24 HR, .552 SLG), on-base skills (.413 OBP, and speed (32 SB) at the top of the Houston order. He’s No. 1 in MLB in WAR per Baseball Reference, and second by FanGraphs’ WAR.

And, while I generally hate putting team record into these things (like, Joey Votto shouldn’t suffer in the NL voting just because his team stinks), the Astros have been one of the top three teams in baseball all season, with Altuve being their best player.

Ian Casselberry: My pick is Francisco Lindor. I’m going with the best player on the best team line of thinking here. I realize that teammates Corey Kluber and Jose Ramirez could poke that argument and take potential votes away. Maybe that’s why Lindor isn’t getting the push I think he deserves.

Ramirez has a higher batting average, OPS and WAR than Lindor. Hell, he even has more stolen bases. Lindor does have more home runs, however, with an eye-popping 33, more than twice the number he hit last season. The spike in power probably speaks to home run totals being devalued because so many are being hit.

But in my view, Lindor gets the nod because of his defense. According to FanGraphs, only one other American League shortstop has more Defensive Runs Saved than Lindor, and he ranks third at the position in Ultimate Zone Rating. Combine that with his offensive performance and you have a more complete player than the other AL MVP candidates. Lindor has hit for average and power, has speed on the base paths and helps his pitching staff in the field. No one checks more boxes for his team this season.

While some might look at his second-half performance and high strikeout numbers as a strike against him, the 25-year-old’s power and on-base skills are incredible. Judge broke an MLB rookie record with 50 home runs, has scored a ridiculous 125 runs and is second in the MLB with 124 walks, behind walk-god Joey Votto.

I do want to throw some kudos to Jose Altuve and Jose Ramirez, both of whom also had incredible seasons.