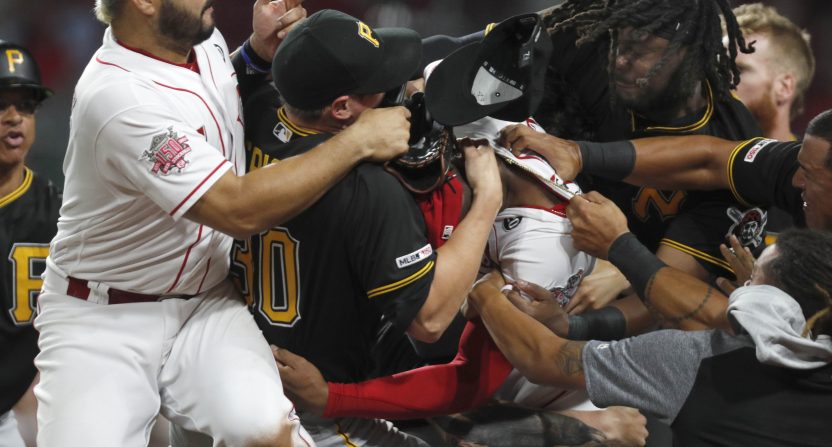 A lot happened in just a few minutes for the Cincinnati Reds on Tuesday night.

First, a blockbuster three-team trade was announced. The main details we’re aware of so far have starting pitcher Trevor Bauer going to the Reds, outfielders Yasiel Puig and Franmil Reyes — as well as pitcher Logan Allen — to the Cleveland Indians, and outfield prospect Taylor Trammell to the San Diego Padres.

What we know:#Reds give up Taylor Trammell, Yasiel Puig; get Trevor Bauer.#Indians give up Bauer; get Puig, Franmil Reyes and Logan Allen.#Padres give up Reyes and Allen, get Trammell.

Not known if other pieces involved.

Well, right after that trade was announced by various reporters to the Twitterverse, a brawl broke out in the Reds’ game against the Pittsburgh Pirates at Great American Ball Park. And that brawl even involved Puig fighting on the Reds’ side… after a trade had reportedly been agreed to (the Reds’ dugout wasn’t aware of this, of course, or else he wouldn’t have still been in the game.).

While on the mound in the ninth inning, Garrett didn’t like some chatter he heard from the Pittsburgh dugout, and went bonkers. The left-hander sprinted toward the Pirates’ dugout and threw some punches, with the benches naturally clearing to form a brawl.

The Reds' and Pirates' benches have cleared. pic.twitter.com/za8hYc0zuX

And. Here. We. Go. pic.twitter.com/xHt3ZXZrrn

Fight began when #Pirates Williams jawed and was ejected. Reds Garrett ran over, whiffed on a punch at Williams.

At one point, Rick Eckstein was on top of David Bell, who eventually escaped and appeared to shout at Hurdle, "You piece of shit."

Garrett and Puig were ejected for the Reds. Yes, Puig was ejected from a game with the Reds for fighting, minutes after we learned he’d been traded to the Indians.

Puig just got traded, ejected and suspended in a five minute span

This is the FIRST pitch Keony Kela threw at Derek Dietrich in a game where the Pirates are leading and Dietrich is pinch hitting. The Pirates were trying to injure him for a pimp job he did…in May. pic.twitter.com/RYEftjbiel

As if there isn't enough going on, Jared Hughes hit Marte in the leg and was ejected. #reds

"It's a shame that this is allowed and that they're able to get away with it. They celebrate it. They support it." – David Bell on the Pirates.#BornToBaseball | #Reds pic.twitter.com/cijoC9ty60

A lengthy suspension is surely coming for Garrett, and it will be interesting to see if one is coming for Puig too. That’s something the Indians certainly don’t want from their new outfielder.

Yasiel Puig apparently will be traded with a suspension to be named later.

Oh, and Garrett was also ejected once for fighting as a basketball player at St. John’s.

Did some quick research to discover that Amir Garrett has now been ejected due to a brawl in two different sports.https://t.co/25gQw5cHFc pic.twitter.com/JryCeAtSaa