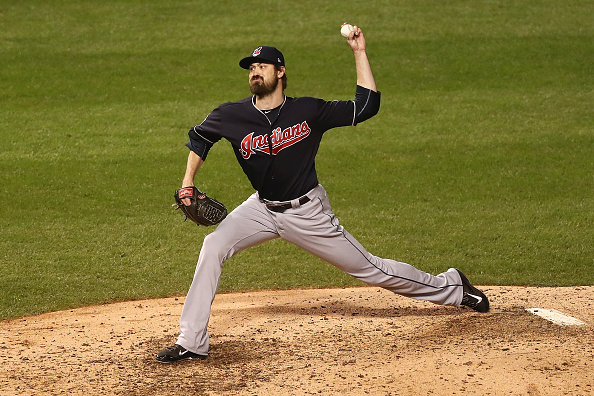 Cleveland Indians reliever Andrew Miller has been dominant through the 2016 MLB postseason and now he has a record to prove it.

Miller set the MLB record by coming out of the bullpen in Game 4 and by retiring six Chicago Cubs batters, two of which came through the strikeout. Those two strikeouts gave him 29 so far in October, breaking the old postseason record of 28 set by Francisco Rodriguez back in 2002.

Heading into Game 5, Miller has 29 strikeouts in just 17 innings of work in the postseason. That’s an insane K/9 of over 15 and well deserving of a record considering he has been on of the most feared, impressive relievers in recent postseason memory.

It’s highly likely the dominant reliever wasn’t happy with his performance in Game 4 as he allowed a solo homer to Dexter Fowler. The one homer, and the fact the Cubs finally gave Miller an ERA above zero, has encouraged the Cubs as they face elimination. Kris Bryant said after the game that Miller is “human now” and that he believes the fact the Cubs have seen him over the past few games that the advantage Miller has is fading.

Will Miller be available should the Indians be in a situation which calls on him in Game 5? The answer is apparently a resounding yes.

Via MLB.com, Terry Francona said he has no issue using Miller despite his multiple innings:

“He’ll be able to be used [Sunday]. We might flip-flop he and Cody [Allen]. Let Cody do some of what maybe Andrew’s been doing. We’ll see how the game’s going. As good as Andrew is, there’s a lot of other guys down there that have done a really good job.”

With a World Series title sitting just one win away, it’s safe to assume the Indians will call on any resource they have to finish off the Cubs. Miller may add on to his record strikeout count before all is said and done, but we’re positive he’d trade any kind of accolade for a ring.