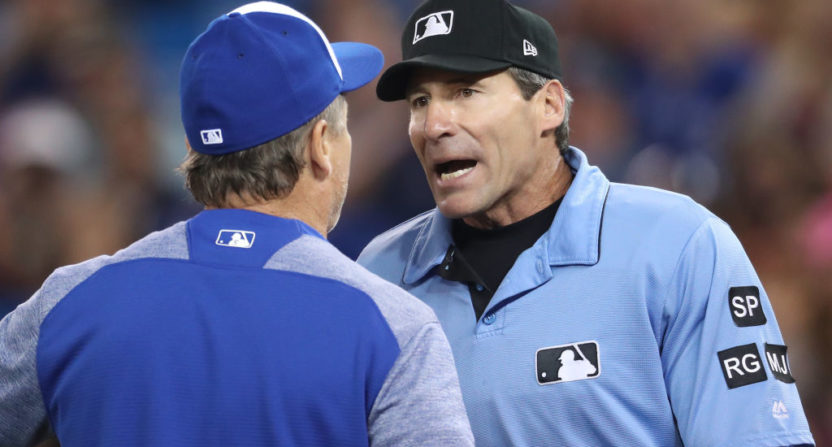 Angel Hernandez is an umpire you’ve likely heard of, and when you’ve heard of an umpire, it’s likely not a great sign.

Hernandez has made some high-profile mistakes, and has a reputation for a bad and/or inconsistent strike zone. None of that really matters, though, when considering the merits of the lawsuit brought by Hernandez against Major League Baseball alleging racial discrimination and bias when it comes to crew chief and postseason assignments.

Via the Cincinnati Enquirer:

Cuban-born Angel Hernandez, 55, states in his suit that he has been passed over several times for a chance to work the World Series despite high marks on evaluations. The suit also charges that even though Hernandez was made a temporary crew chief, it has never been made permanent.

The suit accuses MLB of promoting only one minority umpire to permanent crew chief in the history of the game (a Hispanic) and that only one non-white umpire has worked a World Series since 2011.

There are just under 100 umpires currently on the MLB roster; an Enquirer review of the roster and the photos and biographies attached to it indicates about 10 are African-American or Hispanic.

“The selection of these less qualified, white individuals over Hernandez was motivated by racial, national origin and/or ethnic considerations,” the lawsuit says.

As the story notes, Hernandez filed two complaints in June with the Equal Opportunity Employment Commission as well.

The suit also references Hernandez’s past run-ins with Joe Torre, now an MLB executive with some oversight over umpire assignments.

Hernandez’s suit is going to be an interesting case in how Major League Baseball handles suits and complaints outside the collective bargaining system; Hernandez and his fellow umpires have a union, after all. But again, his data is compelling, and this case will be interesting to follow as it inevitably winds its way through the court system.