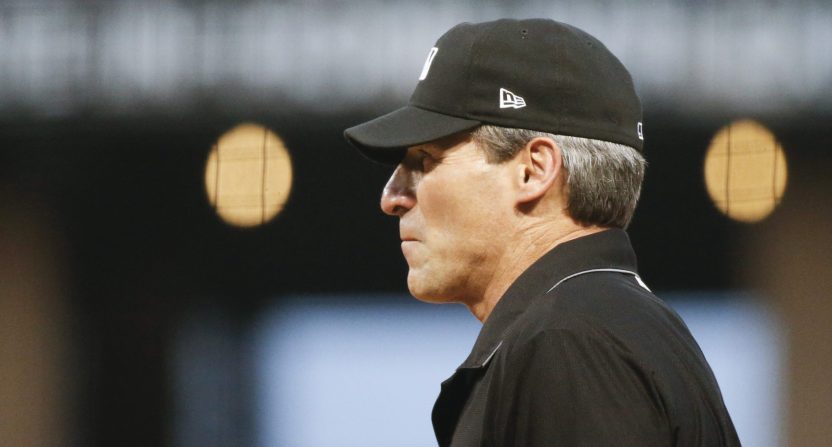 In a season that’s been full of terrible calls from MLB umpires, Ángel Hernández continues to show that nobody makes baffling calls like he does.

Hernández’s latest disastrous call came in the ninth inning of Friday night’s game between the Texas Rangers and Minnesota Twins. With his Twins trailing 6-5 in the ninth inning, Byron Buxton hit a ball down the line that Texas third baseman Josh Smith could not handle. It appeared as though Minnesota had a fast runner on base with nobody out. Only, Hernández ruled that the ball was foul.

In case anyone is unfamiliar with the rule on a play like this, here’s a refresher. If the ball hits the ground before reaching third base — as this one did — it needs to only go over first base to be a fair ball. If any part of the ball bounces over any part of the bag, it’s a fair ball. It doesn’t matter if it lands 15 feet in foul territory. This ball was clearly over the base. And amazingly, it only gets worse.

If a ball does not hit the ground before going over third base, then it needs to land in fair territory to be a fair ball. But if any part of the ball is touching any part of the line, it’s fair. That was clearly the case here. So, even if Hernández somehow missed the fact that the ball hit the ground well before going over third base, he still should have made the right call. He didn’t.

Naturally, baseball fans were not in a forgiving mood.

How does this guy still have a job? https://t.co/IY9lOAoFQl

How do you continue to allow this man to cost players and teams? @MLB
This is terrible.
Went over the bag and landed on the chalk right in front of him https://t.co/cGQdH2DM4t

It doesn’t get much worse than this… https://t.co/OIF6OXtuZ0

As if all of that wasn’t bad enough, there’s something else to consider.

This was a huge call in the game. First of all, it’s not reviewable. So, as bad as it was, the call stuck. Secondly, Buxton ended up striking out and the Twins went down in order to end the game.

Would they have come back to win if the right call was made? It’s tough to say, of course. But ask any manager, hitting coach, pitching coach, hitter or pitcher how significant the difference is between a runner on first with nobody out and nobody on with one out. Now, ask them how significant the difference is when the runner in question is fast and his team is down by one run. It’s massive. That would not be a strong majority opinion. That would be a consensus.

A lot of the bad calls that we’ve seen this season have proven to be relatively minor. Some have happened in blowouts. Others — like one Hernández made recently — were overturned by replay. We’ve also seen instances where a call was missed but the right result ended up happening anyway. Make no mistake, none of those factors make those missed calls any better.

But the fact that none apply here sure makes this one a lot worse.