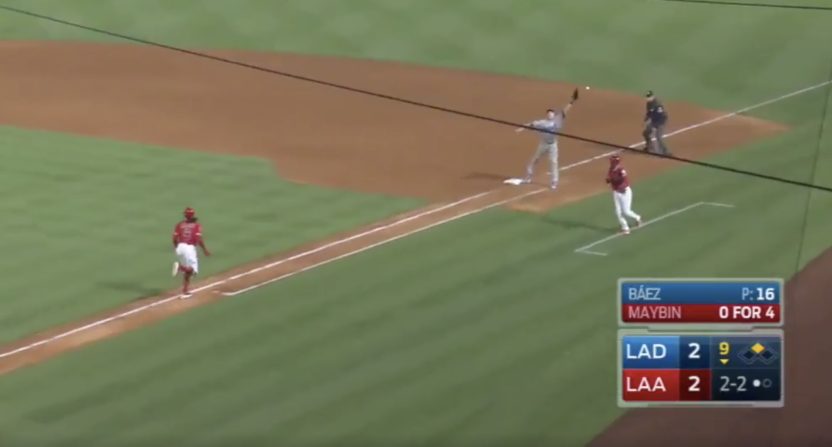 A showdown between the Los Angeles Angels and Dodgers ended in the most Little League of ways possible; a walk-off strikeout.

The Angels had blown a 2-0 lead in the late innings to go into the bottom of the ninth inning tied at 2-2. With a runner on second base (Ben Revere, who reached first base on a throwing error and advanced to second base on a wild pitch), Cameron Maybin struck out swinging against Dodgers reliever Pedro Baez. But the pitch skipped by Dodgers catcher Yasmani Grandal.

For some reason, Maybin just ducked for a moment instead of running his way to first base for a chance to be safe and keep the game alive. Once he realized he could run to first, Maybin made his way up the line but seemed to expect to be thrown out, as is usually the case in these situations. Grandal recovered the loose baseball as Revere was making his way to third base and threw the ball down the first base line to Chase Utley, but the ball got by Utley.

That’s just ugly baseball, but the Angels will take it any way they can.

Grandal gets charged for the error, but after watching the replay as many times as I have by now, it sure seems as though Utley could have done a better job of making the catch.

“That ninth inning was really a turn of events,” Revere said after the game, according to the Los Angeles Times. “I don’t know if [Utley lost his] concentration. Plus, with Cam running, I know Grandal tried to get rid of it quickly. That’s why he airmailed it.”

“He’s going to take this one hard,” Dodgers manager Dave Roberts said after the game, referring to Grandal. “I think Yasmani will be the first one to say he should’ve blocked the ball. It’s a ball that did get to the dirt. I would expect him to take responsibility, and that’s just the type of player he is.”

The way Maybin was running up the line, Grandal probably had just enough time to make a better throw, but that looks like a play Utley needs to make too.

Also during the game, Dodgers fans started waving a giant Dodgers banner in the outfield section, much like a soccer match. It did not go over well with the home crowd.

Some Dodgers fans in the right-field bleachers are holding up a massive Dodgers flag, and Angels fans are booing. Tension at the ballpark. pic.twitter.com/kBhAc4Ps2C

Also, Tommy Lasorda was walking around the stadium.

Whether you're an @Angels or a @Dodgers fan, it's always nice to see Tommy Lasorda at the ballpark. #FreewaySeries pic.twitter.com/hSW2YV1haz